In August 2021, Signify launched a Netherland based lighting company launched new range of Philips Smart Wi-Fi lights in India. They can also be controlled using the Wiz mobile app or voice assistant such as Google Assistant, and Amazon Alexa. 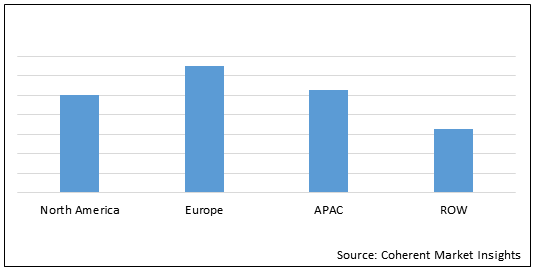 High efficiency and durability of LED lights are expected to drive growth of the global industrial and commercial LED lighting market during the forecast period. LED is considered as a feasible alternative to conventional lighting due to its longer life span and higher energy-saving potential. LED lighting products are increasingly replacing conventional lighting products, owing to various benefits such as greater energy efficiency, high eco-friendly properties, small size, and lower heat output. LED lighting is an advanced and futuristic source of lighting as it reduces power consumption by up to 80% and generates about 90% less heat than incandescent bulbs. The life span of LED bulbs is about 10 times higher than that of compact fluorescent lamps and much higher than incandescent lamps. According to DOE, the widespread use of LEDs could save 348 TWh (compared to no LED use) of electricity which is equivalent to annual electricity output of 44 large electric power plants generating 1,000 MW each and result in a total saving of USD 30 billion at today’s electricity prices.

By analyzing patent filing trends over the last decade from 2000 to 2009, it is evident that LED technology filings dominated the publication trends by a wide margin as compared to fluorescent technology. In 2009, there were 17 patents for incandescent lamps, 122 patents for fluorescent, and 1,584 patents for LED-based lighting. Major companies in the market can capitalize on these opportunities by introducing novel technologies and products and gain a competitive edge in the market. 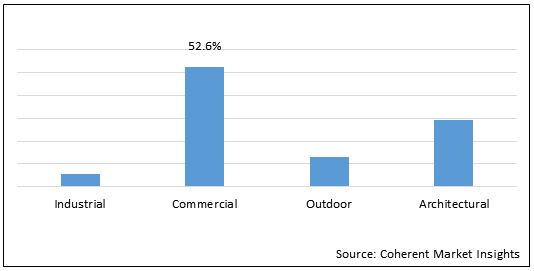 Significant dominance of fluorescent lamps is expected to restrain growth of the global industrial and commercial LED lighting market during the forecast period. Despite its popularity in developed countries, LED technology is still in the nascent stage and has low penetration in terms of technology and dominance as compared to other technologies in lighting. According to Coherent Market Insights’ analysis, in 2012, incandescent bulbs accounted for a market share of 58% in the lighting market, followed by fluorescent lamps with 25%. LED has a market penetration of around less than 10% due to its high cost.

High initial cost is expected to hinder the global industrial and commercial LED lighting market growth over the forecast period. Initial installation and adoption cost of LED is a major restraining factor in the market. A compact fluorescent lamp (CFL) has a shorter life span than LED light. If a CFL is replaced to achieve a lifespan equivalent to that of an LED light, only US$ 2.5 would require as compared to US$ 45, which is the initial purchase price of the LED light.

Major companies are focused on mergers and acquisitions, in order to gain a competitive edge in the market. For instance, in August 2017, Osram Licht AG acquired Digital Lumens, Inc.

Commercial LED lighting is big business and very competitive industry. This type of commercial lighting works by using special lights to create general illumination in large spaces or indoor areas such as walkways, hallways, office cubicles, or even the outdoor deck. If used indoors, it can help increase security by making sure that everyone can see each other when walking through the hallways or the common areas in the office building. The cost of the lights is quite low as well. Some of the benefits of Commercial LED Lighting include improved safety, security, and convenience for employees and clients alike. One benefit that is particularly appreciated by warehouse and office buildings is the reduction of accidents within the workplace. In addition, this type of lighting can help improve the productivity level and efficiency in the workplace as it creates a safer environment for everyone.

Rapid urbanization and economic growth are expected to boost the global industrial and commercial LED lighting market growth over the forecast period. According to the United Nations (UN), by 2050, around 68% of the global population is expected to live in urban areas, adding another 2.5 billion people to urban areas. According to the same source, the global urban population is growing rapidly from 751 million in 1950 to 4.2 billion in 2018. This, in turn, has increased the demand for more commercial and industrial spaces.

Furthermore, growing focus on energy saving is expected to accelerate growth of the global industrial and commercial LED lighting market in the near future.

What are key driving factors in the global industrial and commercial LED lighting market?

High efficiency and durability of LED lights are expected to drive growth of the global industrial and commercial LED lighting market during the forecast period.

What are key restraining factors in the market?

Significant dominance of fluorescent lamps is expected to restrain growth of the market during the forecast period.

What are major opportunities in the market?

Research and development activities among market players is one of the major trends in the market.

Which region is expected to dominate the market?

Europe region is expected to hold a dominant position in the market over the forecast period (2021-2028), accounting for 32.4% share.

What are key players operating in the market?