Industrial Explosives Market Is Expected to Exhibit a CAGR Of 6.2% during the Forecast Period (2021-2028)

The global industrial explosives market is estimated to account for US$ 18,786.74 Mn in terms of value by the end of 2028.

Rising urbanization has led to increasing demand for power. Government authorities need to meet the increasing energy demand with rising population. According to Coherent Market Insights’ analysis, global power generation is expected to witness a significant growth of 19.5% during 2012-2020. According to the U.S. Energy Information Administration (EIA), by 2040, the power generated using coal is expected to account for nearly 29% share in overall generated power, witnessing a decline of nearly 11% in its share between 2012 and 2040. Although there has been effort taken regarding renewable and cleaner energy sources for power generation, coal-fired power generation remains a major source of energy. Therefore, these factors are expected to drive growth of the global industrial explosive market during the forecast period.

Mining activities account for a major share of GDP in several emerging economies such as China, India, Brazil, Mozambique, and Mexico. Governments of the aforementioned countries are focused on unexplored and untapped investment opportunities for mining of mineral resources in order to drive economic growth. Moreover, countries in Central and Western Africa are expected to witness increase in mining output during the forecast period. For instance, in January 2015, the Government of Peru invested around US$ 62 Bn on mining projects to increase the extraction capacity of minerals including zinc, copper, and gold. Therefore, these factors are expected to propel the global industrial explosive market growth over the forecast period.

Asia-Pacific held dominant position in the global passive components market in 2020, accounting for 44.8% share in terms of value, followed by North America, Europe and Rest of the World respectively. 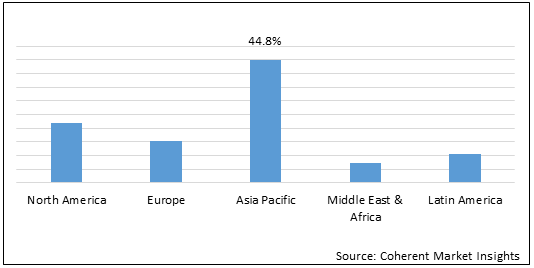 Industrial explosives are made of hazardous chemicals and can release toxic gases such as carbon dioxide and nitrogen oxide. Governments of many countries have imposed stringent regulations on the use and storage of industrial explosives. For instance, in 2014, the Government of Peru government stated that mineral exploration companies need to make an Environmental Impact Declaration (DIA) thereby specifying the number of explosives being used for seismic generation and mining, and their tentative impact on the environment. Therefore, these factors are expected to drive growth of the global industrial explosives market growth over the forecast period.

Global mining industry is cyclic in nature witnessing bust and boom on average seven to nine years. The global mining industry growth is directly proportional to global economic growth. Emerging economies such as China have witnessed slower economic growth in the recent past. Furthermore, in many countries commodity prices have witnessed a decline due to low demand for key minerals. Hence, such characters are expected to restrain growth of the global industrial explosives market during the forecast period.

Key companies are focused on research and development activities, in order to expand the product portfolio. For instance, in 2016, Orica Limited introduced the Vistis Bulk System, a high energy bulk explosive, for application in hard rock metal mines in Australia. In 2013, AEL Mining Services Ltd. launched a pneumatic-powered stope pump to convert chemicals into explosives at the blast site. Furthermore, in 2014, Maxam launched an explosive facility in Mauritania, North Africa to facilitate explosive solutions for the Tasiast gold mine.

Major players in the market are involved in merger and acquisition activities, in order to gain a significant advantage in the market. For instance, in 2011, Orica Ltd. acquired Explosives Limited (XL), a U.S.-based mining and explosives company, in order to capitalize on expected growth in the U.S. explosives market. In 2014, Enaex S.A. acquired Chemtrade, a Peru-based explosives company, to expand its footprint in the region. 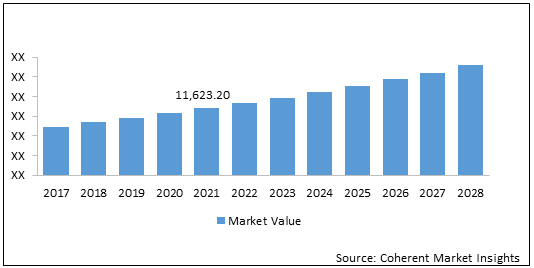 The demand for industrial explosives has increased significantly in the recent past. As a result of this, manufacturers are focused on strategically expanding their capacities and operations. For instance, in 2016, Orica Limited and Yara International ASA established an ammonium nitrate manufacturing plant in Western Australia. The production capacity of the plant is to produce 330,000 tons of ammonium nitrate (AN) per annum. In 2015, Maxam established a production facility for bulk emulsion solutions in Ogdensburg, New York. Moreover, in 2013, the Dyno Nobel Pty Limited established a new production plant for ammonia in Waggaman, Louisiana with an 800,000 metric tons per annum capacity.

Key manufactures of industrial explosives are focusing on product differentiation through innovation by means of investments in Research & Development, value-added product launches, and by exploring novel applications. Major players are focusing on offering high energy explosives, rock fragmentation explosives, and explosives for underwater applications. For instance, in 2014, EXSA S.A. launched an innovative and cost-effective technology, Quantex, which reportedly reduces the cost of rock fragmentation in open-pit mining and construction activities.

Due to Covid-19 pandemic, many industries witnessed significant shift in their business. Due to disruption in the supply chain, metal manufacturers faced difficulties in sourcing of raw material, build trucks and ships that transport goods to consumers. The metal industries have cut discretionary and capital spending in order to support manufacturing operations. Disruptions lead to the huge financial crisis in the industries. For instance, according to World Steel Association data, The US produced 7.2 Mt of crude steel in March 2020, a decrease of 6.0% compared to March 2019. Furthermore, Russia estimates 5.9 Mt of crude steel production in March 2020, down 4.4% on March 2019. Due to supply chain disruptions and reduced demand, the market has negatively impacted. 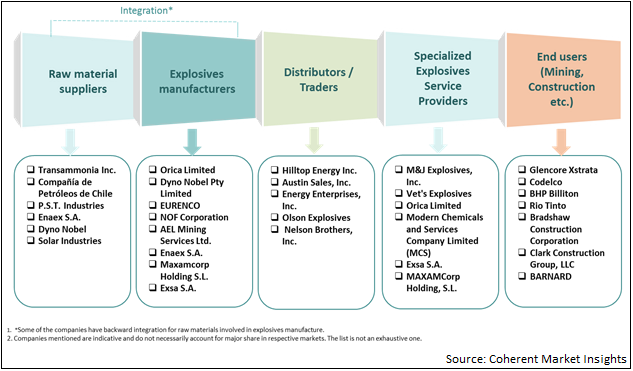 Increasing demand from construction and mining sector are expected to be major factor driving the market growth during the forecast period. According to Coherent Market Insights’ analysis, global construction industry is expected to be valued at US$ 15 trillion by 2025, increasing from US$ 8 trillion in 2012. Developments in mining and construction industry has created lucrative opportunities for the market growth. Furthermore, the ongoing developments in the commercial, and residential and transportation sectors has increased the demand for industrial explosives. Governments of many countries have imposed stringent regulations on the use and storage of industrial explosives. For instance, in 2014, the Government of Peru stated that mineral exploration companies need to make an Environmental Impact Declaration (DIA) thereby specifying the number of explosives being used for seismic generation and mining, and their tentative impact on the environment.

What is the current market size and Compound Annual Growth Rate (CAGR) of the market during the forecast period (2021-2028)?

Which segment, based on type, accounted for the highest demand in the market?

Blasting Agents, segment held the major market share in 2020 owing to extensive use in construction, mining and military applications.

Which are the key factors driving the growth of the market?

Major factor driving the growth of the market during the forecast period is rapid growth of coal-fired power generation.

What is the key factor hampering the growth of the market?

Asia-Pacific industrial explosives market is expected to generate the highest revenue during the forecast period.