Injectable Drug Delivery Market to Surpass US$ 32.5 Billion by 2026

Injectable drug delivery is considered as the most effective route of administration for the effective delivery of drugs to the targeted site, which enhances the patient’s compliance to the drug. The Injectable delivery enhances the rapid absorption of drug from various sites such as subcutaneous, intravenous, and intramuscular. The injectable delivery increases the bioavailability of the drug at the systemic circulation, which offers availability of drug at intended site of action. 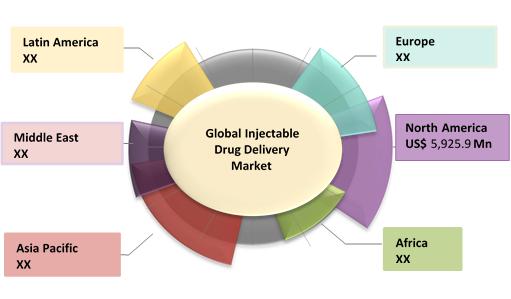 Increasing prevalence of chronic diseases such as diabetes and other diseases is expected to drive the market growth. According to the World Health Organization (WHO), in November 2011, around 60 million people in Europe suffered from diabetes, of which around 10.3% were men and 9.6% were women aged 25 years and above. Similarly, according to World Health Organization (WHO) 2018 factsheet, around 8.5% adults aged 18 years and above had diabetes in 2014 globally.

Moreover, the market players are focused on product development and launch of injectors, which is expected to propel growth of the global injectable drug delivery market over the forecast period. For instance, in 2016, Berlin-Chemie launched BerliPen areo 3 in Germany. BerliPen areo 3 is a 300 unit insulin pen, which can be used with six different insulins in the treatment of type 1 and 2 diabetes. Similarly, in August 2018, Teva Pharmaceuticals received the U.S. Food and Drug Administration (FDA) approval for generic version of Mylan’s EpiPen and EpiPen Jr. Teva Pharmaceuticals is the first generic manufacturer that received the FDA approval.

However, increasing product recalls is expected to hinder the market growth. In December 2012, Bracco Diagnostics Inc., initiated a Class I recall of nine lots of Isovue Pre-Filled Power Injector Syringes, which are to be used with Stellant CT Injection Systems, due to presence of visible particles in syringes observed at the end of standard stability studies on retained samples, according to the U.S. Food and Drug Administration (FDA)

North America holds dominant position in the global injectable drug delivery market, owing to increased focus of regional players in research and development and product launches. In 2017, Bayer received U.S. Food and Drug Administration (FDA) approval for a connected auto-injector-BETACONNECT for relapsing-remitting multiple sclerosis medication and companion app- myBETAapp. The app allows patients to automatically have a record of all their injections and share that record with their nurse or physician. Similarly, in October 2018, Genentech announced the U.S. Food and Drug Administration (FDA) approval for single-dose prefilled syringes (PFS) for Xolair (omalizumab) as an additional formulation for both allergic asthma and chronic idiopathic urticaria (CIU) indications.

Moreover, increasing incidence of chronic diseases such as anaphylaxis, diabetes, and cardiac arrest in the region is expected to support growth of the market during the forecast period. For instance, according to Journal of Allergy and Clinical Immunology, 2014, prevalence of anaphylaxis in the U.S. was 1.6% in the general population, while the number of hospitalizations associated with the disease is ever increasing in the U.S.

Furthermore, increasing initiatives by companies to make auto-injectors available to patients suffering from anaphylaxis is expected to boost global injectable drug delivery market. For instance, Mylan N.V. provides discount cards to epinephrine buyers, and offers discounts up to US$ 300 on branded version of EpiPen and up to US$ 25 on the approved generic version of EpiPen.

Injectables offer maximum bioavailability of drugs towards the intended site of action and avoid the first pass metabolism. The injectable route is mostly preferred for the drugs which can’t be taken orally or have some stability problems. Unconscious patients or patients having low compliance towards oral tablets or capsules can be preferred for the injectable drug delivery therapy.

Increasing prevalence of chronic diseases such as diabetes, cardiac diseases, and anaphylaxis has supported growth of global injectable drug delivery market. According to the Allergy, Asthma & Clinical Immunology, in 2015, around 15 million people suffered from food allergies in the U.K. Similarly, according to the European Academy of Allergy and Clinical Immunology (EAACI), in 2015, around 17 million people suffered from food allergies in the U.K., of which around 3.5 million were children. Increasing awareness regarding safety and concern of needlestick injuries is a major factor driving growth of the injectable drug delivery market. For instance, the WHO recommended the use of safety syringes with sharp injury protection (SIP), in order to prevent needlestick injuries. Similarly, in May 2017, Innovative Neurons LLC announced to commercialize its patented auto retractable multi-needle syringe known as FAST (fast, accessible, safe, and technology) to decrease needlestick injuries. Various market players are focusing on the development and advancement in this space. For instance, ACT-O-VIAL System offered by Pfizer Inc. is a dual-component vial system that allows reconstitution of sterile, injectable medications by pressing on the plastic cap. The facility launch by market players to cater requirements of patients is expected to drive the market growth. For instance, in July 2018, Pfizer, Inc. announced to build sterile injectable pharmaceutical production facilities in the Michigan, U.S.

However, product recalls by the manufacturers is the major factors restraining the market over the forecast period. For instance, in April 2018, Becton Dickson and Company announced a recall of PosiFlush Heaparin Lock Flush Syringe, and Prefilled normal saline syringe, owing to the contamination with Serratia marcescens bacterium.

What are the growth estimates for injectable drug delivery markettill 2026?

The global injectable drug delivery market is estimated to surpass US$ 32.5 Billion by 2026.

Which are the prominent injectable drug delivery market players across the globe?

What are the key factors hampering growth of the injectable drug delivery market?

Increasing product recallsis one of the major factors that is expected to hamper growth of the market over the forecast period.

What are the key factors driving growth of the injectable drug delivery market?

Increasing prevalence of chronic diseases such as diabetes and anaphylaxis is one of the major factors that is expected to propel growth of the market over the forecast period.

What is the Compound Annual Growth Rate (CAGR) of the injectable drug delivery market for next 8 years?

The global injectable drug delivery market is estimated to exhibit a CAGR of 8.3% over the forecast period.

Which region is dominating the injectable drug delivery market growth?

Among regions, North America is expected to hold dominant position in the global injectable drug delivery market over the forecast period.