Halal, in Arabic language, stands for lawful or permissible. Due to unclean food processing & packaging methods, food might get contaminated with bacteria or pathogens. Halal foods are manufactured with stringent halal regulations, which do not allow any haram (unlawful or unsuitable) ingredients to be mixed with the main product. Therefore, halal food products are gaining popularity among consumers, as they offer excellent advantages over most of the conventional food products.

In 2017, Halal Expo Dubai and Salaam Gateway teamed up to increase foreign direct investment in Dubai. The agreement will provide common platform to global investors, exhibitors, and trade visitors to increase awareness about Halal Expo Dubai. Moreover, in 2017, China invested US$ 1 trillion in ‘One Belt One Road’ initiative to accelerate growth of halal food market in GCC. Such activities are projected to have positive impact on growth of the halal food market in MENA.

Stringent halal regulations such as UAE.S OIC/SMIIC 3 are major challenges for small and medium scale manufacturers to compete in halal food market. Moreover, halal food is relatively expensive than its substitutes due to the additional procedures it has to undergo with respect to Islamic laws. Such factors may hinder growth of the market in the near future.

Among product type, meat products segment accounted for highest revenue share of over 51% in the MENA halal food market in 2017. The segment is projected to maintain its dominance over the forecast period, owing to increasing consumption of meat products in MENA region. According to the study conducted by Agriculture & Agri-Food Canada on livestock and meat trends in the Gulf Cooperation Council (GCC), imports of meat & meat products was valued at US$ 5 billion in 2015. 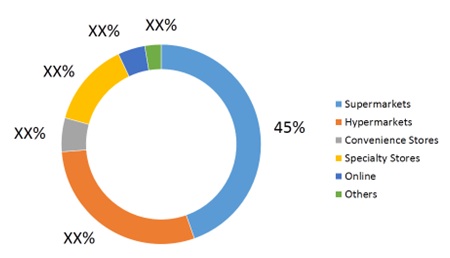 Among distribution channel, supermarkets segment accounted for largest revenue share of 45% in MENA halal food market in 2017. The segment is projected to maintain its dominance throughout the forecast period, owing to growing presence of supermarket chains. For instance, according to the United States Department of Agriculture (USDA) 2017 Report, the total number of supermarkets in Egypt were 1,056 in 2016 and it is increased to over 1,215 in 2016. Moreover, promotional and marketing activities in the form of offering lucrative discounts on products, wide variety of products to choose from, and fair presence of private label products are some of the key factors attributing to the rapid growth of this segment.

Halal food industry is projected to gain major traction in MENA region in the near future due to rapid penetration of halal food distribution channels in the region. Moreover, increasing awareness about halal food and rapid adoption of halal food as safe and natural food are some of the key factors driving growth of the MENA halal food market.