The global microelectromechanical systems (MEMS) market size was valued at USD 23,858 million in 2021 and is anticipated to witness a compound annual growth rate (CAGR) of 9.3% from 2022 to 2030. The growing trend of the Internet of Things is driving the market. Microelectromechanical systems technology is used in a variety of sectors, including telecommunications, display control, navigation and motion control. Furthermore, a growing demand for wearable technologies is expected to boost the growth of the market. Moreover, the rise of the internet of things (IoT) is expected to boost the demand for MEMS devices.

Asia Pacific is anticipated to witness substantial growth in the global microelectromechanical systems (MEMS) market over the forecast period. This growth can be attributed to large number of semiconductors manufacturing industries. Due to the strong presence of automotive components and consumer electronics industries in countries such as South Korea, Taiwan, and China, is driving the microelectromechanical systems technology in the region. Moreover, the low cost of raw materials and labor leading to reduced production cost is also driving growth of the market in the region. 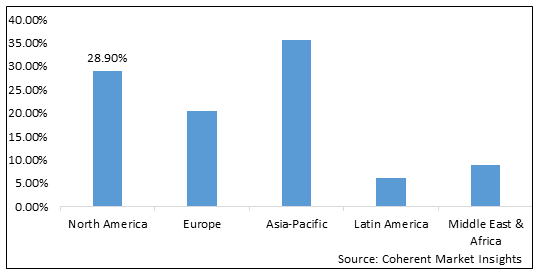 Different types of MEMS sensors such as gyroscope, pressure sensors, and accelerometers among others are utilized in smartphones. The use of these sensors is for keeping track on parameters and to provide a centralized system for automatic control. The companies involved in smartphone manufacturing are increasing the MEMS sensors in smartphones to improve the interface experience as well as to gain competitive edge in the market. For instance, in 2013, Apple became the first major company from the U.S. to launch touch ID having MEMS sensors in iPhone 5S. This trail is being followed by most of the manufacturers in smartphone industry. Thus, this factor will boost growth of the market in the near future.

IoT is known to be the internetworking of most of the applications such as refrigerators, smartphones, microwaves, and buildings. IoT makes use of electronic software, actuators, and sensors to connect all the things to a common network. Internet of Things technology is growing increasingly in terms of amount of connected devices. According to the Coherent Market Insights, it has increased to 23 billion in 2016 from 9 billion in 2012. Thus, rapidly increasing popularity of IoT is expected to propel growth of the global microelectromechanical systems (MEMS) market over the forecast period.

Growing automotive sector around the world is expected to offer lucrative business opportunities in the global microelectromechanical systems (MEMS) market during the forecast period. The automotive industry uses 20 MEMS devices per car. Moreover, the popular concept of autonomous cars is based on the data that is gathered by different MEMS sensors such as accelerometer, speed sensors, proximity sensors, position sensors, and others. Thus, growing adoption of fully autonomous cars is creating several growth opportunities in the market. For instance, in October 2016, Google conducted testing of its driverless car in the U.K. for a 1 km stretch.

Rise in adoption of wearable devices is providing market players with several growth opportunities in the global microelectromechanical systems (MEMS) market. Wearable devices such as heartbeat monitoring devices, wearable fitness trackers, and health trackers comprise several MEMS sensors like temperature detector, speedometer, and accelerometer among others. The use of these sensors is to collect data regarding respective parameters and turn them into digital form to display on the screen. Thus, growing adoption of wearables is creative multiple opportunities in the market.

High demand for smart consumer electronics is a recent trend

Rise in demand for smart consumer electronics is a growing trend in the global microelectromechanical systems (MEMS) market. MEMS are utilized widely in smartphones and wearable devices, as they offered enhanced electrical performance at high frequencies. The consumer electronics industry is increasingly shifting its focus from conventional sensors toward MEMS technologies. Thus, such applications of MEMS are driving innovations and developments in the industry. This trend is anticipated to continue in the market in the coming future.

Companies involved in MEMS industry are increasingly focusing on investing in the R&D of novel offerings for verticals such as aerospace and automotive among others. For instance, in January 2022, Silicon Designs Inc. introduced new MEMS accelerometers for space applications. The Model 1527 series includes novel micro-electromechanical inertial accelerometers, which are tested for radiation and are tactical grade to be used in various space applications such as spacecraft and satellites.

Heating issues of sensors to restrain the market growth

Sensors can cause heating issues and reduce the battery life in devices that are utilized for long time such as laptops, smartphones, cameras, and others. The use of sensors causes reduced battery life in devices, as batteries are used as their power source. Thus such issues of high cost and heating issues related to use of sensors are expected to hinder growth of the market. However, market players are working improving the quality of MEMS for reducing their power needs, which in turn support growth of the market over the forecast period.

The microelectroechanical systems are used for enhancing automation in electronic devices; however, the use of these systems incurs high cost, due to which they are avoided in cost-effective applications. The R&D stage for any type of novel MEMS design or device is highly expensive. The cost of upfront setup for foundry facilities and fabrication cleanrooms of MEMS is also significantly high. The cost of assembly and fabrication units for low quantities is high, which is why MEMS are consider unsuitable for niche applications, as long as the cost is not a hindrance. Moreover, the cost required for testing equipment for characterizing the performance and quality can also be expensive. Thus, this factor is likely to impede growth of the market during the forecast period. 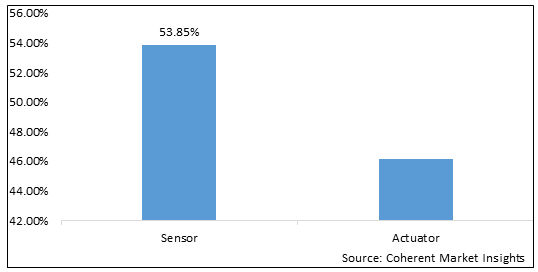 Based on Type, the market is segmented into Sensor (Gyroscopes, Accelerometers, Pressure Sensor, Inertial Combos, Microphones, Magnetometers, and Others); Actuator (Inkjet Systems, Optical MEMS, Oscillators & Resonators, Microfluidic & Biochip, RF MEMS, and Others). Out of which, Sensor is expected to dominate the global market over the forecast period and this is attributed to the widespread use of gyroscope sensors in various applications in automotive, consumer electronic devices, and automation industry among others. The rise in use of smart devices such as smart watches, smartphones, fitness & health device are creating strong demand for sensors, which in turn is driving growth of the segment.

Actuator segment is also expected to witness significant growth in the near future and this is owing to the growing use of optical MEMS and Inkjets systems. The microfluidic & biochip segment is likely to be the highly potential sensor type among actuators.

Based on Application, the market is segmented into Consumer Electronics, Automotive, Industrial, Aerospace & Defense, Healthcare, and Telecommunication. Out of which, Consumer Electronics is expected to dominate the global market over the forecast period and this is attributed to the rise in demand for smart consumer electronics devices. MEMS are largely utilized in smartphones and wearable devices due to improved electrical performance at high frequencies. Thus, the high demand for consumer electronics is driving growth of this segment.

Aerospace & Defense is also expected to witness significant growth in the near future and this is owing to the wide use of sensors made from MEMS in automotive for security and safety purposes, automation, and navigations.

The global microelectromechanical systems (MEMS) market is highly competitive. This is attributed to continuous launch of new technologies due to ongoing R &D and efforts by value chain participants. Moreover, key players are adopting various business growth strategies in order to expand their presence on regional as well as global basis.

Some of the key players in the global microelectromechanical systems (MEMS) market are Nxp Semiconductors N.V., Analog Devices, Inc., and Knowles Corporation

MEMS (microelectromechanical systems) are a type of high-performance electronic device with a wide range of applications. In particular, MEMS are often used for sensor devices. Unlike standard electronic components, MEMS are small and largely integrated in place.

Microelectromechanical systems are used in many fields and are widely found in the aerospace, industrial, and healthcare industries. MEMS are also used in smart wearables. Although the concept of a micro-mechanical device is simple, it is actually difficult to build one. The process starts with a design. Then, the device is fabricated, with an order of mechanical and electronic components. Several different fabrication methods can be used. Silicon-based MEMS are typically produced by patterning the material layers by lithography. Other techniques include evaporation, dry etching, and sputtering. Metals such as titanium, tungsten, and platinum are also commonly used.

The growth of the telecommunications sector and the increasing use of MEMS in automotive and aerospace & defense applications is expected to boost growth of the global microelectromechanical systems (MEMS) market over the forecast period.

However, stringent government regulations and high development costs are expected to hamper the growth of the global microelectromechanical systems (MEMS) market. Consequently, players are working towards developing newer technologies and products to meet the market demands.

Rise in use of smartphones across the globe and rise in popularity of Internet of Things (IoT) are fuelling the market.

Which is the leading type segment in the market?

The Sensor segment is the leading component segment in the market.

Heating issues of sensors and high cost are the major factors restraining growth of the market.