Press Release: Middle East Conveyor Belts Market Is Expected to Exhibit a CAGR of 4.2% During the Forecast period (2020-2027)

Middle East Conveyor Belts Market Is Expected to Exhibit a CAGR of 4.2% During the Forecast period (2020-2027)

Infrastructure development activities are increasing rapidly across the globe, which has increased the demand for automation at construction sites, in order to enhance productivity and efficiency. As a result of this, sales of heavy-duty conveyor belts is increasing significantly. Therefore, these factors are expected to drive growth of the Middle East conveyor belts market during the forecast period. For instance, in February 2015, Qatar Railway Company installed 5-km conveyor belts placed 6.3m above the ground to move debris and rubble from construction sites at West Bay Central and West Bay South stations. Moreover, in October 2014, Qatar Primary Materials Company (QPMC) implemented a conveyor stacker system in order to increase the efficiency of port facilities.

Advancements in technology regarding materials of conveyor belts are expected to open up more application areas for conveyor belts. For instance, in January 2016, Yokohama Rubber Co. Ltd. introduced conveyor belts with improved, heat-resistant fabric. This new belt can be used in high-temperature environments such as in material handling of coke and sintered products, which can reach temperatures as high as 400°C. Therefore, these factors are expected to propel the market growth over the forecast period.

Turkey country held dominant position in the Middle East Conveyor belts market in 2019, accounting for 34.9% share in terms of value, followed by Kingdom of Saudi Arabia, U.A.E and Oman respectively. 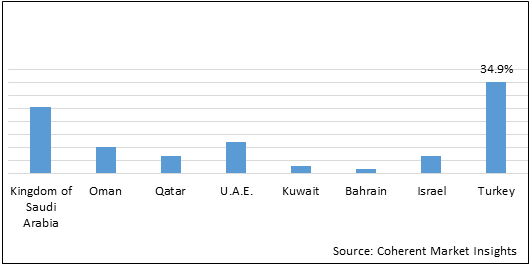 Major OEMs in the market face challenges associated with price and low-quality belt. This in turn is challenging premium quality manufacturers to market their products in standard price offerings. Investments made into upgrading technology by key players often fail to fetch commensurate returns from the market, causing the players to exit the market in a very short period of time. Hence, these factors are expected to restrain growth of the market during the forecast period.

Majority of conveyor belt manufacturers in Middle East and Africa rely on imports of procuring raw materials such as natural and vulcanized rubber and galvanized steel wires. There are a handful of conveyor belt manufacturers in the region, with most of them concentrated in a few clusters of GCC countries and Turkey. Raw materials such as natural rubber, galvanized steel wires, and fabric in the region are primarily imported from South Korea, China, and Russia, while carbon black is imported from the Philippines. Therefore, these factors are expected to hinder the market growth in the near future. 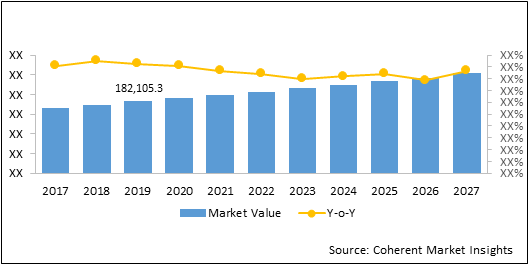 End-use industries are focused on reducing energy costs by use of efficient products and processes. Moreover, manufacturers are introducing energy-efficient conveyor belts for various applications. Major manufacturers are developing conveyor belts with better visco-elastic properties, which can reduce energy consumption by up to 20%. For instance, in 2014, Bridgestone Corporation developed energy-saving belts using its fuel-efficient Ecopia tire technology. This new conveyor belts material maximizes belt performance as the belt runs along the indentation resistant rollers.

Due to Covid-19 pandemic, many industries witnessed significant shift in their business. Logistics & supply chain industries are directly affected by COVID-19 pandemic.  The economic growth of the Middle East has slowdown due to disruptions in the supply chain across the country. For instance, in March 2020, Kingdom of Saudi Arabia (KSA) has suspended all the international flights. Additionally, FMCG and consumer goods companies are also affected by covid-19 and these companies are dependent on other countries for import/export of raw materials. Owing to these factors the demand for conveyor belts in declining, as these are highly used in the logistics sector.

Conveyor belts are used for carrying objects from one place to another. The material to be transported is placed on the belt and carried to the destination. Basically, these types of belts are used in transportation within the building. The two main application of these belts are in bulk handling and material handling. The material handling are those which are used to move boxes inside the factory and bulk handling are used to transport large volume of resources and agricultural material such as salt, coal, grain, sand etc. The thickness of the material need to be consistent for better performance of these conveyor belts.

Growing demand from power, manufacturing and mining industries are expected to drive market growth over the forecast period. This is attributed to high competition in the market as these industries are dependent on the efficient techniques to increase their productivity. The demand of these conveyor belts is also increasing due to growth of infrastructural activities and macroeconomics factors such as GDP growth. The growing demand for ecofriendly conveyor belts with properties such as self-cleaning is expected to improve the operation cost in industries. Which in turn, increases the demand of these conveyor belts in the market.

Which segment, based on weight, accounted for the highest demand in the market?

Which are the key factors driving the growth of the Middle East conveyor belts market?

Turkey country conveyor belt market is expected to generate the highest revenue during the forecast period.

Market Overview A thermoelectric module is a solid-s...