Thromboelastography is a technique for evaluating the effectiveness of blood coagulation. Although, it is increasingly being utilized in resuscitations in emergency rooms, critical care units, and labor and delivery rooms. The test is mostly used in anesthesia and surgery. Thromboelastography (TEG) is a non-invasive test that analyses whole blood's ability to clot quantitatively. The goal of this in vitro test is to identify and measure dynamic alterations in a blood sample's viscoelastic characteristics that occur during clotting under low shear stress. A Thromboelastography is a specially created system, which is used to conduct the test. The device uses two chambers to examine a blood sample in parallel while reducing the possibility of measurement and sampling errors. The body's defence against potentially fatal exsanguination is based on the blood's capacity to coagulate, or change from a liquid to a solid form. The thrombosis process typically only occurs locally at the site of arterial damage, leaving the remaining blood in circulation in a liquid state. 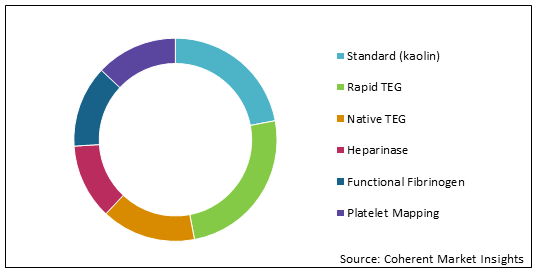 Increasing number of product launches by market players is expected to drive the global thromboelastography market growth over the forecast period. For instance, on April 28, 2022, Nordic Biomarker is a Sweden based manufacturer of advance reagent, calibrators and controls for coagulation and clinical chemistry analyzers launched vWF Antigen. “Von Willebrand factor”, which is a large protein that plays an important part in the coagulation process. Up to 1% of people have von Willebrand Disease (vWD), the most prevalent inherited bleeding illness. The diagnosis denotes either a lack of sufficient quantity or quality of vWF, which causes abnormal bleeding in the patient. A vWF Antigen assay is one of the several processes that make up the difficult diagnosing procedure.

The increase in number of research and development activities is expected to boost the growth of global thromboelastography market over the forecast period. For instance, on January 10, 2020, an article published in Multidisciplinary Digital Publishing Institute (MDPI), Viscoelastic tests results does not clearly split platelet count from function. Moreover, extensive thrombin generation from standard activated viscoelasticity assays activates platelets through protease-activated receptors, bypassing other pathways. For this reason, standard viscoelastic tests cannot be used to assess platelet reactivity under the action of aspirin or P2Y12 inhibitors. To overcome this problem a new technique was developed called as thromboelastography platelet mapping, it is a modification of the standard TEG and it evaluates platelet function through direct activation of arachidonic acid (AA) and adenosine diphosphate (ADP) receptors.

For instance on May 15, 2020, a press release by American College of Surgeons (ACS) stated that clotting is particularly severe in COVID-19 patients who develop disseminated intravascular coagulation (DIC), as evidenced by case studies in China and elsewhere. As noted, these patients’ blood clots do not appear to have resolved. To overcome the risk of severe and lethal clotting in COVID-19 patient’s thromboelastography was used.

On the basis of region, the global thromboelastography market is segmented into North America, Latin America, Europe, Asia Pacific, Middle East, and Africa.

Among regions, North America is expected to hold a dominant position in the market during the forecast period, owing to the increasing number of approvals by regulatory authorities is expected to drive the market growth over the forecast period. For instance, Idarucizumab, a monoclonal antibody specific for the dabigatran molecule, has now received the U.S. FDA approval for use as an antidote. Similar antibodies are being developed to ask the FDA for permission to reverse xabans (Xa) inhibitors like Andexanet Alpha. Since the thrombin time and the ecarin clotting time, which can quantify coagulation with the Non-Vitamin K antagonist oral anticoagulants (NOACs), are not widely available, it is likely that the Thromboelastography (TEG)/ Thromboelastometry (ROTEM) will be used to determine the efficacy of these antidotes. 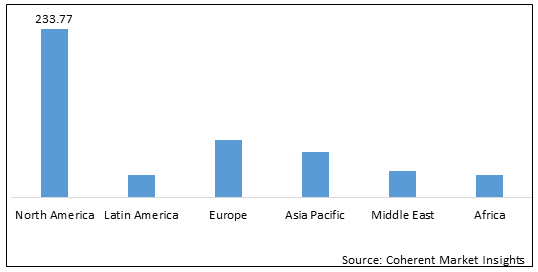 The thromboelastography protects against the severe blood loss or hemorrhage occurred during severe injury or during a surgery.  Thromboelastography (TEG) is more frequently used in cardiac surgery, organ transplants, and arteriovenous malformation surgeries where the anticipated blood loss is greater than 40% of the circulating blood volume because it performs an in vitro analysis of the relationship between platelets, enzymes, fibrinogen, and other coagulation elements in a comprehensive manner. Through platelet mapping, patients using antiaggregants like clopidogrel or aspirin can have their platelet activity assessed. This is made possible by include TEG in the pre-anesthetic assessment.

Increasing initiatives in developing new methods by market players is expected to boost the growth of global thromboelastography market over the forecast period. For instance, on February 20, 2022, an article published in national library of medicine, asserted that Coagulopathies pose additional diagnostic and therapeutic difficulties in the field of otolaryngology—head and neck surgery (ENT). Management of coagulopathies in both hyper- and hypocoagulable individuals necessitates careful consideration of the nature of hemostatic competence. Viscoelastic tests (VETs) such as thromboelastography (TEG) and rotational thromboelastometry (ROTEM) have long been methods of guiding blood component therapy (BCT). VETs have been widely adopted for the diagnosis and management of trauma-induced coagulopathy and bleeding conditions.

Increasing in the rate of new approvals by regulatory authorities such as the U.S. FDA is likely to boost the growth of global thromboelastography market over the forecast period. For instance, on January 11, 2021, Abbott Laboratories is a multinational company engaged in manufacturing and research of medical devices and health care products. Abbott received an FDA 510(k) clearance for the first rapid handheld blood test for concussion. The i-STAT Alinity handheld device from Abbott will be used to provide the test to help diagnose mild traumatic brain injury (TBI), also known as concussion. The test results are available 15 minutes after inserting a plasma sample.

What will be the compound annual growth rate (CAGR) for the market during the forecast period (2022-2030)?

What is the estimated market size of the market in 2022?

Which are the prominent players operating in the market?

What are the growth estimates for the market till 2030?

North America is the prominent region in the market.

Which is the prominent segment in type in the market?

Rapid TEG, which belongs to the Type segment, is the prominent segment in the market