The global Train HVAC market size was valued at USD 13,430.9 million in 2021 and is anticipated to witness a compound annual growth rate (CAGR) of 3.8% from 2022 to 2030.  The increase in investments in HVAC systems and the increase in demand for public transportation and the expansion of existing lines is expected to drive growth of the global train HVAC market during the forecast period. Considering the increased demand for comfort, the railway HVAC market is projected to grow. Furthermore, increased investments in railway infrastructure and development of rapid transit systems are expected to drive the market.

North America is expected to witness robust growth in the global train HVAC market over the forecast period. This is owing to availability of vast subway networks in the United States, helping commuters in their day-to-day travel, transportation of heavy cargo and products across the country through the rail network, and along with passenger travel, extensive use of railway travel for freight transportation. Thus, the demand for train HVAC is high in the region, which further drives growth of the global train HVAC market. 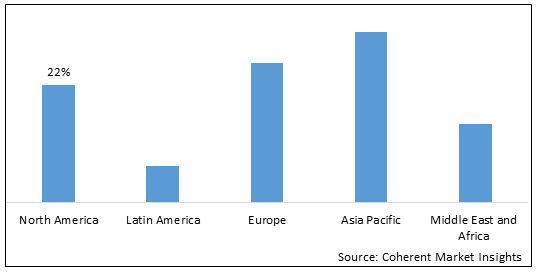 Rise in investments for expansion of rail networks is expected to augment growth of the global train HVAC market over the forecast period. Governments across the globe are increasingly investing in expansion of railway networks for catering the growing demand due to rise in population around the world, and increase in demand for safe, faster, and comfortable transport. For instance, in June 2020, 24 countries across the Europe entered into an agreement of working together on international rail transport and making it an ‘attractive alternative’ in distances it is not competitive at the moment. Thus, this factor will boost the market growth in the forecast future.

Growing rail industry around the world is expected to provide various growth opportunities in the global train HVAC market over the forecast period. The railway industry is an important part of any industrial economy, which makes the logistics chains essential to any country. Most of the emerging countries import rail components from the production site of locomotive or rail manufacturer, which further increases cost of the components. This leads to domestic manufacturing in emerging countries such as South Africa, Brazil, and India. Thus, the growth of rail industry in such countries around the world is creating growth opportunities for the global train HVAC market.

Rise in initiatives by governments towards investment and manufacturing of rail components is also expected to offer growth opportunities in the global train HVAC market during the forecast period. For instance, the government of India started a ‘Make in India’ initiatives, which led to investment by multinational companies in the country, which further generated significant opportunities for business collaboration between global and domestic players. Moreover, several governments are boosting their spending in building high-speed rail networks, which is also generating growth opportunities in the market.

Rise in demand for rapid transit is a growing trend in the global train HVAC market. The demand for transportation is growing around the world, due to which many governments are focusing on expansion of rapid transit networks within the countries. This will increase the feasibility of public transportation for the populations. Moreover, most of the countries around the world are heavily investing in development of urban rail transit, in which they are focusing more on high-speed trains for passenger travel. This trend is projected to continue in the market during the forecast period.

Growing need for new HVAC and rail infrastructure in Europe is expected to augment growth of the global train HVAC market over the forecast period. In Europe, Germany has one the world’s largest rail systems. The country has several towns and cities with multiple train stations, which reflects train travel’s popularity. Moreover, in England the future transportation networks will heavily depend upon more of light rail and other fast options of transit. Moreover, the country also has metro system, which further increases the demand for rail infrastructure and HVAC. Thus, this trend will continue in the global train HVAC market during the forecast period.

High cost of maintenance and low lifespan of train HVAC equipment is also expected to hamper growth of the global train HVAC market over the forecast period. HVAC systems can regulate every function related to moisture and temperature regulations in trains as well as in other end-use applications such as chemicals, automobiles and others. These systems require to run continually in every type of environmental conditions of moisture, pressure, and temperature. Thus, this further leads to poor lifespan and high cost of maintenance of these HVAC systems. These factors are expected to impede growth of the market. 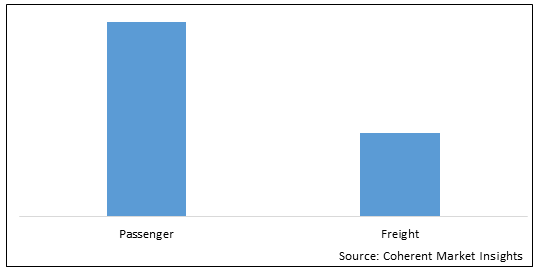 Based on Train Type, the market is segmented into Passenger Train, Freight Train. Out of which, Passenger Train is expected to dominate the global market over the forecast period and this is attributed to the increasing growth of passenger train travel around the world leading to high demand for train HVAC. Currently, railway is considered as one of the most energy-efficient mode of transportation, which accounts for 8% of global motorized passenger movements, and 7% of freight; however, consumes only 2% of energy. Thus, the segment is likely to witness strong growth and high demand for train HVAC.

Freight Train segment is also expected to witness significant growth in the near future and this is owing to the increasing government initiatives to boost efficiency of rail network. For instance, European Commission, in recent years adopted various measures designed for increasing railway network efficiency. By 2050, 50% of the freight transportation by road will be shifted to train freight transportation. Thus, such initiatives are driving growth of the segment.

Based on System, the market is segmented into Vapor Cycle Systems, Air Cycle Systems. Out of which, Vapor Cycle Systems is expected to dominate the global market over the forecast period and this is attributed to the various benefits offered by this system leading to high adoption of vapor cycle systems. Most of the train HVAC systems consist vapor cycle systems, as these are used for high-speed to light rail vehicles. Moreover, increasing development and high efficiency of novel advanced non-polluting working gases, are likely to drive growth of the segment in the forecast future.

Air Cycle Systems segment is also expected to witness significant growth in the near future and this is owing to the rise in efforts by government around the world for reducing greenhouse gas emission leading to high demand for air cycle systems. This technology is derived from aerospace applications and has various benefits that results in high demand for air cycle systems.

Natural Refrigerants (CO2) segment is also expected to witness significant growth in the near future and this is owing to the various advantages of natural refrigerants. Owing to the high energy density and thermodynamic properties of CO2, solutions with highly compact designs can be made with CO2 air-conditioning technologies.

Based on Component Type, the market is segmented into Air Dampers, Blowers, Compressors, Condensers, Transformers, Inverters, Evaporators, and Other Component Types. Out of which, Air Dampers is expected to dominate the global market over the forecast period and this is attributed to the growing demand for air dampers. Air dampers offer various advantages. When trains operate with commuters, the air present inside the coaches get pulled constantly by the HVAC, and after that the air is cooled, filtered, and then released back. The outside is also released into the coaches at the same time after it passes through the same filtration and cooling units. Apart from this, the air dampers have other lucrative features, which further increases demand for these systems.

Blowers segment is also expected to witness significant growth in the near future and this is owing to the rise in number of novel blower technology. Despite their sizes compared to other components, blowers play an important role in circulating the air in HVAC unit. In the coming few years, various novel blowers technology is likely to be introduced in the market, which will drive growth of the segment in the forecast future.

In October 2019, Toshiba International Corporation announced that the company will supply 68 units of electric locomotives to the Taiwan Railways Administration under JPY 40 billion contract, which also includes locomotive air conditioners and spart parts.

The global Train HVAC market is highly competitive. This is attributed to continuous launch of new technologies due to ongoing R &D and efforts by value chain participants. Moreover, key players are adopting various business growth strategies in order to expand their presence on regional as well as global basis.

Railway HVAC units are used to regulate the temperature of passenger trains and locomotives. Air conditioning is also used to prevent the buildup of moisture on board. This helps in keeping the surroundings dry and prevents the spread of bacteria and viruses.

The HVAC system ensures a healthy indoor environment, and it also protects furniture and other appliances. It also prevents the release of pollutants. Several different types of HVAC systems exist, from the conventional to the ductless. The most basic systems work by moving air through a network of ducts. Some of these systems are small enough to fit into an average sized closet.

A train's HVAC system is responsible for keeping the passengers warm and comfortable, however, it's also required to run continuously in a harsh environment. This requires regular maintenance. HVAC technicians are responsible for inspecting and maintaining the system to make sure it's operating at peak efficiency. They also work in confined spaces and are responsible for lifting and moving heavy equipment.

However, lack of skilled labor and high cost of installation and maintenance of the HVAC systems are the factors expected to hinder growth of the global train HVAC market over the forecast period. Moreover, low awareness regarding benefits of HVAC systems in railways is also impeding growth of the market.

Rise in investments for expansion of rail networks and growing demand for air conditioning system from railways are fuelling the market.

Which is the leading train type segment in the market?

The Freight segment is the leading component segment in the market.

Lack of skilled workforce and high cost of maintenance and low lifespan of train HVAC equipment are the major factors restraining the market.