Zinc Paste Bandage is an open woven bandage that is infused with zinc oxide, which is commonly used for treatment of venous leg ulcers and varicose eczema. This medicated bandage contains zinc oxide and glycerol, provides a moist wound healing environment, helps to reduce skin irritation, and soothes and protect surrounding skin. Econo-Paste is zinc paste bandage of Hartmann is used for the management of leg ulcers. Increasing the prevalence leg ulcers which drive the zinc paste bandage market growth during the forecast period. 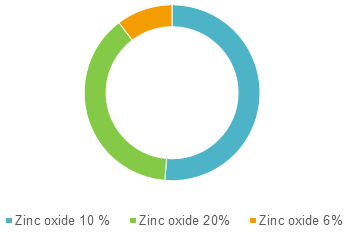 Increasing prevalence of venous leg ulcers is expected to drive the zinc paste bandage market growth during the forecast period. For instance, according to National Institute for Biotechnology Information, 2016, leg ulcers usually occur secondary to venous reflux or obstruction, but 20% of people with leg ulcers have arterial disease, with or without venous disorders. Between 1.5 and 3.0 in 1000 people have active leg ulcers and, its prevalence increases with age to about 20 in 1000 people over 80 years of age in the U.S.

According to DermNet New Zealand, 2016 report, venous eczema is a common form of venous/dermatitis that affects one or both lower legs in association with venous inefficiency. Venous eczema is commonly seen in middle-aged and elderly patients, and it reported that it affects 20% of people over 70 years of age.

Growth of the zinc paste bandage market is expected to be hampered over the forecast period, owing to increasing FDA recalls. For instance in August 2018, (USFDA) food and drug administration recalled the Boot Compression Wrap under Class 2 Device Recall developed by Medline Industries Inc., due to sporadic reports of discoloration of the products, which leads to identification of common mold in the boot compression

On the basis of region, the zinc paste bandage market is segmented into North America, Latin America, Europe, Asia Pacific, Middle East, and Africa. North America is expected to hold a dominant position in the zinc paste bandage during the forecast period owing to presence of key industry players in the region (including Hartmann USA., Smith & Nephew). Moreover, key players in the North America market are focused on development and product launches in order to expand their market position. For instance, Hartmann USA launched the Econo-Paste zinc oxide paste bandage for wound site healing, and it helps ease skin irritation and maintains moist healing.

Europe is expected to foresee rapid growth in the zinc paste bandage market during the forecast period, owing to increasing prevalence of sports related injuries. For instance, according to European Injury Data Base (IDB) 2016, annually about 4.5 million people aged 15 years and older in the EU are treated for sport injury.

Rising prevalence of chronic wounds, as well as increasing geriatric population is expected to boost the zinc paste bandage market growth. According to the US National Institute of Health, 2017, an estimated 6.5 million people were affected by chronic wound in the U.S. Moreover, according to the Population Reference Bureau, in 2016, 46 million in the U.S. were aged 65 and above.

A cochlear implant is a small and complex electronic device which helps patients who are deaf or hard-of-hearing get a...

Orthotic devices are externally applied devices, which are used for supporting, mobilizing, and modifying structure of...