Alcohol Breathalyzer and Drug Testing Equipment Market to Surpass US$ 8,506.5 Mn by 2030

The global alcohol breathalyzer and drug testing equipment market is estimated to be valued at US$ 5,215.4 million in 2022 and is expected to exhibit a CAGR of 6.3% during the forecast period (2022-2030).

Increasing number of drunk and drive cases and drug addiction are expected to be major factors for increasing demand of alcohol breathalyzer and drug testing equipment, which is expected to drive the market growth over the forecast period

The increasing number of drunk and drive cases and drug addiction are expected to be major factors for increasing demand of alcohol breathalyzer and drug testing equipment. For instance, according to 2018 Fatal Motor Vehicle Crashes: Overview by the National Highway Traffic Safety Administration, a U.S. federal agency, 10,511 deaths were registered in the U.S. in 2018 due to drink and drive accidents. Moreover, according to the 2019 National Survey on Drug Use and Health (NSDUH), 85.6 percent of people ages 18 and older reported that they drank alcohol at some point in their lifetime, 69.5 percent reported that they drank in the 2021 year, and 54.9 percent (59.1 percent of men in this age group and 51.0 percent of women in this age group) reported that they drank. 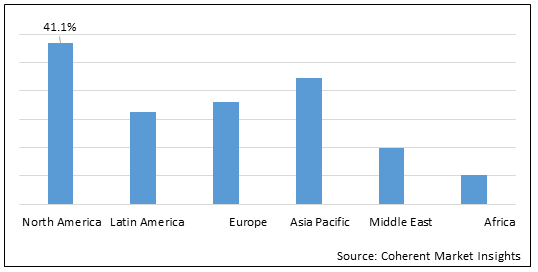 Stringent government regulations and laws to reduce incidence of driving under influence of drugs and alcohol are also expected to propel growth of the market.

Stringent government regulations and laws to reduce incidences of driving under influence of drugs and alcohol are also expected to propel growth of the market. For instance, the state government of New Jersey imposed new drunken-driving laws from December 1, 2019 that eliminates license suspensions for most first offenders, while requiring all motorists convicted of driving under the influence to install ignition interlocks, the in-car breathalyzers that immobilize a vehicle if the driver's breath registers too much alcohol.

COVID-19 can affect the economy in three main ways: by directly affecting production and demand of drugs, by creating disruptions in distribution channels, and through its financial impact on firms and financial markets. Due to nationwide lockdowns, several countries, such as China, India, Saudi Arabia, U.A.E., Egypt, and others, are facing problems with regards to the transportation of drugs from one place to another.

However, the COVID-19 pandemic had a negative impact on the global alcohol breathalyzer and drug testing equipment market, owing to decrease in the drug testing activity. For instance, in October 2021, according to the data published by the National Center for Biotechnology Information, Lab-based urine testing, the gold standard for drug testing, remains the dominant drug testing method, but it notably slipped a few percentage points from 89 percent in 2020 to 85 percent in 2021. Meanwhile, employer use of less intrusive testing methods—lab-based oral fluid, hair testing, instant urine, and instant oral fluid testing—increased. Moreover, due to pandemic-related logistics and health concerns, it is harder to get traditional testing done, and many collection sites have also been performing COVID-19 testing. In response, employers compensated by moving to other testing options. Most employers, around 98 percent, perform some form of drug screening on their employees.

In July 2022, Cannabix Technologies Inc., a Vancouver-based technology company and developer of marijuana breathalyzer devices for law enforcement and the workplace reports that the company is participating in a new comprehensive multi-analysis study of subjects under the influence of marijuana. The new study will work alongside toxicologists and law enforcement officers in the southern U.S. In late June 2022, the Cannabix Technologies Inc., company participated in the first of three testing sessions that are expected to be held over the summer. The company has been coordinating for several months on its participation in this study with senior administrators. The study will test subjects under the influence of marijuana alongside several conventional drug screening methods (blood, oral fluid etc.), in conjunction with the use of Cannabix’s proprietary breath capture and marijuana detection equipment. Cannabix had granted use of its Breath Collection Unit and newly developed laboratory ‘MS Breath Sampler’ equipment to this important new research study focused on the detection of marijuana impairment in human subjects.

A breath analyzer is also known as a ‘Breathalyzer’. It is a portable device used by the regulatory authorities across the world to identify if suspect has consumed alcohol above the permitted limits. In emerging and developed countries such as U.S., India, China, government are taking initiatives and enforcing safety laws related work safety issues. According to the Centers for Diseases and Prevention reports published in 2016, excessive alcohol use leads to around 88,000 death in the U.S. each year. Many organizations are now installing breathalyzer in their premises to keep a check on loss of work place productivity due to excessive drinking. Drug testing involves checking for substance use in people who do not necessarily have any symptoms of intoxication or a substance-related disorder. It may be done systematically or randomly in certain groups of people such as students, athletes, and prisoners. A drug test looks for signs of one or more illegal or prescription drugs in a sample of urine (pee), blood, saliva (spit), hair, or sweat. The purpose of a drug test is to look for drug use and misuse, which includes:

A drug test can check for a single drug or for a group of drugs in your body. Drug tests commonly test for:

The rise in government programs and initiatives to control the accidents due to drink and drive situation is expected to drive the global alcohol breathalyzer and drug testing equipment. For instance, in August 2021, The Driver Alcohol Detection System for Safety (DADSS) Program started researching a first-of-its-kind technology that holds the greatest potential had to reverse testing of alcohol drink and drive trend. The technology will automatically detect when a driver is intoxicated with a blood alcohol concentration (BAC) at or above 0.08% — the legal limit in all 50 states except Utah — and prevent the car from moving. Once it has met rigorous performance standards, it will be voluntarily offered as a safety option in new vehicles — like automatic braking, lane departure warning and other advanced driver assist vehicle technologies.

What is the current market size and compound annual growth rate (CAGR) of the global alcohol breathalyzer and drug testing equipment market during the forecast period (2022-2030)?

Factors such as increasing number of drunk and drive cases, drug addiction, and stringent government regulations and laws to reduce incidences of driving under influence of drugs and alcohol are expected to drive the market growth.

Which is the leading end user segment in the market?

Hospitals is the leading end user segment in the market.

The major factors hampering growth of the market include inaccurate and wrong results provided by some breathalyzers and the low cost of alcohol breathalyzer and drug testing equipment manufactured by local players in the unorganized sector.