Ammonia (NH3) is a compound composed of one nitrogen and three hydrogen atoms. It is usually found as a gas. It is colorless, highly soluble in water, and has a pungent odor. Ammonia is essential for many biological processes and serves as a precursor for amino acid and nucleotide synthesis. Ammonia is produced naturally through the breakdown of organic waste matter in the environment. It is used in fertilizer, chemical, pharmaceutical, pulp and paper, mining, fiber, and plastics industries. The feedstock used for ammonia production are natural gas and fuel oil.

Increasing demand for fertilizers in the agriculture sector is the major driving factor for the growth of global ammonia market across owing to increasing production capacity of ammonia across the globe this factor driving the market. For instance, according to the International Fertilizer Industry Association (IFA), ammonium production on the basis of region North America and South Asia accounted for 70% of overall capacity growth in forecast period (2017-2021).

However, ammonia is irritating and corrosive. Thus, exposure to high concentrations of ammonia in air causes burning of nose, throat, and respiratory tract, which is one of the major factors restraining the ammonia market growth.

The global ammonia market was valued at US$ 48.99 billion in 2017 and is expected to expand at a CAGR of 5.4% in terms of revenue during 2018–2025, owing to rising ammonia production capacity across the globe. According to the International Fertilizer Industry Association (IFA), global ammonia capacity is projected to expand by 8% over 2016, to reach 234 Mt NH3 in 2021. Increase in capacity is expected in EECA, North America, and Africa by 2021. 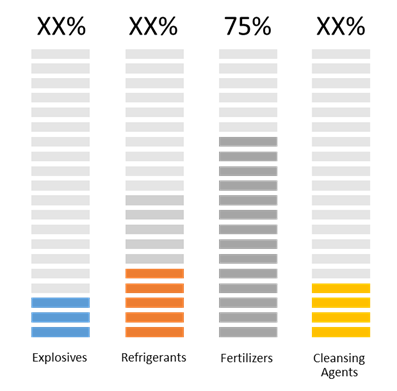 Among application, fertilizer segment is the largest in the global ammonia market share of 75% in 2017 and it is expected to grow during forecast period due to high demand for ammonia in fertilizer industry. According to the Government of India (GOI), globally, 80% of all ammonia manufactured is used in the production of nitrogenous fertilizers, and urea is the main nitrogenous fertilizer manufactured in India. When applied to soil, it helps in providing increased yields of crops such as corn and wheat. Consuming over 1% of all man-made power, the production of ammonia is a significant component of the world energy budget. 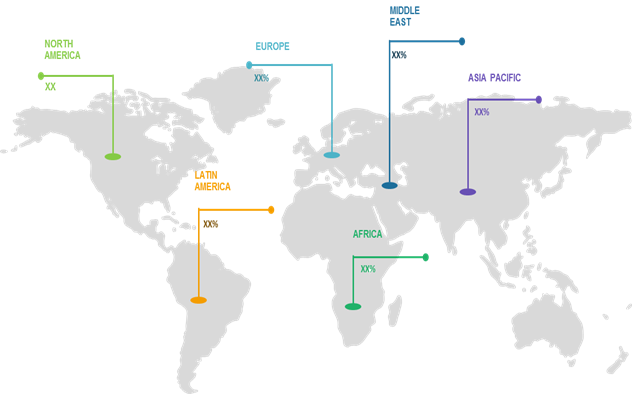 Asia Pacific is expected to account for significant market share in the global ammonia market in terms of revenue over the forecast period. Ammonia is used in cleansing agents and as food additives. Ammonia is used as leavening agents in baked goods and as an acidity controller in cheese and chocolate. According to Coherent Market Insights’ analysis, the global chocolate market was valued at US$ 99.60 billion in 2016 and is expected to grow at a CAGR of 6.6% over the forecast period, which in turn will drive growth of ammonia market.

Europe held significant market share in the global ammonia market in 2017 and is expected to retain its dominance over the forecast period owing to benefits of the ammonia such as acid regulators, stabilizers. According to World Health Organization (WHO), the estimated daily ammonia intake through food and drinking water is 18 mg, by inhalation is less than 1 mg, and through cigarette smoking (20 cigarettes per day) is less than 1 mg. In contrast, 4000 mg of ammonia per day are produced endogenously in the human intestine.

Ammonia (NH3) is a colorless gas, which is highly soluble in water, corrosive, and has a pungent odor. At normal atmospheric pressure, ammonia has a boiling point of -28 EF and a freezing point of -107.86 EF. Ammonia is used in the production of nitrogen fertilizers. Ammonia is used in end-used industries such as agriculture, chemical, textile, pulp and paper, pharmaceutical and water treatment.

Increasing demand for ammonia in end-use industries such as water treatment, textile, plastic, and chemical is driving growth of the global ammonia market. Ammonia is also used as a refrigerant gas for the purification of water supplies. As ammonia is used in the manufacturing of synthetic textile fibers such as nylon, rayon, and acrylics thus its demand in textile industry has positively impact on the global ammonia market. For instance, according to the India Brand Equity Foundation (IBEF), Indian textile market has increased from US$ 99 Billion in 2014 to US$137 Billion in 2016 and exhibited a CAGR of 17.6% during the period 2014-2016.

However, the higher concentrations of ammonia in the air causes severe injuries and burns are the factors which restraint growth of ammonia market. Contact with concentrated ammonia solutions such as industrial cleaners can cause corrosive injuries including skin burns, blindness or permanent eye damage.

Asia Pacific held significant market share in the global ammonia market due to high production and consumption of ammonia as a fertilizer in agriculture industry of emerging economies such as China and India. For instance, according to the Department of Agriculture, Forestry and Fisheries, China fertilizer production was valued at 84 million tons in 2014.