HIV diagnostics plays a major role in HIV prevention, treatment, care, and other support services. The diagnosis of HIV includes testing services in health-care facilities, free-standing sites, and a wide range of community-based approaches along with HIV self-testing. Developments such as home testing represent new and major opportunities for addressing HIV among men who have sex with men (MSM). According to the UNAIDS, the Joint United Nations Program on HIV and AIDS, 2018 data, Asia Pacific recorded around 5.2 million people living with HIV in 2022. 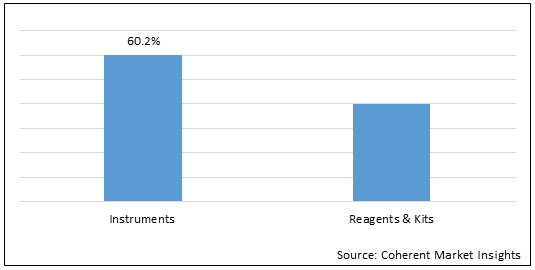 Governments of various countries in Asia Pacific are taking initiatives to create awareness regarding HIV among people due to high prevalence of HIV/AIDS in the region. This in turn is increasing adoption of HIV diagnostic instruments and test kits. Low literacy rate coupled with unawareness regarding transmission mode on HIV, changing lifestyle, and unsafe sex are some of the factors leading to increasing number of HIV cases. In order to lower the disease incidence and increase life expectancy of infected patients, governments of various countries along with NGOs are focusing on improving HIV diagnostics and making them easily accessible to the general population.

Moreover, in January 2022, Asian Development Bank (ADB) provided a strategic link between Myanmar’s government and the non-governmental organizations (NGOs) currently providing HIV/AIDS prevention and treatment services in order to strengthen the provision of healthcare in remote, vulnerable, and hard-to-reach populations. 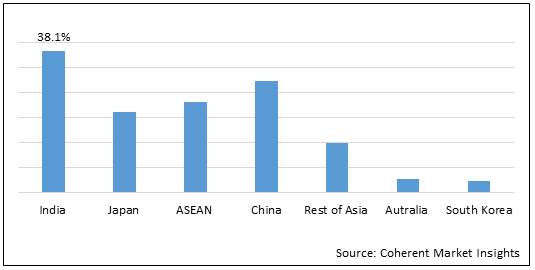 Introduction of the new diagnostic techniques to test HIV is expected to drive the Asia Pacific HIV diagnostics market over the forecast period. For instance, in July 2018, according to the data published by the World Health Organization, the introduction of the in-vitro diagnostics (IVDs) tests has helped to diagnose patients effectively and work to provide appropriate treatments. In November 2018, in vitro diagnostic testing was published in the World Health Organization List (First WHO Model List of Essential In Vitro Diagnostics) for diagnosis of the HIV. These In Vitro (IVD) are grouped by discipline (e.g. clinical chemistry, serology, haematology, microbiology and mycology) and test type (e.g. bilirubin, complete blood count). In Vitro Diagnostics for the detection, diagnosis and monitoring of the WHO priority diseases: HIV infection, tuberculosis (TB), malaria, hepatitis B, hepatitis C, human papillomavirus (HPV) infection and syphilis. These IVDs are grouped by disease area and analyte tested.

COVID-19 can affect the economy in three main ways: by directly affecting production and demand of drugs, medical devices, diagnostic testing by creating disruptions in distribution channels, and through its financial impact on firms and financial markets. Due to nationwide lockdowns, several countries, such as China, India, Saudi Arabia, U.A.E., Egypt, and others, are facing problems with regards to the transportation of drugs from one place to another.

However, the COVID-19 pandemic had a negative impact on the Asia Pacific HIV diagnostics market, owing to the increased stress for testing COVID 19 Samples there was slight decrease in the diagnostics testing on HIV. For instance, according to the data published by the National Center for Biotechnology Information, due to the COVID-19 pandemic, significant disruptions in medical services occurred worldwide. In clinical experience, one change was reduced outpatient HIV testing. The research carried out by the PubMed (the MEDLINE database) search revealed reports documenting reduced HIV testing in Australia, Belgium, China, Japan, and multiple regions of Kenya, Uganda, and numerous other European countries. The COVID-19 pandemic period between January and August 2020 impacted significantly on HIV testing, the percentage of positive tests, the number of consultations and the number of new enrolments in care, despite the implementation of several mitigation strategies.

The major factors that hinder growth of the Asia Pacific HIV diagnostics market include inadequacy of competent healthcare personnel, unreliability of test results, and poor staff attitudes are the factors which stop patients from HIV screening. For instance, in June 2017, Health Sciences Authority (HSA), Singapore; recalled 9 lots of HIV screening test kits, after it was found that the kits could result in false negative results for some people in the early stages of HIV infection. Furthermore, lack of awareness regarding testing procedures, inaccessibility to testing sites, inconvenient testing hours, and cost of testing are also negatively impacting Asia Pacific HIV diagnostics market growth. Several variants of the virus are found worldwide and some variants tend to be more prevalent in certain geographies than others. Testing kits, when not designed to accommodate this variation, can provide incorrect results.

HIV causes AIDS and interferes with the body's ability to fight infections. The virus can be transmitted through contact with infected blood, semen or vaginal fluids. Within a few weeks of HIV infection, flu-like symptoms such as fever, sore throat and fatigue can occur. Then the disease is usually asymptomatic until it progresses to AIDS. AIDS symptoms include weight loss, fever or night sweats, fatigue and recurrent infections. HIV (human immunodeficiency virus) is a virus that attacks cells that help the body fight infection, making a person more vulnerable to other infections and diseases. HIV can be diagnosed through blood or saliva testing. Available tests include: Antigen/antibody tests. These tests usually involve drawing blood from a vein. Antigens are substances on the HIV virus itself and are usually detectable — a positive test — in the blood within a few weeks after exposure to HIV. According to the Center for Disease Control and Prevention, three types of HIV tests are available:

The time between potential HIV exposure and an accurate test result is referred to as the window period. Improvements in testing technology continue to reduce the detection window period, and, therefore, the time to diagnosis and treatment of early HIV infection.

Increasing engagement programs by various government bodies to reduce disease burden of HIV epidemics and growing need for safe blood transfusion and donations in Asia Pacific is expected to drive the HIV diagnostic market size during the forecast period. For instance, in January 2018, India plans to make pre-exposure prophylaxis (PrEP) available to men who have sex with men (MSM) and transgender women. The Indian Council of Medical Research (ICMR) indicated in November 2018 that it is planning to study the effectiveness of PrEP in high-risk groups.

However, stigma and social ostracism associated with HIV infections and diseases is expected to hinder the timely HIV diagnostics and treatment. Moreover, the fear of being tested positive, discrimination, rejection, and stigma restricts several people from conducting screening voluntarily. The fear of discord in marital relationships is yet another challenge where testing HIV positive is often seen as a case of infidelity. Therefore, these factors are expected to hamper the market growth.

What is the current market size and compound annual growth rate (CAGR) of the Asia Pacific HIV diagnostics market during the forecast period (2022-2030)?

Factors such as increasing government initiatives to reduce HIV/AIDS burden and introduction of the new diagnostic techniques to test HIV are expected to drive the market growth.

Which is the leading region segment in the market?

India is the leading region segment in the market.

The major factors hampering growth of the market include inadequacy of competent healthcare personnel, unreliability of test results, and poor staff attitudes