Among regions, North America is expected to gain highest share in the market over the forecast period owing to the increasing incidence of atopic dermatitis, increasing awareness among people about atopic dermatitis, and government campaigns to raise awareness in the region. For instance, atopic dermatitis (eczema) is the condition that causes dry, itchy, and inflamed skin. According to the Asthma and Allergy Foundation of America, the most common form of eczema, AD (atopic dermatitis) leads to significant emotional burden in addition to pain, physical discomfort, and sleep disturbance for 16.5 million adults in the United States. 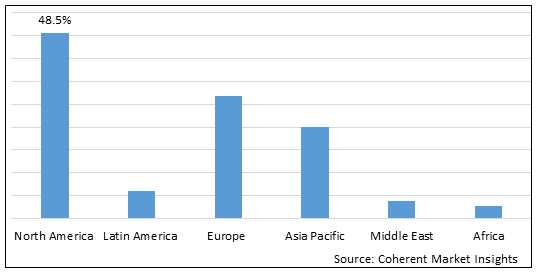 Growing prevalence of atopic dermatitis to augment the market growth

One of the key factors expected to augment the growth of the global atopic dermatitis market over the forecast period is the rise in prevalence of atopic dermatitis across the globe. Atopic dermatitis, also known as eczema, is a chronic disease that causes inflammation, redness, and irritation of the skin. It is a common condition that usually begins in childhood; however, people of all ages live with a condition. According to the World Health Organization (WHO) Global Burden of Diseases initiative, more than 230 million people across the world have atopic eczema, and this number is expected to increase during the forecast period.

Another factor which is driving the growth of the global atopic dermatitis market is the increasing awareness among people about atopic dermatitis. Atopic eczema is one of the most prevalent skin diseases in the world. Thus, governments worldwide and players in the market are launching novel initiative/campaign to raise atopic dermatitis awareness. For instance, Atopic Eczema Community comes together on September 14th (every year) to raise awareness for the disease, speak up about the burden it has on patients and caregivers, and to recognize the need for care and treatment that is reflective of the multi-dimensional nature of the disease.

Outbreak of COVID-19 across the world is expected to offer significant growth opportunities for players in the global atopic dermatitis market. For instance, the global pandemic has had a positive impact on the growth of the market due to increase in frequency of hand-washing by the population following safety and sanitation/hygiene measures, which helps in containing the spread of SARS-CoV-2 (COVID-19). Constant exposure to soap and water has increased dry skin, leading to an increase in cases of hand atopic dermatitis, driving the market growth.

Increase in demand for safe/effective treatment is a recent trend

With the rise in prevalence of atopic dermatitis, the demand for safe and effective AD treatment. As a result, players in the market are focusing on developing and launching novel therapeutics in the market. Left untreated, eczema can lead to severe symptoms and increased risk of developing secondary infections. In severe long-term cases, untreated childhood eczema may interfere with growth and development.

Increase in use of atopic dermatitis drugs is another trend

Side effects of therapeutic drugs are hindering the market growth

One of the major factors hindering the market growth is the serious adverse effects associated with certain therapeutic drugs. Individuals with atopic dermatitis are at risk of developing food allergies, asthma, hay fever, itchy/scaly skin, skin infections, mental health conditions, sleep problems, and patches of skin that's darker or lighter than the surrounding area. However, developing a basic skin care routine (use a gentle/non-soap cleanser, daily bath or shower, and skin moisturize) may help prevent eczema flares as the triggers for AD vary widely from person to person.

High cost of treatment to hamper the growth of the market

Treatment cost variations (which limits patient access) is another major factor which is hampering the market growth. Atopic dermatitis is often associated with increased physician visits, emergency department visits, and hospitalizations. The cost of care is even higher with rising chronic physical illness and severely ill-patients. Moreover, in some emerging markets, AD causes a considerable consumption of financial resources as the treatment is often self-funded. 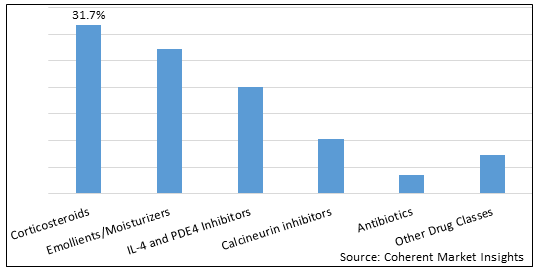 Emollients/Moisturizers Segment is also expected to witness significant growth in the near future and this is owing to the increase in awareness among people about atopic dermatitis.

Based on Type of Administration, the market is segmented into Topical, Oral, and Injectable. Out of which, Topical Segment is expected to dominate the market over the forecast period and this is attributed to the increase in adoption of topical AD treatments. Topical application remains the primary method for the atopic dermatitis management.

Oral Segment is also expected to witness significant growth in the near future and this is owing to the rise in cases of atopic dermatitis. For severe cases, doctors may prescribe oral corticosteroids, such as prednisone, for the atopic dermatitis management.

In August 2022, Chugai Pharmaceutical Co., Ltd. announced that Maruho Co., Ltd. announced the launch of anti-IL-31 receptor A humanized monoclonal antibody Mitchga Subcutaneous Injection for the treatment of itching associated with atopic dermatitis. Mitchga is approved by the Ministry of Health, Labour and Welfare (MHLW) on March 28, 2022.

In May 2020, the U.S. FDA approved Dupixent (dupilumab) for children aged six to 11 years with moderate-to-severe atopic dermatitis (AD) whose disease is not adequately controlled with topical prescription therapies or when those therapies are not advisable.

*Definition: Atopic dermatitis (AD), or eczema, is a chronic condition that causes dry, itchy, and inflamed skin. Atopic dermatitis is long lasting (chronic) and tends to flare sometimes. It’s common in young children but can occur at any age.

For instance, in February 2022, Evelo Biosciences reported that the first patient has been dosed in EDP1815-207, its Phase 2 randomized clinical trial of EDP1815 for the treatment of patients with mild, moderate, and severe atopic dermatitis.

Moreover, in October 2022, LEO Pharma A/S, launched AD Days Around the World, a global disease awareness campaign that highlights the experiences of people living with atopic dermatitis (AD); the most common form of atopic dermatitis.

Increasing prevalence of atopic dermatitis and increasing awareness among people is fueling the market.

The Corticosteroids segment is the leading drug class segment in the market.