The global automotive sunroof market size was valued at USD 9,361.1 million in 2021 and is anticipated to witness a compound annual growth rate (CAGR) of 10.0% from 2022 to 2030.  Automotive sunroof market is expected to grow in many regions. Several factors such as technological advancements in manufacturing processes are expected to drive this market in the years to come. Many manufacturers are focusing on innovation and product development to stay competitive. Rising sales of passenger cars and the presence of premium vehicle manufacturers in the region will help boost the demand for automotive sunroofs.

Moreover, Asia Pacific is also projected to dominate the global automotive sunroof market during the forecast period, owing to high demand for premium vehicles in developing countries such as India and China, as the disposable income in these countries is exhibiting a rise. Moreover, the growing automobile production in Asia Pacific is leading to heavy investment by automakers for expansion of production capacity. This in turn is expected to drive growth of the market across the region. 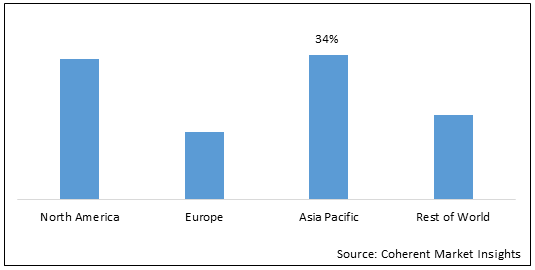 Growing inclination towards sunroofs among consumers in Asia-Pacific region is expected to augment growth of the global automotive sunroof market over the forecast period. Most of the countries in this region consider sunroof as a latent feature. However, now sunroofs are being considered as a standard feature in the automotive industry of the Asia-Pacific region and most of the premium and luxury cars manufactured here come with sunroof feature. Due to presence of large population pool, higher spending rates on luxury cars and high rate of white-collar public in the region is supporting the growth of global automotive sunroof market.

Furthermore, the number of automakers offering automobile sunroofs as an optional feature in most of the passenger cars is increasing and this growing trend is projected to fuel growth of the global automotive sunroof market over the forecast period. For instance, in June 2021, Webasto started supply of the elegant sliding panorama sunroof for the new Mercedes-Benz S-Class. This module of two roof enables the driver as well as passenger in the rear of the vehicle to control the settings independently and individually as per the need.

Growing penetration of solar sunroofs in EVs as well as rise in vehicle sales around the world is projected to provide market players with ample growth opportunities in the global automotive sunroof market over the forecast period. Several manufacturers are focusing on sustainability in automotive industry. With solar sunroofs, electric vehicles can use the energy harnessed from the sunroof to power some of the features in the vehicle. For instance, in January 2022, Mercedes-Benz revealed its Vision EQXX, the new electric car that comes with thin crystalline solar cells on the roof, which generates energy that powers the lights, a climate blower, the infotainment system and other features of the car.

Increasing technological development in sunroofs for electric vehicles is also likely to create growth opportunities in the global automotive sunroof market over the forecast period. As the world is shifting towards electric transportation, automobile and component manufacturers including sunroof manufacturers are increasingly focusing on research and development activities to develop products that boost the range of hybrid and electric vehicles. Thus, this factor is expected to support growth of the global automotive sunroof market in the near future.

Increasing R&D activities and investment by market players in automotive sunroof technologies is a growing trend in the global automotive sunroof market. Key players such as Inteva Products, Webasto Group and others are aggressively investing in R&D of sunroof technology. For instance, recently, the Webasto Group announced the development of a sunroof glass made from polycarbonate. This glass has more toughness, efficiency and impact-resistance. Moreover, manufacturers are focusing on investment for improving the technology of ambient lighting, switchable glazing as well as solar panels in sunroofs. This trend is expected to continue in the market over the forecast period.

The pop-up sunroof segment is gaining traction in the global automotive sunroof market. This system is one of the oldest and consists a basic structure with a removable glass panel and a vent in the rear. Pop-up sunroofs are highly adopted, as they require low maintenance and can be easily cleaned externally. The powder-coating or electro-static paint give these sunroofs the smooth surface. Thus, increasing adoption of pop-up sunroof is a growing trend in the market, which is likely to support the market growth.

Rise in number of sunroof shattering incidences is a major factor expected to hinder growth of the global automotive sunroof market over the forecast period. Sunroof shattering incidences have been witnessed all over the world, due to which adoption of sunroof systems is significantly impacted, specifically in regions with harsh weather conditions. However, these incidences did not cause any harmful injuries; however, consumers are still facing anxiety and worry to opt for sunroofs in the vehicles. Thus, this factor is expected to impede growth of the market.

Another factor hampering the market growth is high cost of integration and maintenance of sunroof and low penetration in low segment vehicles. The sunroofs include several different components such as console controller, rain sensor, and unbreakable glass panels among others. These components are comparatively expensive due to which, it adds into overall cost of a vehicle. Additionally, the cost of maintenance is also high, which further affects the adoption of sunroofs and limits the market growth. 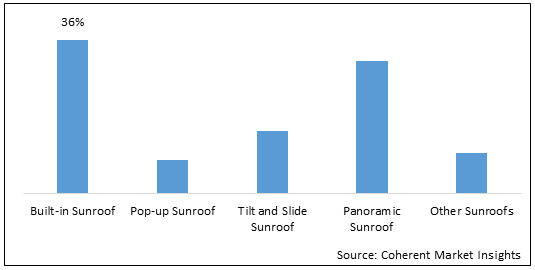 Based on Sunroof Type, the market is segmented into Built-in Sunroof, Pop-up Sunroof, Tilt and Slide Sunroof, Panoramic Sunroof, and Other Sunroofs. Out of which, Built-in Sunroof segment is expected to dominate the global market over the forecast period and this is attributed to the rise in demand for vehicles with factory-fitted sunroofs in regions such as Asia Pacific, specifically in countries like Korea and India.

Pop-up Sunroof segment is also expected to witness significant growth in the near future and this is owing to the growing demand for pop-up sunroofs due to various advantages offered by them. Pop-up sunroof require limited maintenance and are simple for external cleaning, due to which they have become highly popular in recent years. This in turn increases adoption of pop-up sunroofs and drives growth of the segment.

Based on Vehicle Type, the market is segmented into Hatchback, Sedan, Sports Utility Vehicle (SUV), Commercial Vehicle (Pickups). Out of which, Hatchback is expected to dominate the global market over the forecast period and this is attributed to the growing demand of mid-size hatchbacks as well as passenger vehicles. Vehicles in the hatchback segment are mostly mid-size hatchback vehicles having premium features, such as Mini Cooper Countryman, Hyundai Elantra GT, and Hyundai Veloster among others. Such vehicles are highly adopted in countries such as India, China, Korea and Thailand.

Sports Utility Vehicle (SUV) segment is also expected to witness significant growth in the near future and this is owing to the continuous rises in demand for SUVs across the globe. For instance, according to the Coherent Market Insights data, nearly 29.77 million units of SUVs were sold in 2018 all over the world.

Based on Sales Channel Type, the market is segmented into OEM and Aftermarket. Out of which, OEM is expected to dominate the global market over the forecast period and this is attributed to the increase in launch of novel car models with sunroof as cost-effective and standard feature, by several market players worldwide.

Aftermarket segment is also expected to witness significant growth in the near future and this is owing to the high demand for aftermarket resulting from accidents caused due to electric faults or damages to the sunroof parts.

In September 2019, Webasto announced the launch of its Roof Sensor Module, which a roof technology having sensors and related cleaning and thermo systems. The company implemented openable and transparent roof systems with high rigidity and integrated sensors.

In August 2019, Webasto started its manufacturing plants for automotive parts with EUR 40 million investment, in Irapuato, Mexico. This new plant can accommodate the expanded capacity of production for panoramic roofs and sunroofs.

The global automotive sunroof market is highly competitive. This is attributed to continuous launch of new technologies due to ongoing R &D and efforts by value chain participants. Moreover, key players are adopting various business growth strategies in order to expand their presence on regional as well as global basis.

An automotive sunroof is a movable panel that opens up on top of an automobile. Its purpose is to let light and fresh air into the passenger compartment. It can be motor-driven or manually operated. They are available in many different styles and shapes.

Automotive Sunroofs are made from movable panels installed on the roof of a vehicle, and allow fresh air and light to enter the passenger compartment. This also improves the climate inside the vehicle. Auto sunroofs are available in a variety of shapes and sizes, and can be motorized or manually operated. They increase the comfort of the passengers in the vehicle and provide superior illumination during daytime.

While the sunroof is an attractive feature, it is also a significant safety concern. While it's easy to enjoy the view from the sunroof on a sunny day, the added weight of the roof creates a secondary point of infiltration for rain. Besides allowing more water to enter the interior, sunroofs also pose a distraction to the driver while driving. These sunroofs also have the potential to break the seals over time due to excessive exposure to sunlight.

Several factors are driving the global Automotive Sunroof Market, including significant growth in the automobile industry. Rising per capita income and consumer spending are fueling increased sales of passenger cars. Another important factor driving the automotive sunroof market is the development of light reactive windows. These technologies can reduce the amount of light that comes into the interior of a vehicle and also help with air conditioning efficiency.

Although the Global Automotive Sunroof Market is expected to expand at a moderate pace during the forecast period, factors inhibiting market growth include high integration and maintenance cost. Moreover, sunroofs are expensive to install and repair, and can fail for a variety of reasons. Further, sunroofs can be difficult to install in many vehicles.

Growing inclination towards sunroofs among consumers in Asia-Pacific and increasing number of automakers are offering automobile sunroofs as an optional feature are fuelling the growth of market.

Which is the leading sunroof type segment in the market?

The Built-in sunroof segment is the leading sunroof type segment in the market.

Rise in number of sunroof shattering incidences and high cost of integration and maintenance of sunroof are the major factors restraining growth of the market.