Baby diaper is also called as nappy, is a type of underwear designed to be worn by the baby as it allows babies to urinate in it. It absorb the urine and prevent the leakage of outer clothing and require changing after it gets wet or soiled as failure to changing of diaper on a regular basis can cause skin problems to the baby. Diapers are produced by using super absorbent polymer products as they can absorb a large amount of fluid relative to its own mass. Baby diapers can be classified into a cloth diaper, disposable diaper, training nappy, and training nappy. 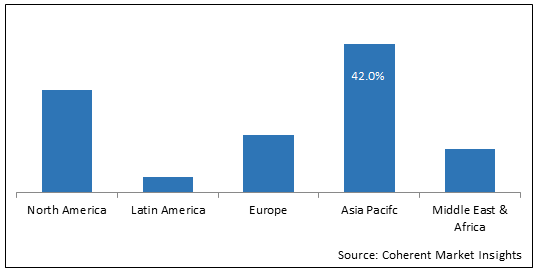 Baby diapers can cause an allergic reaction to the skin as babies have soft skin and anything that consists of harsh chemicals may harm their skin. Moreover, diapers may lead to toxicity as it is made up of synthetic materials and the chemical is expected to hamper the market growth of the baby diapers. Furthermore, using baby diapers may cause infection and diapers are also expensive, thus these factors are expected to restrict the market growth.

Increasing production of biodegradable diapers by the manufacturer is expected to offer lucrative growth opportunities over the forecast timeframe. For instance, in July 2019, Huggies, an American brand of disposable diapers and baby wipes, introduced Huggies Special Delivery with a liner and waistband made from plant-based materials, including sugarcane that provides better absorption and fit. Furthermore, the diapers have undergone dermatological testing and have been shown to be hypoallergenic in studies.

The rising launch of innovation in the baby diaper is expected to propel the market growth of the baby diaper. For instance, in July 2019, Verily, a subsidiary of Google, has teamed up with U.S. consumer goods giant Procter & Gamble (P&G) to sell smart diapers ‘that monitor baby’s sleeping patterns and track their pee. P&G sold the new product, Lumi, under its own company Pampers which comprises an all-in-one connected system that includes two activity sensors for diapers, a Logitech camera that works as a Wi-Fi monitor and an app to record all the data. 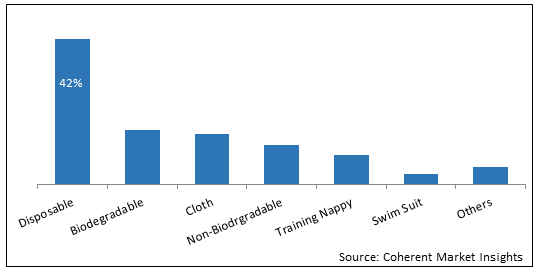 On the basis of product type, in 2021, disposable diapers accounted the largest market share of 42% in terms of revenue, followed by biodegradable and cloth diapers. This is mainly because disposable diapers provides more convenience to the parents and ensures good hygiene.

Baby diapers are absorbent polymers based fibers which absorb urine and prevent its leakage. Baby diapers are vital as they maintain hygienic conditions for infants. Global baby diaper market witnessed a growth in demand in recent past years owing to the changes in consumer’s preferences for premium personal care products that ensures a better hygiene. Companies involved in the market are focused on developing products made from advanced fibers that are non-allergic to babies’ skin, lesser weight, and provides more absorption capacity.

Among Style, consumers are opting for pant style diapers due to the comfort, ease of use and convenience for parents. This is expected to boost the demand for pant style diapers in next few years. New product launches in the baby diaper market have encouraged the use of ultra-soft fibers with more aesthetic properties.

Parents have firmly embraced using baby diapers due to the growing awareness regarding maintaining the hygiene of infants. Continuous improvements in diaper fabric, absorption capacity, and unique user-friendly features have caused rivals to earn a larger market share. Bio-based disposable diapers are being developed by manufacturers in response to rising consumer desire for healthy and hygienic products, which is also anticipated to boost market demand.

What was the global baby diapers market size in 2021?

Rising advertising and promotion of baby diapers by the key players across the globe is mainly driving the market growth.

The increasing production of biodegradable diapers by the manufacturers and rising launch of innovative baby diaper products are expected to provide lucrative opportunities for the market growth of baby diapers.