Press Release: Botanical and Plant Derived Drugs Market to Surpass US$ 51.93 Billion by 2026

Botanical and Plant Derived Drugs Market to Surpass US$ 51.93 Billion by 2026 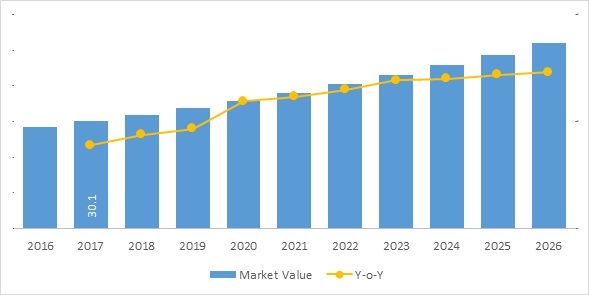 In several diseases, there is no cure for chronic pain. Therefore, physicians prefer pharmacologic methods to treat pain and decrease the suffering of patients. Patients suffering from intractable chronic pain, which cannot be managed with conventional treatment methods, prefer botanical and plant derived drugs. Lung cancer is the leading cause of death in the Eastern, Southern, and Southeastern Asia.

According to the 2013- International Agency for Research on Cancer data, in 2012, 1,033,881 cases of lung cancer occurred only in Asia. In addition, Eastern, Southern, and Southeastern Asia region accounts for 56% of the world’s population and contributes to 44% of the total cancer cases, worldwide according to the statistics mentioned in The Cancer Atlas. High cost of developing and manufacturing conventional drugs is propelling demand for alternative solution, such as plant-derived drugs that cost less than conventional drugs. Requirement of less technical experts and low capital investment for manufacturing botanical and plant-derived drugs. For instance, in October 2016, Napo Pharmaceuticals, Inc. launched Mytesi, an antidiarrheal indicated for the symptomatic relief of noninfectious diarrhea in adult patients with HIV/AIDS on Antiretroviral Therapy (ART).

Government is taking initiatives for the development of new plant-based drugs with herbal medicine gaining significant traction from the global healthcare systems. China utilizes herbal medicines for treatment of diseases such as acute respiratory syndrome. World Health Organization (WHO) along with economies such as India, China, the US, and Nigeria are majorly investing in research and development for herbal drugs.

Botanical and plant derived drugs contain active ingredients derived from plants. The botanical drug is a mixture of plant materials that include whole plant, part of plants, fungi or algae. Plants have been used as a source of medicine since past, owing to side effects caused due to consumption of synthetic drugs the botanical and plant derived drugs are preferred over the synthetic drugs.

Furthermore, the botanical drugs are clinically evaluated for safety and efficacy just as conventional drugs. Besides, this legalization of medical cannabis is also expected to foster growth of the botanical and plant derived drugs market.

The global botanical and plant derived drugs market is projected to witness significant growth over the forecast period, owing to legalization of medical cannabis. Medical cannabis was legalized in the Czech Republic, in 2013, Argentina and Chile in 2015, and in 2016, marijuana legalization in America reached a tipping point, as the medical marijuana became legal in some of the states.

Hence, many manufacturers are focused on research and development on medical cannabis to launch new drugs. For instance, one of the drug by GW Pharmaceuticals, Epidiolex consists of cannabidivarin (CBDV) is in developmental process, which will be used in clinical trials for treatment resistant epilepsy, supported by NSW and Queensland government in 2016.

Furthermore, increasing number of chronic disease supports the growth of botanical and plant derived drugs, as lung cancer accounts for the leading cause of death in the Eastern, Southern and Southeastern Asia. The region holds for 56% of the world’s population and contributes to 44% of the total cancer cases worldwide according to the statistics mentioned in the Cancer Atlas.

.Key features of the study: