Diabetes is a chronic disease caused by a lack or lower levels of insulin in the body. A person suffering from diabetes may develop sores, abscesses, ulcers, or loss of sensation in parts of the body, predominantly in the feet. The exceptional design of diabetic footwear aids in protecting the patient’s feet from injuries. In 2021,

Unique properties of diabetic footwear such as diabetic footwear provides support and protection while minimizing pressure points on the feet, decreases the risk of diabetic foot ulcers and thereby reduces amputations, etc. help heal a variety of diabetic conditions such as inadequate blood circulation in the legs and thus, helps address foot pain and ulcers which is driving the diabetic footwear growth. Diabetes is classified as Type 1, Type 2, and gestational diabetes. Type 2 diabetes, the most common type, is caused mainly due to obesity and reduced physical activity. The global diabetic footwear market is largely driven by the rising cases of diabetes, increased spending on diabetes treatment, and growing geriatric population, characterized by high incidence of diabetes.

Among region, Asia Pacific is the most dominant region in the global diabetic footwear market. In 2020, according to National Center for Biotechnology Information, around 277 Mn diabetic patients lived in this region, with over 95% diagnosed with Type 2 diabetes. The region accounted for 39.7% of the total market share in 2021, in terms of revenue. The dominance was on account of the large population suffering from diabetes coupled with an increase in expenditure on diabetes treatment and rise in the size of geriatric population. China and India are home to one-third of the total global population with India being dubbed as ‘The Diabetes Capital of the World ‘by International Diabetes Federation (IDF). Increase in has resulted in a rise in demand for diabetic footwear in the Asia Pacific region. 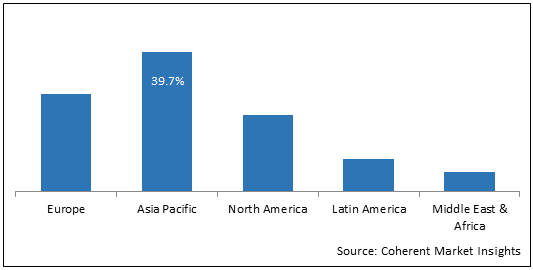 North America is the second largest region, in terms of value, in the global diabetic footwear market, followed by Europe. Various government initiatives have been put forth in the region to raise awareness on the causes of diabetes among public. For instance, American Diabetes Association is spread throughout the U.S. to raise alertness amongst the public on precautions and treatment pertaining to diabetes. In addition to this, has decided to follow November of every year as National Diabetes Month in 2006. Diabetic footwear market is expected to grow at a significant rate, owing to introduction of new brands in market. Growing popularity of e-commerce is expected to have a positive impact on the growth of the global diabetic footwear market. Large geriatric population in North America and Europe accounted for a rise in the number of diabetic cases in these regions. In 2018, according to Population Reference Bureau, a private non-profit organization specializing in collecting and supplying statistics necessary for research, Statistics Canada and EU, North America had a population of 51 million geriatrics, whereas Europe had a population of 94 million. The aforementioned factor is expected to drive the market growth in North America region over the forecast period. 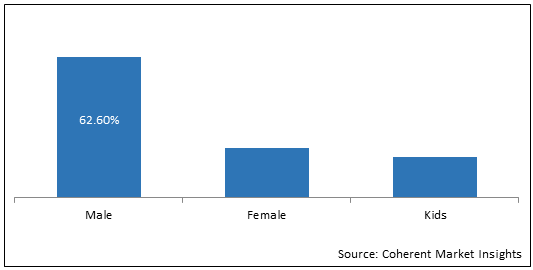 Global economy had been affected by coronavirus pandemic, as of countries across the globe imposed lockdown measures to curb the movement of people. Various governments of countries across the globe had opted for lockdowns due to which industrial activities halted and international travel was ceased. These measures took a significant toll on almost all industrial sectors. Factories and manufacturing facilities of diabetic footwear faced supply chain breakdowns and labour shortages.  The COVID-19 pandemic continued to hamper the supply chain of the diabetic footwear and the pandemic put the diabetic footwear industry’s . European countries such as Germany, Poland, the U.K., Italy, and France were the prominent regional markets in terms of both   of diabetic footwear. These countries have been most heavily impacted by COVID-19. The pandemic has slowed the expansion of new diabetic footwear manufacturing facilities due to labor shortage and disruptions in raw material supply. Because of such interruptions to global trade, demand for diabetic footwear has halted, which in turn is expected to restrain market growth.

Diabetes is a disorder caused due to the lack or low levels of insulin in the body. Diabetic footwear helps address various diabetic conditions such as inadequate circulation of blood to the legs and in turn, helps cure various foot ulcers and other foot-related complications. Diabetic shoes, also known as therapeutic shoes, are specially created and manufactured for diabetic patients to reduce the chance of developing numerous skin problems include bacterial infections, fungal infections, and itching. The primary goal of diabetic footwear is to prevent complications such as ulcers, strains, and amputations in diabetes patients. Customized and specially designed diabetic shoes with specific key features like comfort are becoming popular among the diabetes patients across the world as it helps in minimizing the risk of skin breakdown in diabetic patients. Increasing innovation activities by key players to develop fashionable and customized footwear to meet up with the recent trend, fashion primarily coming from the female population is playing an important role in growth of the diabetic footwear market.

What was the global diabetic footwear market size in 2021?

Global Diabetic Footwear market was valued at around US$ 7783.5 Million in 2021.

The rising shoe industry is one of the major factors that is expected to drive growth of the market over the forecast period.

Various government initiatives to increase awareness for diabetic footwear is expected to create demand for Diabetic Footwear, which is one of the key trends in the market.

High cost of diabetic footwear is expected to be the key challenge for market growth during the forecast period.

What is the estimated CAGR for the market during forecast period?