Dimer acid is a chemical compound with C36H68O4. It is a light yellow transparent liquid and is widely used to produce hot melt adhesives and polyamide resins. Dimer acid is also referred to as dimerized fatty acids and composed unsaturated fatty acids that are produced from oleic acid, canola oil, and tall oil. Dimer acid is also used in the production of adhesives, surfactants, fuel oil additives, alkyd resins, and lubricant. They are non-toxic in nature and can be used in the production of reactive and non-reactive polyamides for epoxy resins, corrosion inhibitors, polyol esters, personal care products, and oil field drilling muds.

Growing demand for bio-chemicals across the various end-use industry is expected to foster the market growth of dimer acid. Dimer acid is mainly produced from raw materials such as Tall Oil Fatty Acids (TOFA) and Vegetable Oil Fatty Acids (VOFA), such as soybean oil, rapeseed oil, cottonseed, etc. Therefore, dimer acid is obtained from renewable raw materials, and are biodegradable and hence this factor is expected to fuel the demand for dimer acid around the globe.

Regionally, Asia-pacific dominated the global dimer acid market in 2018, reporting 32% market share in terms of revenue, followed by Europe and North America, respectively. This is due to rapid growth of various end-user industries in Asia-pacific.

Growing opportunities from the automotive sector where dimer acid is used in the production of corrosion inhibitors are expected to foster the market growth of dimer acid. According to the India Brand Equity Foundation, India became the fourth largest auto market in 2018 with sales increasing 8.3% year-on-year to 3.99 million units. It was the seventh-largest manufacturer of commercial vehicles in 2018. Therefore, growing sales of the automobile are expected to foster market growth.

Growing environmental concern is a major factor that is encouraging the user to adopt dimer acid as it is a bio-based product and this trend is estimated to stimulate the market growth of dimer acid. Dimer acid is one such chemical that is produced from natural renewable sources, such as vegetable oil. Also, demand for dimer acid-based polyamides polyurethanes has been witnessed steady demand over the recent few years and this is expected to foster market growth.

Growing production of dimer acid production in china is expected to propel the market growth of dimer acid. According to the Coherent Market Insights, China has emerged as the key producer of dimer acids as the country is home to numerous small & medium scale manufacturers of dimer acid who provide lower-priced products as compared to their global counterparts. Moreover, the lower cost of production in China along with the easy availability of raw material is a major factor augmenting the growth of the dimer acid market. 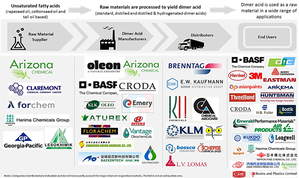 The global dimer acids market has witnessed a surge in growth in recent past tears, owing to the eco-friendly nature of dimer acids. On addition to this, dimer acids finds its applications in various types of end-user industries such as automobile industry, printing inks, paints, coatings, oil & gas and others, which in turn, is expected to foster the demand for dimer acids globally in the forthcoming years.