Dolomite is a type of limestone, a type of sedimentary rock that contains a high percentage of the mineral dolomite. Calcium magnesium carbonate along with calcite and aragonite dolomite makes up approximately 2% of the earth’s crust. Dolomite crystals are colorless, white, buff-colored, pinkish, or bluish. Granular dolomite is a light to dark gray, tan, or white granular dolomite found in rocks. Dolomite crystals are translucent or nearly opaque, whereas dolomite grains in rocks are translucent or nearly opaque. Dolomite occurs widely as the major constituent of dolostone and dolomite marble. Dolomite-rich rocks in marine sequences originate from petrogenesis (formation of rocks, ingenious rocks). Dolomite is used to make refractory bricks because it contains magnesium metal and magnesia (MgO). Dolostone is often used for limestone in cement and bitumen mixes, as well as a flux in blast furnaces.

One of the key factors expected to stimulate market growth during the forecast period is multiple applications of dolomite in various industries. Dolomite is widely used in the building & construction industry. Aggregates made up of industry-waste dolomite are characterized by very high compression strength and resistance against abrasion and other mechanical impacts. Dolomite aggregates must meet a variety of criteria and requirements, depending on their intended application, to ensure the long life of building structures built on aggregate foundations and to assure their safe use.

Limestones and dolomite are also used as fluxes in smelting of metalliferous ores. They combine with impurities in the ores such as silica and alumina to form a fluid slag which can be separated from the metals. Dolomite is also used as a flux in the blast furnace for the production of pig iron from iron ore. Increasing demand for iron, especially in the construction sector, is expected to influence the global dolomite market growth.

Among regions, Asia Pacific held the dominant position in the global dolomite market in 2020, accounting for 40% market revenue share, followed by North America and Europe. According to a report by Multidisciplinary Digital Publishing Institute (MDPI) published in February 2021, mineral nutrients are essential for adequate growth, productivity, and health of all food-producing animals. Magnesium is considered one of the seven macro minerals that are essential in farm animal diets. Dolomite is the best source of magnesium and calcium used for animal feed, Dolomite is the best source of magnesium and calcium for animal feed, and the performance and efficacy of modern high-producing farm animals, as measured by feed conversion rate (FCR, kg feed per kg of animal product), has increased dramatically in recent decades, possibly contributing to changes in nutritional requirements of food-producing animals. 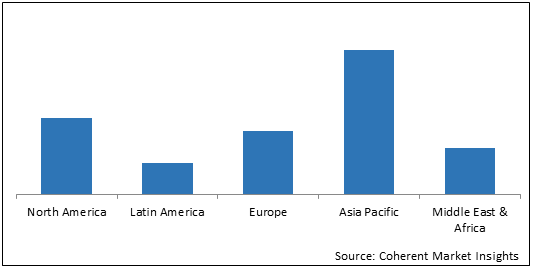 High-grade phosphate reserves have begun to diminish worldwide, and consequently, low-grade phosphate rock is now explored as a potential fertilizer. Low-grade fertilizer is becoming popular in the agriculture sector because of its cost effectiveness and high availability, which is hampering the dolomite demand in the fertilizer industry. Another constraint to the dolomite market is that it must be activated during the fertiliser manufacturing process, which increases the amount of phosphorous and activates some heavy metals. Metals such as Cd, Cr, Cu, Pb, and Zn are active during the activation process. Impurities present in dolomite fertilizers such as lead (Pb) and arsenic cause several problems to humans after the consumption of arsenic- and lead-rich foods. Long-term exposure to arsenic from drinking-water and food can cause cancer and skin lesions. It has also been associated with cardiovascular disease and diabetes. Short-term exposure to lead causes vomiting, diarrhoea, headache, stomach ache, and fatigue. Long-term side effects could be learning disabilities, hyperactive disorder, and several neurological disorders. Such side effects could be the major restraints for the dolomite market.

Dolomite is very important in the oil & gas and biofuel industries to control density and refine biofuels. According to the press release, biofuel is facing a 3% rise in its demand worldwide. Dolomite consists of 50% of the carbonate rocks and significantly holds volumes of oil and gas in the world. A study on different chemical compositions of carbonate material conducted at the Department of Petroleum Engineering at Texas A&M University in June 2021, Variations in the chemical composition of dolomite and calcite minerals were used to demonstrate that a one-size-fits-all approach to well stimulation in carbonate reservoirs does not always work. These formations can be found all over the globe, the research has attracted the attention of several major oil and gas companies that want to collaborate and improve well stimulation operations. This research will help the extraction process of oil and gas from the reservoirs and improve the productivity of the oil and gas reservoirs. Due to its various applications dolomite market is growing rapidly. 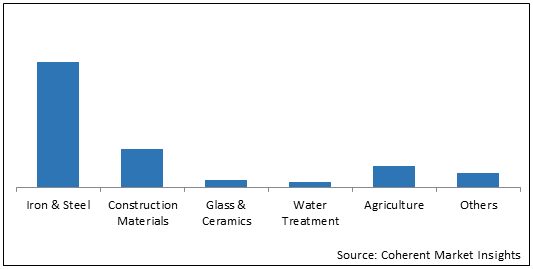 On the basis of end-use, in 2020, iron and steel sector accounted for the highest market share of 58.7% in the global dolomite market. Steel demand in numerous end-use applications is predicted to increase during the forecast period, allowing it to maintain its dominance. Dolomite is used as a refractory material in steelmaking converter lining, opening hearth furnace, and electric furnace wall. The growing demand for refractory materials pushed market players to increase their manufacturing capacity. For instance, in June 2018, RHI Magnesita, a supplier of refractory products announced that it would invest Euro 20 million (US$ 23.5 million) to expand its operations at its dolomite site in China to help address global constraints in the refractory industry's raw material supply. China has become the second-largest producer of magnesium after the U.S. market. Magnesium has applications in aircrafts, missiles, and components of laptops and televisions. Dolomite contains 13% of magnesium and 23% of magnesium oxide. The increasing demand for magnesium is profiting the dolomite market.

Dolomite is used as a raw material for various industries such as glass, ceramic, cement, ferroalloys, and fertilizers. A major part of dolomite comes from the mining industry; however, the Covid-19 pandemic has led to the collapse of production lines of mining companies. The pandemic also affected the construction industry worldwide. Other industries such as cement and fertilizers also faced downward growth. The glass and ceramic industries are the two main end users of dolomite, which contribute to the construction sector. The slowdown in the construction and cement industry during the pandemic affected the global dolomite market growth.

Dolomite is an anhydrous carbonate mineral composed of calcium magnesium carbonate. An alternate name used for dolomite is dolomitic rock or dolostone. Dolomite has a wide range of applications in various industries but the primary application is found in the steel & iron industry and construction sector. Dolomite is found worldwide in the form of bedrocks but the primary deposits are found in the Midwestern U.S., Ontario, Canada, Switzerland, Pamplona, Spain, and Mexico. Dolomite is used in the refractories as a fluxing material. It is also used in the water purification and sludge treatment industries such as desalination plants and RO plants. Dolomite is used as a rich source of calcium and magnesium in the pharmaceutical as well as animal feed industry.

Dolomite is generally used in paint as a filler. Dolomite is a hard mineral, thus it imparts very good scrub resistance to the paint. It is a white extender, which does not temper the paint color and gives opaqueness to paint film. It is easy to disperse due to its hydrophilic nature same as calcium carbonate. Dolomite is slowly gaining market with better consistency and quality with more equivalent grades than calcium carbonate in the paint industry. Dolomite also has the ability to grow in volume over time, allowing it to compete with calcium carbonates in a wider spectrum of goods. Dolomite is becoming more popular in the paint industry as a result of these factors. In the paper and pulp manufacturing sector, dolomite has been used in paper and cardboard production by adding it into cellulose in different proportions. Dolomite increases the whiteness of paper due to which there is a lesser requirement of additional optical brighteners. This makes it cost-effective as well as environmentally friendly. Dolomites helps to keep less water and increases the amount of drawn water, thereby increasing the production speed. These advantages of dolomite over calcite is driving the global dolomite market growth.

The dolomite has a variety of applications in various industries. It is used as a filler in the glass and ceramic industry. Dolomite is also used as a source of magnesium oxide for making magnesium metal and chemical uses, such as the common laxative milk of magnesia. Dolomite is used in some types of cements and as mineral specimens. Crushed dolomite aggregates are used for the construction of concrete mixtures.

What will be the global dolomite market size in 2028?

Multiple applications of dolomite in various industries. Dolomite is widely used in the building & construction industry which is a major driving factor.

Dolomite is used in nutrition supplements, as it is a high source of calcium and magnesium. This is the latest trend in the market.

Along with calcium and magnesium, dolomite is rich in various harmful minerals which are difficult to separate, and their presence in dolomite-based products could hamper the market.