Foot and Mouth Disease (FMD) is infectious disease in domestic animals caused due to viral strain Aphtovirus of the family picornaviridae. It majorly affects cloven hooved livestock such as cattle, goat, sheep, swine, and other animals. It can spread through both direct and indirect modes. Foot and mouth disease causes high morbidity in animals and results into significant economic loss due to decreased milk productions, permanent hoof damage, and chronic mastitis.

Although adult animals can recover from disease, mortality is high among young animals, as immunity is not well developed due to which foot and mouth disease vaccination is essential. Disease is characterized by the fever and blistery sore on tongue, lips and oral cavity. Foot and mouth disease is best preventable by vaccinating the livestock. There are total seven strains (A, O, C, SAT1, SAT2, SAT3, and Asia1) of virus that affects animals, symptoms produced are similar in each strain and they can be distinguished only through laboratory tests. Various regions around world are affected by different set of viral strain therefore each strain requires specific vaccine to prevent the infection. Inactivated vaccines are available to prevent animals from being infected by FMD 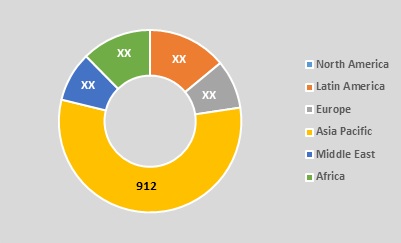 FMB outbreaks affects food industry as it negatively impacts the export of milk, meat, and other animal products due to viral infection. 23 countries from Africa, Asia Pacific, Europe and Middle East reported outbreak of the FMD to the World Organization for Animal Health (OIE) in 2015 - 16. In India, annual loss of more than US$ 85 billion is reported each year due to FMD outbreak, which is negatively affecting dairy sector GDP of India.

Although foot and mouth disease is eradicated from North America and Western Europe, various economies of Asia Pacific, Africa and Latin America witnessed high incidences of epidemic in recent past, which is propelling demand for vaccines against foot and mouth disease in these regions. Various economies such as China, India, Brazil, Thailand etc. are at high risk of FMD outbreak, according to Monthly Report- Foot and Mouth Disease Situation by Food and Agricultural Organization published in February 2018.

However, vaccination against FMD may not prove to be effective by the antigenic diversity of the virus, the short-lived nature of protective immunity developed after vaccination and the temperature sensitivity that alters stability of FMD vaccines, which may restrain growth of the FMD vaccine market. 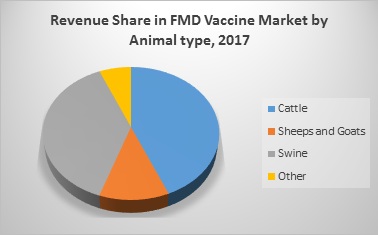 High animal density and increasing population of livestock animal is expected to be major impetus for the growth of FMD vaccine market. According to U.S. Department of Agriculture data in 2017, India has cattle in number around 300 million, followed by Brazil and China. According to the factsheet by United Nations Food and Agriculture Organization (UN-FAO), worldwide there is close to one billion headcount of swine. China has highest number of swine headcount numbering 455 million. Infected animals can transmit infection to other animals if their movement is not restricted. Vaccination of animals for FMD prevents future risks and creates sustainable growth for animal population worldwide especially in a region, which are prone to FMD outbreak.

Foot and Mouth Disease (FMD) is infectious disease, which majorly affects cattle, sheep, goats and swine. It is highly prevalent in regions such as Asia pacific, Latin America, Africa, Middle East and Eastern Europe. Foot and mouth diseases are gaining significant traction due to its economic impact on food industry, as it affects milk and meat production. Therefore, FMD vaccine play important role in the prevention of disease. Both oil-based and aluminum hydroxide adjuvants variety are available. However, oil-based vaccine hold dominant position in the FMD vaccine market

Outbreak of the foot and mouth disease and associated economic loses are important driver for the growth of the FMD vaccine market. According to World Organization for Animal Health (OIE), around 23 countries from Asia Pacific, Latin America and Africa reported FMD outbreak in the 2016. According to journal Acta Tropica published in May 2017, prevalence of FMD in Ethiopia ranges from 5.6% to 42.7% in cattle and from 4% to 11% in small ruminant and in 30% in ungulate wildlife. Five of seven serotypes, namely serotype O, A, C, SAT1 and SAT2 are most commonly observed. This hampers animal rearing and trade practice at significant extent. Government initiatives to combat FMD outbreak would be another important driver for growth of FMD vaccine market. In March, 2007, Argentina, Brazil, and Paraguay government committed to intensive vigilance for FMD in a shared zone encompassing a small area along both sides of their common borders. The agreement became effective due to joint evaluation mission by OIE