Genetically Modified Crops Market to Surpass US$ 37.46 Billion by 2027

Genetically modified crops are plants which are utilized in agriculture, and their DNA has been modified using genetic engineering methods. The numerous benefits offered by GM crops are currently driving the market growth. Genetically modified crops offer enhanced nutritional value, longer shelf life, improved yield and have high resistivity to frost, drought and insect pests. For instance, Roundup GM soybeans are inserted with the gene that delivers maximum weed control.

However, stringent regulations and delayed approvals by regulators on GM crops is hindering the growth of genetically modified crops in the global market. An article titled ‘The consequences of delayed approvals of GM crops’ published in 2017 states that the approval process for GM crops is slow in almost all the countries, especially in the European Union. This is due to the involvement of political activities in the approval process of GM crops. Therefore, the aforementioned factors are expected to hinder the genetically modified market growth during the forecast period.

Asia Pacific is expected to witness significant growth in the genetically modified crops market during the forecast period due to partnerships between key players focused on the development of GM crops for farmers. For instance, in 2016, DuPont Co. partnered with Origin Agritech Ltd., a seed manufacturer based in China. The partnership is aimed at development of genetically modified crops for farmers in China. Therefore, such strategic partnerships in Asia Pacific region are likely to fuel the market growth during the forecast period. 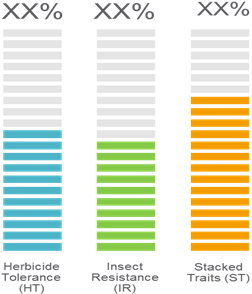 Key players are adopting growth strategies such as acquisitions in order to gain market share in the global genetically modified crops market. For instance, in 2016, Bayer AG, a pharmaceutical and life science company based in Germany acquired Monsanto’s GM seeds business, which is known for its GM seeds for crops. The acquisition of Monsanto’s GM seeds business valued at US$ 66 billion.

Major players in the global genetically modified crops market include Bayer AG, BASF SE, Syngenta AG, and The Dow Chemical Company, among others.

The growing agriculture industry has led to growth of genetically modified crops to meet rising demand for food across the globe. According to the Food and Agricultural Organization’s (FAO) report, in 2015, over 11% of the world’s land which accounted for 1.5 billion ha was used for crop production, and over 2.7 billion ha land possesses potential for crop production. Also, according to India Brand Equity Foundation (IBEF), in India, during 2017 – 2018, food grain production was pegged at 285.01 million tons and is expected to grow at a faster pace over the forecast period. Moreover, according to FAO forecast, the projected increase in the world crop production from 1999 to 2030 is 55%.