The holographic film is a very thin and flexible plastic film which is basically micro-embossed with patterns or even images. Patterns are created on the film is done by the embossing process to provide 3-D effect and/or spectral (rainbow) coloring. Holographic film is mainly used for promotional purposes as they are attention-grabbing due to the touch of electroforming and coatings &embossing. They have flexible texture with 3-dimensional effects and flawless finish. Gift wrapping, security stickers, labeling products, promotional brochures and packaging products are some of the major application areas of Holographic film.

On basis of the region, Asia Pacific dominated the global holographic films market, in 2018, accounting for 33.9% share in terms of revenue, followed by North America and Europe respectively.

Fluctuating prices of raw materials prices which are used for the production of holographic films such as Polyethylene terephthalate (PET), polyethylene (PE), and Poly Propylene (PP) is expected to hinder the market growth. Fluctuation in Price of crude oil is directly impacting the production of film manufacturers, as raw materials are derived from crude oil. Hence, such fluctuation is expected to restrict the market growth of holographic films over the forecast timeframe.

The growing focus of manufacturers to increase the investment in the development of more holographic film is a major trend that has been observed in the market and this trend is expected to augment the market growth. For instance, in May 2017, API has increased its holographic foil and film manufacturing capabilities after completing a recent US$ 0.54 million investment at its Livingston facility in Scotland. Such investments will favor the market growth in the near future.

Increasing launch of anti-counterfeiting packaging film by major players is expected to foster the market growth of holographic film in the near future. For instance, in June 2016, DuPont Advanced Printing (DuPont) has launched a new anti-counterfeiting film that it says is “revolutionary” in terms of enhanced security for packaging applications. New DuPont Izon 3D security film utilizes the company’s imaging technology to integrate anti-counterfeiting features directly onto product packaging or labeling. 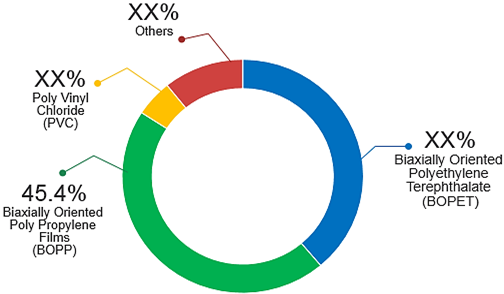 Holographic films are excellent to curb counterfeiting as they provide protection and avoid tempering. These films are available in in various standard sizes and can be customized as per specifications of consumers. Holographic films can be used in gift wrapping, packaging and lamination process.

Furthermore, Asia Pacific dominated the global holographic films market in 2018, owing to the growing adoption for hologram technologies for various end-use industries such as food & beverages, medical, cosmetics, and automotive industries in this region. As a result, this scenario is estimated to foster the growth of global holographic films market in the forecast timeframe.