Hydropower, also known as water power, is an energy source that utilizes fast-running, falling water to generate electricity. It uses two types of energy - gravitational potential and kinetic energy. Hydropower is a sustainable form of energy production. It works by harnessing the force of moving water. Moving water is part of nature's cycle. Waterfalls and rises and condenses into clouds in the atmosphere. Flowing water through these clouds causes the turbine blades to spin, turning a generator. Power is then transferred from the generator through a transmission line to homes and businesses. As long as the water is flowing, hydropower is a renewable source of energy. Compared to wind and solar energy, hydropower is clean and renewable.

Asia Pacific held dominant position in the global hydropower market in 2021, accounting for 38.78% share in terms of volume, followed by North America and Europe, respectively. 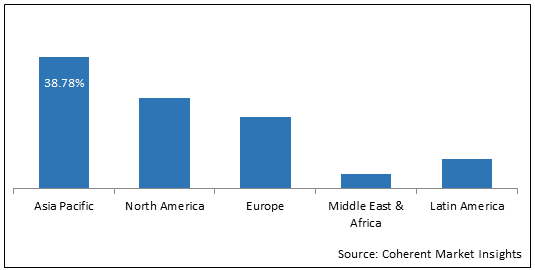 Rise in demand for reliable source of electricity is again expected to boost the market growth. For instance, hydropower is a proven renewable energy resource generated and used in all regions for over a century. Hydropower facilities can quickly go from zero power to maximum output, making them exceptionally good at meeting rapidly changing demands for electricity throughout the day. 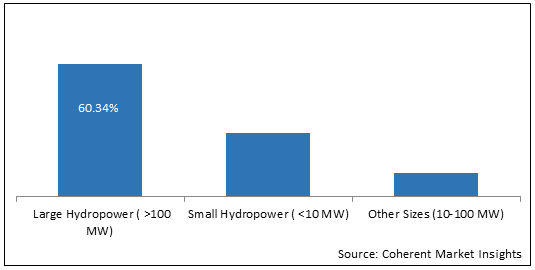 Negative environmental impact of hydropower is expected to restrict the market growth. Most hydroelectric power plants have a dam and a reservoir. These structures may obstruct fish migration and affect their populations. Operating a hydroelectric power plant may also change the water temperature and the river's flow. These changes are likely to harm native plants and animals in the river and on land. Moreover, flooding land for a hydroelectric reservoir has an extreme environmental impact; it destroys the forest, agricultural land, and scenic lands.

High initial cost of hydroelectric infrastructure is another key factor projected to hamper the market growth.

Growing demand for renewable source of energy is again expected to play significant role in the overall development of market. According to the Center for Climate and Energy Solutions, globally, renewables made up 29 percent of electricity generation in 2020, much of it from hydropower (16.8 percent).

Countries such as Japan, Vietnam, and South Korea have been investing heavily in hydropower sector, which is further projected to accelerate growth of the market. For instance, in October 2018, Japan International Cooperation Agency (JICA) signed an agreement with the Government of India to provide Official Development Assistance (ODA) loan of 5,497 Bn Japanese yen (approximately INR 315 Crore) for the ‘Project for Renovation and Modernisation of Umiam-Umtru Stage III Hydroelectric Power Station" in Meghalaya.

Hydropower, also known as water power, uses falling or fast-running water to generate electricity. This form of renewable energy uses kinetic and gravitational energy from water, and is a good option for a more sustainable method of energy production. The most common source of energy for hydropower is water. It is the natural energy source that provides electricity without polluting the environment.

Growing initiatives by government to increase the number of hydropower coupled with the increasing demand for reliable source of electricity are major factor driving growth of the hydropower market. For instance, in June 2020, the first unit of the 10,200-MW Wudongde hydropower station was connected to the grid for power generation and completed 72 hours of trial operation. It is the third hydropower station with a capacity above 10,000 MW in China and the seventh in the world. The project is scheduled to be operational in 2021, reaching an annual power generation of 39 million MWh.

However, negative environmental impact of hydropower and high initial cost of hydroelectric infrastructure are expected to hinder the market growth.

Growing government initiatives to encourage the adoption of hydropower are fuelling the growth of market.

The large size segment is the leading component segment in the market.

Negative environmental impact of hydropower and high initial cost required for hydroelectric infrastructure are the major factors restraining growth of the market.