Press Release: Global Industrial Gloves Market To Surpass US$ 10.4 Billion By 2025, Due to Increasing Use in Various Industries

Global Industrial Gloves Market To Surpass US$ 10.4 Billion By 2025, Due to Increasing Use in Various Industries

Industrial gloves are used to assure the safety of employees and to maintain safe working conditions at the work place. Industrial gloves are made up of both synthetic and natural raw materials. They are resistant to chemical reactions, abrasion and corrosion, and can withstand low and high temperature conditions. Additionally, these gloves can be specially contrived for handling electrical equipment. The type of glove depends on the environment, time period involved, and type of hazardous contaminants involved in the manufacturing process. For example gloves resistant to chemical environments have altered properties and configurations than their heat resistant counterparts. According to the Health and Safety Executive (HSE) of UK data studied from the Labour Force survey in 2016, approximately 10,000 workers were injured due to workplace injuries. According to the study, agriculture, forestry, and fishing sector have accounted 4,390 injuries followed by construction, transport/storage, and manufacturing. Depending on the need the gloves, they can be re-used or disposed off.

On the basis of product type, re-usable industrial gloves segment was the leading segment in the industrial gloves market and is expected to dominate during the forecast period. According to Coherent Market Insights, the re-usable industrial gloves segment accounted for US$ 3,378.4 million in 2016 and is expected to reach US$ 6,148.7 million by 2025. Re-usable gloves have various advantageous such as more impenetrable, longer life, and offers better protection than disposable gloves. The main factors promoting growth of re-usable gloves are its wide acceptance due to its unique features, which is compatible with human skin and hand. They are used in industries dealing with toxic chemicals and liquids as it provides barrier against the toxic chemicals effectively. However, the re-usable gloves has to be cleaned regularly post-usage and thoroughly dried before storing to avoid contamination. During longer uses of re-usable gloves, a thorough check or scrutiny must be done for leaks or cuts before use.

The main materials used in the production of industrial gloves are nitrile, rubber, vinyl, neoprene, and polyethylene. Rubber was the leading material in the production of industrial gloves in 2016. However, nitrile is expected to dominate during the forecast period in the segment of materials used to produce industrial gloves owing to higher chemical resistance of nitriles compared to rubber, higher resistance to punctures, durable, and more protective comparatively to its counterparts. Nitrile was valued at US$ 1,820.6 million in 2016 and is expected to grow at a CAGR of 7.95% during the forecast period. 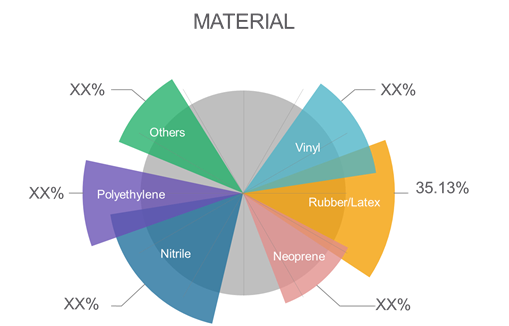 Rubber was the most widely used material in the production of industrial gloves globally. Rubber or Latex gloves are made up of natural rubber. The demand for rubber gloves are high, due to high level of touch sensitivity, elastic nature, comfortable fit, and biodegradable nature. Rubber accounted for US$ 1,977.7 million in terms of revenue during the forecast period and is expected to reach US$ 3,476.4 million by 2025. Rubber is expected to be taken over by nitrile during the forecast period. Nitrile being more durable than rubber, and offers better protection in various chemical environments. Nitrile is expected to overtake rubber to reach US$ 3,570 million by 2025, due to high puncture and chemical resistant nature of nitrile.

Industrial gloves are important protective equipment’s that work as a barrier ensuring the safety of the workers across a variety of sectors. Industrial gloves are manufactured depending on the needs of various industries. Shifting focus towards the safety of workers across construction, mining, and manufacturing activities have seen an increasing demand for industrial gloves globally. According to the OSHA, it was observed that wearing gloves reduces the risk of an injury by approximately 60%. Hence, industrial gloves play an important role in ensuring the safety of the workers across every sector. As a result, government bodies are playing an important role in ensuring that manufacturers follow the industrial safety practices. Various governmental bodies involved in ensuring safety at the workplace include The Department of Labor (DOL), Occupational Safety and Health Administration (OSHA), Mine Safety and Health Administration, Ministry of Labour and Employment amongst others.

What are the growth estimates for industrial gloves market till 2025?

The global industrial gloves market is estimated to surpass US$ 10.4 Billion by 2025.

Which are the prominent industrial gloves market players across the globe?

Which segment based on product type, accounted for the highest demand in the industrial gloves market?

Among materials, rubber/latex segment dominated the industrial gloves market in 2016.

What are the key factors driving growth of the industrial gloves market?

Increasing mishaps in various industries is one of the major factors that is expected to propel growth of the market over the forecast period.

What is the Compound Annual Growth Rate (CAGR) of the industrial gloves market for next 8 years?

The global industrial gloves market is estimated to exhibit a CAGR of 7.2% over the forecast period.

Which region is dominating the industrial gloves market growth?

Among regions, North America is expected to hold dominant position in the market over the forecast period.

Membrane bioreactor is one of the high-efficient wastewater treatment technology as it uses a microbial proc...

Coated fabrics are coated or treated with various products such as lacquer, varnishes, rubber, and thermopla...

Masks are useful in prevention of harmful substances in the air from entering the human body and helps in ke...