Latin America Barley Market to surpass US$ 2.2 billion by 2027

Barley is one most common grains widely consumed across Americans. It has little chewy consistency and a slightly nutty flavor that expand its application across many dishes. It is rich in nutrients and has other health benefits such as improve digestion, weight loss, manage cholesterol level, and promote healthy functioning of the heart. Consumption of barley helps in reducing hunger and promote the feeling of fullness which ultimately contributed to the loss of weight. Furthermore, it also helps in reducing the chances of gall stones.

Rising demand for clean label products due to shifting preferences of consumer towards natural and organic food is projected to foster the market growth of barley. Manufacture in the region are focusing on introducing clean label products by using all the natural ingredients owing to strict government rules and regulations on the usage of food additives are further projected to foster the market growth of barely in Latin America.

Easy availability of Barley in the region as it is commonly grown food in Latin America is expected to propel the market growth of the barley over the forecast period. Due to its various health benefits, its production is not restricted to a particular type or grade and the range of species is claimed to adapt in all climatic conditions. This factor makes the cultivation of grains economical in the region. Therefore, this factor is expected to propel the market growth over the forecast timeframe.

Among countries, Argentina dominated the Latin America barley market in 2018, accounting for 41.3% market share in terms of revenue, followed by Mexico and Brazil, respectively 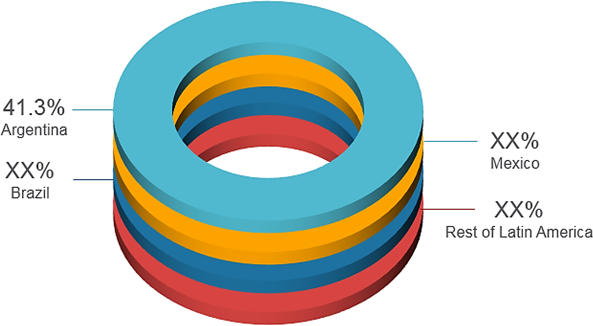 Easy availability of substitute of barley with the same characteristic as a shortage of these grains can be fulfilled by other types of grains such as rice is expected to restrict the market growth of the barley. However, the substitute for barley do not possess the same nutritional value as compared to barley but they can be used during the shortage of barley. This factor is expected to hinder the market growth over the forecast period.

Rising shortage of malt due to increasing usage of barley in breweries as malt is an essential raw material in the production of gluten-free beer is expected to restrict the market growth of barley in Latin America. For instance, around 75%–78% of the total barley malt produced globally is used by brewing industries, and hence a moderate volume remains for other applications such as pharmaceuticals, bakery, food, and distillery applications. This factor is expected to hamper the market growth of barley.

Increasing usage of barley in the production of alcoholic and non-alcoholic drinks due to its health benefits is expected to open new doors of opportunity. Moreover, barley is also used in the food industry as a source of vitamin, proteins, and carbohydrate for the preparation of salad dressing, soups, bakery products, and other cuisines. Furthermore, barely is also used in the animal feed due to its high-nutritional value and clean label products are projected to foster the market growth of Latin America barley market.

Growing application of barley in the production of medicine for treating blood sugar level, blood pressure and cholesterol level is expected to propel the market growth. Moreover, it is also used to produce medicine for diarrhea, stomach pain and inflammatory disease. Furthermore, barley is also applied to the skin for treating skin related problem such as boil which is also expected to raise the market growth of the barley over the forecast period.

On the basis of product type, in 2018, barley malt accounted the largest market share of 36.8% in terms of revenue, followed by whole grain barley and barley flour, respectively. Barley malt dominated this segment owing to the rise in demand for healthy malt based alcoholic beverages among consumers.

Rising research programs by a scientist for improving the production of seed varieties and to increase the production of barley is expected to fuel market growth over the forecast period. For instance, in May 2016, The Holetta Agricultural Research Center and International Center for Agricultural Research in the Dry Areas (ICARDA) worked in collaboration and launched two varieties – HB1963 and HB1964 – these varieties yield three-times that of regular varieties. 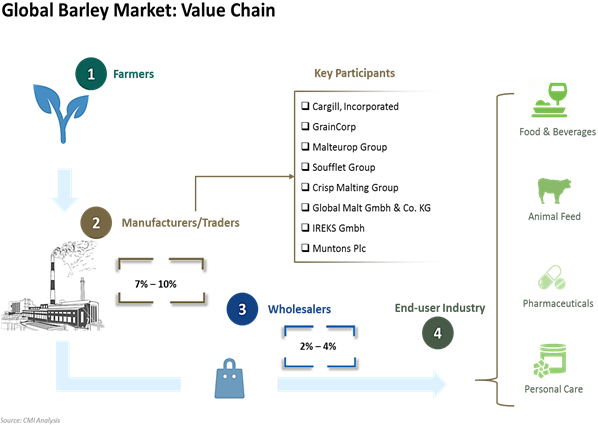 Barley is a cereal grain which is a very rich source of nutrients and fiber. It is used as an ingredient in a variety of food products and as a brewing agent in alcoholic and non-alcoholic beverages. In Latin America, Barley grain is cultivated abundantly in Latin America, especially in countries such as Argentina, Mexico, Uruguay, Brazil and Peru. The changes in consumer preferences towards consumption of products with high nutritional content is anticipated to fuel the market growth in forthcoming years.

The surge in demand for malted barley based beverages, especially developing regions, is expected to propel the market growth in upcoming years. Malted barley is considered as a good sources of dietary fiber, protein and manganese. Moreover, it has a low cholesterol and fat content as a result of which it widely preferred among health conscious customers. Companies are focused on developing improved variety of seeds to increase production yields.

Latin America Barley market is driven by factors, such as rising awareness for nutritional benefits of cereal based products. Barley is available in different forms such as flour, malt as well as whole grain and is widely used as a feed product. It has provides diverse range of dietary benefits as it is abundant in natural sugars such as maltose and beta-glucan.  For instance, barley helps to control glucose absorption, reduces cholesterol along with maintaining level of blood sugar.

What are the growth estimates for Latin America barley market till 2027?

The Latin America barley market is estimated to reach US$ 2.2 billion by the end of 2027, in terms of revenue.

Which are the prominent Latin America barley market players?

What are the key factors hampering growth of the Latin America barley market?

Easy availability of substitute of barley such as rice, is one of the major factors that is expected to hamper growth of the market over the forecast period.

What are the key factors driving growth of the Latin America barley market?

Rising demand for clean label products due to shifting preferences of consumer towards natural and organic food, coupled with easy availability of barley in Latin America are some of the major factors that are expected to propel growth of the market over the forecast period.

What is the Compound Annual Growth Rate (CAGR) of the Latin America barley market for next 8 years?

Which region/country held the largest market share in the Latin America barley market?

Among countries, Argentinaheld a dominant position in theLatin America barley market in 2018,accounting for 41.3% market share, in terms of revenue, followed by Mexico and Brazil, respectively.