Global Lipid Nutrition Market, by Product Type (Omega 3, Medium Chain Triglyceride, Omega 6, and Others), by Product Form (Liquid and Solid), by Source (Plant Extracts and Marine Sources), by End-use Industry (Food & Beverages, Pharmaceuticals, Personal Care, Food Ingredients, and Others), and by Geography - Trends and Forecast till 2025

Lipid is a group of organic compounds which are not soluble in water due to its non-polar nature. Lipids are categorized into fatty acids, glycerides, sterol lipids, prenol lipids, saccharolipids, and various others. Human and other mammals have dietary requirement for some of the lipids. Lipid plays an important role in the absorption of essential vitamins such as A, D, and E, energy storage, and cell signaling. It has wide applications in food & beverages, pharmaceuticals, and personal care industries. Food and beverages accounted for the major market share in the lipid nutrition market, owing to its flavor and odor enhancing properties and wide application in food items. Lipid infused products are available in both solid and liquid forms and are available in mass retail stores. Rising incidence of cardiovascular diseases and obesity is one of the major factors driving growth of the lipid nutrition market. According to the World Health Organization (WHO), in 2015, over 17 million people died from cardiovascular disease, where majority of the deaths were due to coronary heart diseases. Also, over 75% of the deaths occurred due to cardiovascular diseases take place in the low and middle income countries. In 2016, the World Health Organization (WHO) reported more than 600 million cases of obesity which were prevalent among people age 18 and above, and reported over 300 million cases of obesity among children between 5 to 19 years of age. Such incidences have created increased awareness among consumers regarding health and wellbeing, which has shifted their focus towards the consumption of lipid nutrition products. This in turn has urged the manufacturers to engage in research and development activities to introduce products with new features.

Lipid oxidation is a major problem that occurs in several food and leads to nutritional loss and incurs high processing cost. Moreover, stringent regulations imposed on food ingredients used in lipid nutrition products is a key challenge for the manufacturers to launch their products in the competitive market. The Food and Drug Administration (FDA) is taking stringent steps to prevent the entry of products in the market, which contains banned ingredients such as artificial trans-fat which is linked with heart diseases.

Among product types, omega 3 & omega 6 segments together accounted for the major market share in 2016 and both are expected to maintain their respective positions over the forecast period. Rising application of omega 3 and omega 6 lipids in medicated and non-medicated dietary supplements is one of the key factors augmenting the growth of these segments.

Asia Pacific accounted for the largest share in the global lipid nutrition market in 2016, especially in regions such as China, Japan, South Korea, and India. Increasing focus of leading players to tap the potential market in Asia Pacific is expected to have a positive impact on growth of the lipid nutrition market in the region. In 2017, Archer Daniels Midland Company established its new feed premix plant in Zhangzhou, South China which consists of production facilities in Dalian, Tianjin and Nanjing, as well as a new plant which is currently under construction in central China. 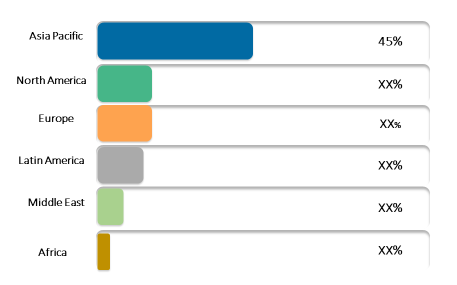 Asia Pacific held highest revenue share of 45% in the global lipid nutrition market in 2016 and the region is expected to maintain its dominance over the forecast period.

Some of the key strategies adopted by these players include mergers and acquisitions, joint ventures and partnerships, product innovations, and geographical expansion. For instance, Croda International Plc focuses on product development such as its Ωmelife brand of Omega 3 delivers micro-encapsulation technology, which contains concentrated levels of EPA/DHA per gram of oil for greater health benefits. Furthermore, it also provides the benefits of fish without the taste and smell and contains a less than 40% fat, in comparison with regular fish oil capsules that contain approximately 70% fish fat.

Lipids are primarily known to provide adequate amount of energy to muscles and other types of body processes. Excess consumption of calories results in the storage of excess energy in the form of lipids in the adipose cells. Furthermore, lipids plays a major role as an insulator that protects the human body by maintaining an adequate body temperature. Lipids are also essential for adequate digestion and absorption of food and nutrients.

What are the growth estimates for lipid nutrition market till 2025?

The global lipid nutrition market is estimated to surpass US$ 13.31 Billion by 2025.

Which are the prominent lipid nutrition market players across the globe?

What are the key factors hampering growth of the lipid nutrition market?

Rising price for fish oil, wide availability of substitutes such as phytosterols, and low penetration of lipid infused products in the emerging economies are some of the major factors that are expected to hamper growth of the market over the forecast period.

What are the key factors driving growth of the lipid nutrition market?

Growing demand for lipids from the food & beverages industry, changing dietary habits of the consumers & rising inclination towards healthy food items are some of the major factors that are expected to propel growth of the market over the forecast period.

What is the Compound Annual Growth Rate (CAGR) of the lipid nutrition market for next 8 years?

The global lipid nutrition market is estimated to exhibit a CAGR of 8.98% during the forecast period.

Which region is dominating the lipid nutrition market growth?

Among regions, Asia Pacific held dominant position in the global lipid nutrition market in 2016, and is expected to retain its dominance over the forecast period.

Dairy nutritional and nutraceutical ingredients are milk-based ingredients that are rich in essential vitami...