Press Release: Malt Ingredient Market to reach around US$ 8467.6 Million by 2027

The malt is one of the most popular cereal grains that is produced by using barley in which barley is soaked in water then dried in the hot water, this process allows germination of barley. This process is called malting. Malting process enables the starches in the grains to convert into sugars, such as glucose and fructose and glucose. There are two types of malt powder available in the market called diastatic and nondiastatic. Diastatic malt product is used during baking in order to ensure the proper rise of the baked product. Nondiastatic does not contain any enzymes and thus mainly used as a flavor in the beverages. It is gaining huge demand as a functional ingredient in the preparation of functional food such as nutritional foods and drinks as it contains essential vitamin-B and amino acid and is also consider as a rich source of fiber.

Growing demand for functional food among consumers is expected to foster the market growth of malt ingredients. According to the report published by the Institute of Food Technologists in April 2018, sales of natural and organic foods reached US$ 253 billion in 2017; functional/fortified foods totaled US$ 247 billion. Hence, the rising demand for functional food is expected to accelerate the market growth of malt ingredients.

Increasing production of grains such as wheat and barley is expected to a major role in the overall growth of the malt ingredient market. According to the U.S. Department of Agriculture (USDA), the U.S. producers harvested 1.95 million acres of barley in 2017 with an average yield of 72.6 bushels/acre. Total production in 2017 was 141.9 million bushels. Therefore, the rising production of barley is expected to fuel market growth.

On the basis of the region, North America dominated the global malt ingredient market in 2018, accounting for 38% share in terms of value, followed by Europe and Asia Pacific.

Non-availability of substitutes with the same characteristics as malts can lead to a shortage of malt ingredients is expected to hinder the market growth. However, the shortage meets by using other types of grains such as rice, this alternate does not contain the same nutritional as well as other qualities as that of barley and wheat. Hence, this is expected to restrict market growth over the forecast period.

Increasing usage of malt in breweries is leading to a shortage of malt ingredients is expected to restrict market growth. Malt is a very crucial raw material used in the manufacturing of gluten-free beer. According to the Coherent Market Insights analysis, around 75%–78% of total barley malt produced globally is utilized by brewing industries, and hence a moderate volume remains for other applications such as bakery, pharmaceuticals, food, and distillery applications.

Expanding food and beverage industry especially in the Asia Pacific region is expected to provide potential growth opportunities for the malt ingredient. India Brand Equity Foundation, the Indian food processing industry accounts for 32 percent of the country’s total food market, one of the largest industries in India and is ranked fifth in terms of production, consumption, and export. In 2017 India’s exports stood at US$ 1.3 billion. Hence, the growing food processing industry is expected to accelerate market growth.

Growing production of beer is expected to propel the market growth of malt ingredients. Barley malt is mainly used as a flavor in the production of beer. According to the National Beer Wholesalers Association, in 2018, the U.S. beer industry shipped (sold) 202.2 million barrels of beer – equivalent to more than 2.8 billion cases of 24-12 ounce servings. In addition, the industry shipped approximately 2.3 million barrels of cider, equivalent to more than 32.2 million cases.

Growing consumption of sugar-free bakery is expected to accelerate the market growth of malt ingredients over the forecast period. For instance, in November 2018, Ulrick & Short launches a gluten-free sugar replacer for bakery goods. Avanté 9 is the latest in Ulrick & Short's sugar reduction range and promises to reduce more than 20% of sugar in gluten-free bakery formulations while maintaining the volume, texture and crumb structure. 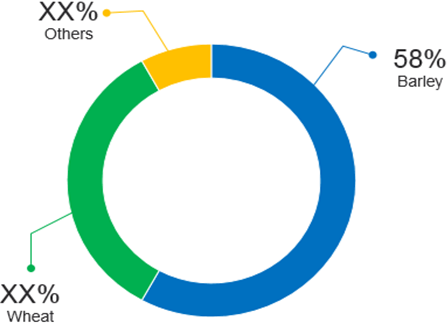 On the basis of the source in 2018, the barley segment has accounted the largest market share of 58% in terms of value, followed by wheat and others.

Malt ingredients are mainly produced from barley, rye, sorghum, wheat, and oats by using the malting process. Malting process enables the starches in the grains to convert into sugars, such as glucose and fructose. There are two types of malt powder available in the market called diastatic and nondiastatic.

Which region can dominate the global malt ingredient market?

North America is the largest and fastest growing region

What are the major growth driving factors for the malt ingredient market during the forecast period?

The rapid growing production of beer and demand for bakery food products among consumers.

Who are the prominent players in the malt ingredient market?

Malt extracts are majorly derived from barley but can be produced from other sources such as rye, oats, and ...

Probiotics are classified as beneficial bacteria’s that promote the healthy functioning of the gut. Th...

Edible insects are consumed across various regions as they are rich in various nutrients such as amino acids...