The global maritime security market size was valued at USD 20,554.2 million in 2021 and is anticipated to witness a compound annual growth rate (CAGR) of 10.2% from 2022 to 2030. The rising incidents of sea crimes is expected to boost the growth of the market during the upcoming period. Moreover, the growth of this market is supported by the increasing presence of warships in this region. This trend is also influenced by the increasing investments made by different countries in Asia Pacific, such as Vietnam and Japan. Furthermore, increasing focus of major vendors on developing subscription-based models to cater to the needs of the market is also driving the market growth.

North America among regions is anticipated to witness a strong share in the global maritime security market over the forecast period. Maritime safety services and solutions are highly effective in many of the verticals and organizations. This is owing to rise in deed for providing advanced and superior technology for the purpose of detecting different hazards as well as communication with all the officials in the maritime sector. According to the U.S. Department of Transportation data, the maritime trade in the United States was more than 40% of the overall international freight trade. Thus, the demand for maritime security solutions is high in the region, which in turn is driving the market growth.

Asia Pacific is also expected to show strong growth in the global maritime security market during the forecast period. This growth is attributed to increased adoption of maritime safety services and solutions, and high rate of maritime trade in the region. According to the UNCTAD Review of Maritime Transport 2020, Asia Pacific accounted for 76% of the total maritime trade loaded and unloaded in emerging regions. Thus, the region is likely to witness significant growth in the market in the coming years.

One of the major factors expected to boost the market growth in increase in number of seaports all over the world. Port infrastructure in recent years has become highly important for the global economy and in last few decades there has been a significant expansion in these infrastructures. Due to the rise in cargo movements, the demand for high port capacity will increase in the future, which will then need additional port space. Thus, the seaport number continues to grow around the world. This is further expected to create the need for maritime security services and solutions, which in turn will drive the market growth.

The use of maritime transport has increased in recent times, as the world trade continues to grow. As per the International Maritime Organization (IMO), trade through seas accounts for more than 90% of all the global trade. Thus, due to growing use of maritime transport, there is a growth in activities such as illegal immigration, smuggling of prohibited substances, and attacks on coastal regions and ports. Such situations create strong demand for maritime security services and solutions. Thus, these factors are likely to propel the market growth in the near future.

Increasing demand for global freight around the world is creating opportunities for market players in the global maritime security market. Due to the demand for global freight, the need for better transportation as well as better port infrastructure also increases, which in turn creates the demand for better solutions of maritime security across the globe. Incidentally, technological development in the industry along with their successful integration with preexisting technology is creating several growth opportunities in the market.

Rise in digitalization in maritime sector is also expected to present several growth opportunities in the market. The growing digitalization in maritime is driven by the adoption of cybersecurty, the interoperable collaborative trade process that are set by key shipping ports and lines, international programs and regulations, the emergence of disruptive trade execution platforms, and the Covid-19 leading to paperless trade. These factors are driving the adoption of maritime security solutions and services, which is creating multiple opportunities in the market.

Rise in technological development in port security is a major trend

The emerging technologies in port security are focusing on designing security systems that leverage custom electronics such as multi-sensor cameras for conducting constant surveillance across the port. The adoption of automated and camera-equipped surveillance towers in the coastal regions has increased for enhancing the surveillance capabilities. Moreover, the popularity and importance of sophisticated vessel tracking technologies such as AIS (Automatic Identification Systems) is also growing in maritime sector, however they can be manipulated or spoofed in congested seas, which is why novel satellite technologies may bring advanced security and visibility to the seas.

The use of machine learning for combining satellite data, vessel activities, ship ownership, and more can aid in discerning whenever operation of a vessel is indicating that it could facilitate carrying out business lawfully or evasion of sanctions. Machine learning will help in identifying vessels that could be trafficking people, drugs, or arms, or are engaged in illegal fishing. Thus, market players are focusing on use of machine learning to develop novel technologies that would enhance maritime security solutions and services.

Rise in concerns regarding piracy to hinder the market pace

In past few years, the pirate attacks on vessels have increased, mostly in West African marine routes. However, the routes such as the Indian Ocean and the Gulf of Aden with lower rates of pirate attacks are longer and require more fuel. This additional cost of fuel has to be supported by customers. For this maritime safety has to be intensified in regions with high risk of piracy. At the moment, a global database on maritime piracy is being developed and some of the maritime security solutions and technologies are capable of analyzing piracy networks.

High cost is one of the major factors expected to hinder growth of the global maritime security market over the forecast period. The players functioning in the maritime industry operate under smaller margins of profit, as the shipping rates continue to be under significant pressure. The International Maritime Organization established the International Ship and Port Facility Security Code (ISPS Code) in 2004. These are mandatory security measures aiming enhancement of the security of port facilities and ships. However, there are concerns in the industry regarding the financial and commercial consequences of these measures such as high implementation costs, delays in transportation and route deviations. 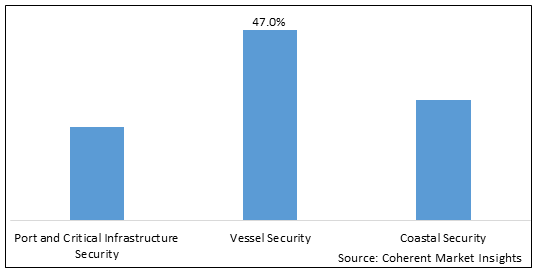 The global maritime security market report is segmented into Technology, Type, and Region.

Based on Technology, the market is segmented into Screening and Scanning, Communications Surveillance and Tracking Detectors, and Other Technologies. Out of which, Screening and Scanning is expected to dominate the global market over the forecast period and this is attributed to the rise technological development leading to growing adoption. Screening and scanning are one of the major elements of maritime security, specifically for seaport security. With increasing technological advancements, novel solutions of screening and scanning are being introduced in the market. This in turn is driving growth of this segment.

Communications segment is also expected to witness significant growth in the near future and this is owing to the demand for communication security solutions in maritime industry. Ports have lot of information demands and needs that if catered can offer optimal operational processes. Such information demands and needs are creating strong demand for communication solutions in maritime industry.

Based on Type, the market is segmented into Port and Critical Infrastructure Security, Vessel Security, and Coastal Surveillance. Out of which, Port and Critical Infrastructure is expected to dominate the global market over the forecast period and this is attributed to the increasing adoption from defense and commercial end-users for safeguarding the ports against a potential infiltration or attack, further creating the demand for advanced security systems at existing as well as new ports.

Vessel Security segment is also expected to witness significant growth in the near future and this is owing to the increase in rate of connected operations between offshore and onshore systems, cyber-attacks that target marine OT systems span in the threat spectrum. Due to this, the demand for vessel security systems is growing in the industry, which in turn is driving growth of the market.

In April 2021, Leonardo Spa, announced the acquisition of 30% stake of GEM Elettronica, a manufacturing company of small and medium-sized 3D radars, inertial systems for navigation, electro-optical sensors, and coastal, maritime, and airport surveillance.

In March 2021, Terma announced that it has opened a new office PT Terma Technologies Indonesia in Indonesia, for pursuing business opportunities in defense, aerospace and security sector.

In November 2020, Bharat Electronics Ltd. entered into an agreement with Terma for providing SCANTER 2001 radars as a part of Phase II of the coastal surveillance system venture for the Indian Coast Guard.

In February 2020, Bharat Electronics added five commands and control centers and 38 radar stations on the coastline for improving the maritime security for the Indian coast guard.

The global maritime security market is highly competitive. This is attributed to continuous launch of new technologies due to ongoing R &D and efforts by value chain participants. Moreover, key players are adopting various business growth strategies in order to expand their presence on regional as well as global basis.

Maritime Security is an industry that focuses on protecting the shipping infrastructure from the various hazards and threats that are posed by the sea. The concept of maritime security is broad and encompasses a variety of threats. These include illegal fishing and pollution. Along with these threats, the oceans also carry a growing threat of human trafficking.

The maritime industry faces numerous threats beyond the natural perils of the sea. These include criminals and illegal immigration. It is essential to be vigilant and implement a proper maritime security strategy. With advances in technology, it is possible to identify weak spots and minimize vulnerabilities.

Maritime security solutions protect shipping and transport enterprises from a range of maritime threats, such as piracy, illegal seaborne immigration, and transnational crimes. These solutions also strengthen traditional relations between countries by protecting their trading relationships with other nations.

However, factors such as increasing criminal activities, and lack of uniform standards for implementing security solutions in maritime industry are likely to impede growth of the global maritime security market during the forecast period.

The rise in count of seaports across the globe and growing terrorism and illegal activities along with increase in territorial threats are fuelling the market.

The type segment is the leading component segment in the market.

Rise in concerns regarding piracy and high costs involved in maritime security systems are the major factors restraining market.