Meperidine belongs to a class of drugs known as opioids, and is an analgesic similar to morphine. Meperidine was originally approved in 1942. Meperidine is available in different dosage forms such as tablets, syrup, oral solution, and injectable solutions. Meperidine is indicated for the management of severe pain which cannot be controlled by alternative treatments due to which opioid medication becomes necessary. Meperidine is legally available under the Controlled Substance Act (CSA) and under the drug class - schedule II drug in the U.S. The substances which have a high potential for abuse and which may lead to severe psychological or physical dependence come under schedule II drug class. 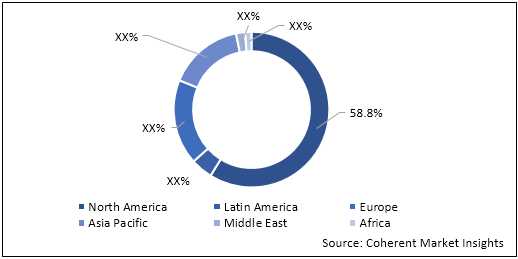 Opioids such as meperidine are used as pre-anesthetic medication in the surgical procedure, and are also used as part of anesthesia to prevent pain after surgical procedure. Opioids are also used in surgical treatment related to cancer. They are also used in cardiovascular procedures to obtain the relief from post-surgical treatment pain. The increasing number of surgeries worldwide is expected to support growth of the market during the forecast period. For instance, according to Eurostat, 2019, there were at least 1.4 million caesarean sections performed in the EU in 2017. Moreover, pain management related to cancer disease, back pain, neuropathic pain, migraine, osteoarthritis, and pain which occurs after the surgical procedures also involves use of opioids such as meperidine. The rising prevalence of such diseases is expected to support global meperidine (Demerol) market growth during the forecast period.

The rising prevalence of conditions such as cancer and other pain related diseases is expected to support global meperidine (Demerol) market growth during the forecast period.

In many disease cases, there is no cure for chronic pain, therefore physicians prefer pharmacological methods to treat the pain and decrease the suffering. The patients suffering from intractable chronic pain, which cannot be managed with conventional treatment methods may require opioid drug therapy, especially for chronic diseases such as cancer. The pain does not stop after the treatment in cancer, and to get relief from this continuous and long lasting pain, patients prefer to use opioid drugs such as meperidine. Thus, the increasing prevalence of diseases such as cancer is expected to support the global meperidine (Demerol) market growth during the forecast period. According to the World Health Organization’s 2018 report, cancer was the second leading cause of morbidity and mortality worldwide and was responsible for an estimated 9.6 million deaths in 2018. According to the same source, globally, around 1 in 6 deaths occur due to cancer annually.

North America is expected to witness significant growth during the forecast period owing to the increasing prevalence of pain causing conditions such as osteoarthritis in the region. For instance, according to the Centers for Disease Control and Prevention’s (CDC) report, osteoarthritis affected more than 30 million U.S adults in 2018, and it has been estimated that 70 million people are likely to suffer from osteoarthritis by 2040.

Asia Pacific is also expected to witness growth in the global meperidine (Demerol) market owing to presence of a vast customer base, and a number of generic manufacturers in the region.

Factors such as increasing drug/opioid addiction, presence of alternative opioid medications, and side effects such as accumulation of toxic metabolite normeperidine, and possible generalized seizures affecting both cerebral hemispheres and loss of consciousness may restrict the global meperidine (Demerol) market growth during the forecast period.

The meperidine is also known as pethidine. It is a synthetic opioid analgesic and used in pain management. It is also used to treat rigors and in post anesthesia-shivers. Several physicians prefer to prescribe meperidine for the treatment of acute and chronic severe pain as it has lesser risk of addiction and is safer than morphine. However, due to the short duration of action, low potency and toxicity of meperidine compared to other opioid analgesics, the preference for meperidine among physicians has reduced in the recent years.

The growing demand for meperidine is associated with its increasing use as an anesthetic in different surgical procedures. According to the World Health Organization (WHO), around 232 million surgeries were reported in 2013, suggesting that the increase in number of surgical procedures is expected to support the growth of meperidine segment in the near future. Moreover, as per the Centers for Disease Control and Prevention (CDC), in 2014, surgical procedures were the second largest contributors in opioid prescriptions and contributed around 37% in total opioid prescriptions in the U.S. These factors are expected to support the global meperidine (Demerol) market growth during the forecast period.

Which segment, based on dosage form, accounted for the highest market share in the market?

The tablets segment held a major market share in 2019 owing to the increasing demand for oral meperidine tablets for pain management.

Which are the key factors driving the growth of the meperidine (Demerol) market?

Major factors driving the growth of global meperidine (Demerol) market during the forecast period are the increasing prevalence of chronic diseases, and the rising number of surgical procedures.

Major factors hampering the growth of the meperidine (Demerol) market during the forecast period are the presence of alternative opioid medication and side effects of meperidine.

Which region is expected to hold the largest market share in the meperidine (Demerol) market?

North America meperidine (Demerol) market is expected to hold the highest share during the forecast period.

Some of the key players operating in the market are Pfizer, Inc., Hikma Pharmaceuticals USA Inc., Epic Pharma, Inc., and Vintage Pharmaceuticals, Inc.

Osteochondromas is a rare disease condition causing non-cancerous bone growth, which is mostly manifested in males and...