Press Release: Global Molded Plastic Market to Surpass US$ 217.6 Billion by 2025, Fuelled by Rising Demand from the Packaging Industry

Global Molded Plastic Market to Surpass US$ 217.6 Billion by 2025, Fuelled by Rising Demand from the Packaging Industry

Molded plastics are the type of polymers, which can be molded into any size and shape for the use in commercial applications. The use of pigments and other additives enhances the quality of the molded plastics. Molded plastics are used in various end-use industries, owing to the characteristics, such as durability, lightweight, and high chemical resistance. The automobile industry uses molded plastic for manufacturing of air flow ducts, engine cover, wheel wells, car fascia, grilles, bumpers, and other components.

Extensive expansion and development in the construction, automotive, and packaging industry will boot growth in molded plastics market globally. For instance, according to Organization Internationale des Constructeurs Automobiles (OICA) the automotive industry increased with a growth rate of 4.5% during the period 2015-2016. Molded plastics are used in manufacturing automobiles that are environmentally sustainable and low-carbon emission vehicles, which are increasingly in demand. The rapid modernization in emerging economies such as India, China, and Brazil has led to increasing expansion of packaging industry owing to high outflow and inflow of fast moving consumer goods, which will in turn boost growth of molded plastic market. Furthermore, electrical and electronic industry has high demand for molded plastics as it is used in the manufacturing of electronic devices such as laptops, televisions, computers, and mobile phones.

In terms of revenue, Asia Pacific is anticipated to be the largest and fastest growing region for molded plastic market witnessing the highest CAGR of 6.7% during the forecast period. The growth of various end-use industries such as packaging, construction, and automobile has surged the demand for molded plastic. Furthermore, growing population and increasing disposable income of the consumers in the emerging economies such as China and India, are major factors responsible for the growth of the molded plastic market in Asia Pacific. In addition, the growth in the electrical and electronic industry in the region is also surging the market positively.

The Indian electronic market is expected to reach US$ 400 billion during the forecast years, mainly due to the setting up of Electronic Hardware Technology parks (EHTP) in the Special Economic Zones that has brought about more Foreign Direct Investments. Government has also initiated the MSIPS (modified special incentive package) under which US$ 1.7 billion will be offered to the electronic sector in 2017.

Europe is the second largest market for molded plastic, followed by North America. The developed electrical and automotive industry is the major factor boosting the growth of molded plastic market. The increase in remodeling and renovating activities in the North American region is further expected to fuel the growth of molded plastic market. The New Building Canada Fund has committed US$ 10 billion over a 10 year period i.e. 2014-24 to build public infrastructure in Canada. 9 US$ in the National and regional projects and 1 US$ in small population fund. 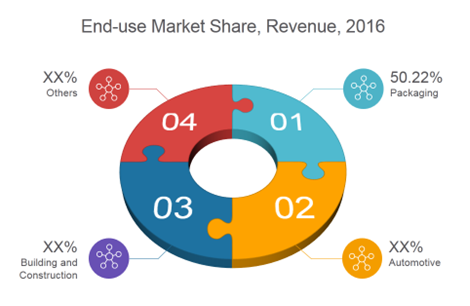 Based on the End-use, packaging is the largest segment in 2016 and is expected to be the same during the forecast years. Packaging holds a revenue of US$ 63830.84 million and is expected to grow at a CAGR of 5.9% from 2017-2025. Packaging industry accounted for the largest market share due to the increased use of light weight packaging in various industries, such as pharmaceuticals, electrical, and electronics.

The process of using a rigid frame or mold for shaping of plastic is called plastic molding. The mold used in the process gives the desired shape and is made of steel or aluminum. Plastic molding helps in creation of objects of all size and shape using both simple and complex designs.

Asia Pacific was the largest market for injection molding in 2016 and is expected to retain its dominance during the forecast period. The high demand from the various end-use industries, such as packaging, building and construction, and automobile is expected to result in increasing demand for molded plastic market. Moreover, the plastic injection molding process yields higher production in considerably less time with minimal production waste, hence, further boosting the growth of global molded plastic market.

What are the growth estimates for molded plastic market till 2025?

The global molded plastic market is estimated to reach US$ 217.6 Billion by 2025.

Which are the prominent molded plastic market players across the globe?

Which segment based on end-use industry, accounted for the highest demand in the molded plastic market?

Among end-use industry, packaging segment is expected to hold dominant position in the market during the forecast period.

What are the key factors driving growth of the molded plastic market?

Extensive expansion and development in the construction, automotive, and packaging industry is one of the major factors that is expected to propel growth of the market over the forecast period.

What is the Compound Annual Growth Rate (CAGR) of the molded plastic market for next 8 years?

The global molded plastic market is estimated to exhibit a CAGR of 6.1% over the forecast period.

Which region is dominating the molded plastic market growth?

Among regions, Asia Pacific is estimated to hold dominant position in the market over the forecast period.

Stearates are esters of fatty acids. They are widely used as additives due to their lubricating property. It...

Us plastic to fuel market analysis

Plastic-to-fuel is an advanced technology used to convert plastic waste into liquid fuels in order to delive...