Offshore Patrol Vessels Market to Surpass US$ 18.8 Billion by 2027

The offshore patrol vessels are mainly designed to perform surveillance operations in the exclusive economic zone (EEZs) and other operational tasks such as protection of shipping lanes, anti-piracy patrols, and coastal security. Furthermore, naval offshore patrol vessel chartering services are introduced for the protection of the exclusive economic zone (EEZ) against maritime criminality, piracy, marine pollution, and human and weapons or drugs trafficking. The naval offshore patrol vessels (NOPVs) are patrol ships that are armed with super rapid gun mount (SRGM) system along with AK-630M guns that offer medium and short range defensive capabilities. The armament is remotely controlled through an electronic Fire control system. Moreover, the patrol ships are fitted with diesel engine driven propulsion systems that offers high speed and the ship operations are controlled by an intelligent platform management system, which has interfaces for all operational activities. For instance, in May 2018, The Indian Navy deployed offshore patrol vessels Sumedha, for joint surveillance of exclusive economic zone (EEZs) for Maldives.

Among sizes, the segment 50m to 90m is expected to witness highest growth during the forecast period. The segment was valued at US$ 4,397.51 Mn in 2017 and is expected to reach US$ 6,396.99 by 2027 at a CAGR of 3.9% over the forecast period. These ships have length from 50 meter to 90 meter and are mainly used for coast guarding, surveillance, and defense activities. They are also used for policing operations, rescue operations, embarkation & operation of ALH helicopter for long range all time search, and pollution response against oil spillage and external fire-fighting among others. Such vessels are used in navy operations. For instance, River-class patrol vessels are primarily built for the Royal Navy of the U.K. with length ranging from 79.5 meters to 90.5 meters. Moreover, the Arafura class are multi-purpose, warship class ships in the Royal Australian Navy has length measuring from 80 meters. This ship will be used offshore and littoral patrol, mine warfare, anti-terrorism and anti-piracy operations, border protection, and hydrographic survey. BAE Systems is one of the renowned builders of 90 meter offshore patrol vessels and is currently working for five 90 m offshore patrol vessels for the second batch of the British Royal Navy’s River-class. 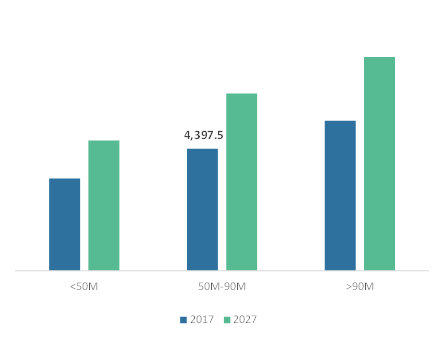 The novel design and advancements in technology has revolutionized the 50M to 90M class of patrol vessels. The newer versions are more versatile, have better flexible designs, and deliver more efficient operations. Patrol vessel with length 90 meter can occupy around 60 personnel and can carry up to 50 embarked troops or passengers. These have enhance flight deck to operate helicopters and have advanced infrastructure including virtual technologies to integrate weapons, management systems, sensors, and other detailed systems for complex warships. For instance, BAE Systems’ River-class vessel offers similar features with inclusion of advanced CMS-1 combat system to provide tactical picture compilation, planning, situational awareness, decision making, and control of weapons from its intuitive consoles in littoral operations. The combat system also assists the North Atlantic Treaty Organization (NATO) and other coalition missions. BAE Systems’ 90meter offshore vessel is equipped with an air surveillance radar, which can be used to detect low-flying aircrafts (which are used for smuggling operations). It has 30 mm small caliber gun system equipped with it, which can engage speedy inshore attack craft armed with short-range missiles, machine guns or explosives, rockets, and rocket-propelled grenades. It features 20 meters long flight deck and can land as well as fuel a medium-size helicopter weighing up to 7 tons.

Demand for such vessels has witnessed consistent growth, owing to their capabilities, operational efficiency, and advanced features installed in them. For instance, as per Coherent Market Insights, Indian Government ordered 16 new 55 meters ASW patrol ships in 2015. Moreover, in January 2019, the Armed Forces of Malta signed a contract worth around US$ 40 Mn with Italy-based shipbuilder, Cantiere Navale Vittoria, for the construction of a second purpose-built offshore patrol vessel, which will be used in patrolling Malta’s territorial waters. The ship measures around 74.8 meters in length and can reach the speed of around 20 knots.

An offshore patrol vessel is a vessel generally designed for coastal monitoring or defense duties. These types of vessels are available in various designs and shapes. They are mainly operated by navy, police force, coast guards, or other organizations who are actively working for marine environments. These vessels are mainly used in various boarder protection activities such as anti-piracy, anti-smuggling, fisheries patrolling, rescue operations, surveillance, and immigration law enforcement.

Patrol vessels are used mainly for detecting drug trafficking, smuggling, and monitoring and controlling marine pollution. For instance, in September 2018, the U.S. CBP and Air and Marine Operations (AMO) aircrews along with inter-agency partners seized a vessel with around 2,880 pounds of cocaine and detained drug smugglers on the coast of Acapulco, Mexico. Therefore, increasing focus on coastal security is leading to high demand for offshore patrol vessels, thereby boosting the market growth over the forecast period.

What are the growth estimates for offshore patrol vessels market till 2027?

The global offshore patrol vessels market is estimated to surpass US$ 18.8 Billion by 2027.

Which are the prominent offshore patrol vessels market players across the globe?

Which segment based on sizes, accounted for the highest demand in theoffshore patrol vessels market?

Among sizes, 50m to 90msegment is expected to witness highest growth during the forecast period.

What are the key factors driving growth of the offshore patrol vessels market?

Increasing investments and exploration activities in offshore oil and gas sector is one of the major factors that is expected to propel growth of the market over the forecast period.

What is the compound annual growth rate (CAGR) of the offshore patrol vessels market for next 8 years?

The global offshore patrol vessels market is estimated to exhibit a CAGR of 3.8% over the forecast period.

Which region is dominating the offshore patrol vessels market growth?

Among regions, Asia Pacific is expected to hold dominant position in the offshore patrol vessels market during the forecast period.