The global probiotic ingredients market size was valued at USD 4963.5 million in 2021 and is anticipated to witness a compound annual growth rate (CAGR) of 4.4% from 2022 to 2030. Growing health concerns and awareness about preventive healthcare has led to the growth of probiotics ingredients market. Probiotics are live bacteria that are capable of restoring the balance of the human body. They are also effective in relieving stress, blood pressure and digestive problems. They are also used as a safe alternative to harsh pharmaceutical treatments. This has led to an increase in demand for probiotic ingredients in the food and beverage industry. The growth of this segment is expected to continue over the forecast period. In addition, high consumption of sauerkraut, functional foods and beverages, and dairy products is also expected to boost the growth of the probiotic ingredients market.

Regionally, Asia Pacific is expected to dominate the global probiotic ingredients market over the forecast period. The growth is attributed to increased consumer awareness about preventive health and rising living standards. In addition, manufacturers are also expanding their manufacturing facilities in the region to meet growing consumer demand. Furthermore, manufacturers are developing proprietary strains of probiotics for specific applications. This will open up new avenues for the probiotic ingredients market in the region.

Europe is also expected to witness fastest growth in the probiotics ingredients market over the forecast period. The region has the potential to expand further over the forecast period due to the high visibility of probiotic-fortified food products in retail stores. In addition, the increasing awareness about the benefits of probiotics ingredients and the growing focus on preventive health are expected to drive the market growth. 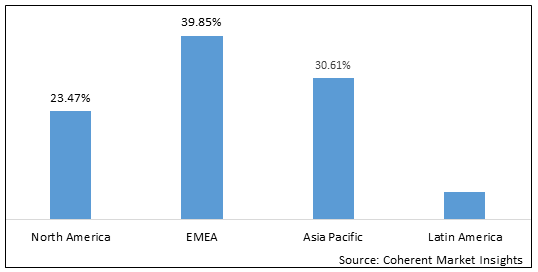 Growing awareness regarding the preventive healthcare products among consumers is primarily fueling the growth of the global probiotic ingredients market. For instance, the United States, between 60 and 70 million people are affected by digestive diseases, according to the National Digestive Diseases Information Clearinghouse (NDDIC), a service of the National Institute of Health (NIH). An additional 60 million people experience chronic constipation, while 20% endure symptoms associated with reflux (indigestion) at least weekly.

Increasing demand for fortified animal feed and pet food is again expected to drive growth of the market. The United Nations Food and Agriculture Organization (FAO) estimates that by 2050 the demand for food will grow by 60% and the production of animal proteins is expected to grow by around 1.7% per year between 2010 and 2050, with meat production projected to rise by nearly 70%, aquaculture by 90%, and dairy by 55%. If the growth rates of the last 40 years were extrapolated forward to 2050, this would, in theory, quadruple the needs.

Advancement in the field of probiotic ingredients such as Nano encapsulated probiotics is projected to create enormous opportunities for players active in the market. Moreover, major players in the market invest heavily in R&D activities which is again fostering market growth. For instance, in July 2019, DuPont announced the opening of a new state-of-the-art probiotic fermentation unit at its facility in Rochester, New York. The company invested an overall USD 100 million to expand probiotics capacity. The facility now produces high-quality probiotics for various industries, including the feed industry.

Ban on antibiotic ingredient in feed is expected to hold potential opportunities for players. The European Union (EU) placed a total ban on the application of antibiotics as feed additives in 2006. The change in the consumer’s demand for safe food production, coupled with regulatory issues on the ban of antibiotic growth promoters (AGP), triggered the research for natural strategies to modulate gut development and health. Due to this, there was high adoption of alternatives, such as probiotics in animal feed, especially in cattle feed, as it offers beneficial results in digestion, and the immune system.

Powdered ingredients are gaining popularity across developing regions. This ongoing trend is projected to uplift the market growth positively. Capsules are an easy-to-open alternative, compared to sticks and sachets. The probiotic powder capsule can be easily opened and sprinkled onto food. Moreover, capsules minimizes both the number of excipients required and the amount of packaging used for the product.

Key players are entering into new market across developing region is a growing trend. For instance, in Israel-based supplements manufacturer, Anlit, introduced its Long-Life Probiotic (LLP), Immune probiotics, Zinc and Elderberry (Sambuca nigris) bites. These are all-natural immunity-support gummies shaped as cubes and bears. All three products are market-ready for adoption into customized functional formulations.

Strict regulations and labelling standard for probiotics is expected to hamper the market growth. For instance, in the European Union, probiotics and feed supplements are regulated by the European Food Safety Authority (EFSA), while in the United States, most probiotic products are regulated by the Center for Veterinary Medicine (CVM) and the US Food and Drug Administration (FDA). Probiotic supplements in Australia are regulated under the “Therapeutic Goods Act”, which controls the health claims under a centralized registry.

High cost of probiotic is another major factor expected to restrict the market growth. For instance, per kilogram of probiotic feed additive is accounted to be around USD 4.73, which is relatively higher than the prices accounted for control feed supplements, prebiotics, and symbiotics, which cost nearly USD 4.16, USD 3.87, and USD 4.21, respectively. 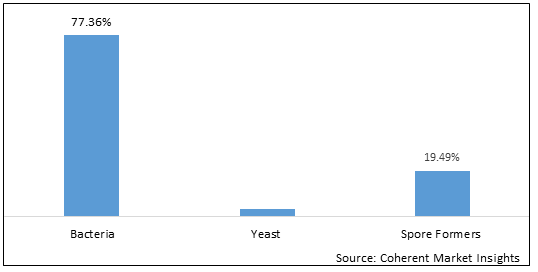 The global probiotic ingredients market report is segmented into type, application, and geography

Based on type, the market is segmented into Bacteria, Yeast, and Spore Formers. Out of which, Bacteria is expected to dominate the global market over the forecast period and this is attributed to the fact that these bacteria have greater level of control in their production plant, hence allowing food manufacturer to use bacteria in various food category. The bacteria segment of the global probiotics ingredient market was valued at USD 3,839.9 million in 2021, and it is projected to reach USD 4,790.6 million in 2027, registering a CAGR of 3.90% during the forecast period.

Yeast segment is also expected to witness significant growth in the near future and this is owing to the growing awareness regarding the health benefits of adding yeast in food products. The European Association for Specialty Yeast Products (EURASYP) has taken significant initiatives to raise awareness regarding the yeast extract in the food industry. The yeast segment of the global probiotics ingredient market was valued at USD 156.2 million in 2021, and it is projected to reach USD 236.5 million in 2027, registering a CAGR of 7.27% during the forecast period.             .

Based on application, the market is segmented into Food and Beverage, Dietary Supplements, and Animal Feed. Out of which, Food and Beverage is expected to dominate the global market over the forecast period and this is attributed to the growing awareness regarding the health benefits of yogurt based food products. For instance, in 2020, Stonyfield Organic launched Daily Probiotics, a probiotic yogurt drink in a 3.1oz easy-to-drink format, which contains three major probiotic strains: Lactobacillus acidophilus, Bifidus, and Lactobacillus casei, designed to support immune and digestive health

Dietary Supplements segment is also expected to witness significant growth in the near future and this is owing to the growing aging population which is increasing prevalence of chronic disease.

In February 2021, Kerry Group Inc. announced plans to acquire the Spanish company Biosearch Life. Based in Granada, Spain, BioSearch Life is active in the nutraceutical and functional food sectors. The company has a range of probiotics, including premium probiotics obtained from human breast milk and natural omega-3.

In May 2021, Chr. Hansen has launched The Probiotics Institute™, a new platform providing educational and scientific content on probiotics and the human microbiome.

In April 2020, Chr. Hansen launched a new solution to support dairy and beef cattle health and performance, Bovacillus™ which is a versatile probiotic that can be used in all types of feed applications.

In February 2022, Royal DSM, a global, purpose-led, science-based company active in Nutrition, Health, and Sustainable Living, announced that it has bolstered its capabilities as an end-to-end partner for North American customers in the gut health space.

In October 2020, Royal DSM, announced the completion of its acquisition of Erber Group for an enterprise value of EUR 980 million. DSM acquired Erber Group’s Biomin and Romer Labs.

*Definition: Often referred to as "good bacteria," probiotics are a group of microorganisms that support a healthy digestive system. These organisms are found in foods, dietary supplements, and beauty products. They are important for proper digestion and can help with skin health. They are also used to fight against disease-causing cells. Probiotics are used to improve gastrointestinal health and are often found in yogurt, but are also available as dietary supplements. Some of these supplements contain a variety of strains, and should be used in conjunction with other probiotic foods to maximize the health benefits.

Probiotics ingredients are used to improve the immune system of the body. This results in the reduction of the number of cases of diseases. In addition, it helps in restoring the balance in the digestive tract. It also helps in the reduction of the inflammation in the intestine. It is used in all types of F&B segments, including snacks and bars. It is also used in personal care products and breakfast solutions.

On the other hand, stringent regulations and labelling standards for probiotics is expected to restrict the market growth.

Growing awareness regarding the preventive healthcare products and increasing demand for fortified animal feed and pet food are fuelling the market.

The Bacteria segment is the leading component segment in the market.

Strict regulations and labelling standard for probiotics and high cost of probiotic are the major factors restraining the market.