Global Sinus Dilation Devices Market to Surpass US$ 5.7 Billion by 2026

Sinus dilation devices play a major role in modern healthcare, allowing the sinus openings to expand during nasal sinusitis and are preferred over antibiotics, decongestants, or steroids, as it provides long-lasting and immediate results. 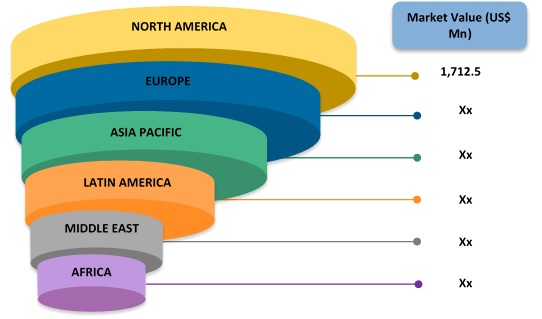 Furthermore, according to the study published in the U.S. National Library of Medicine, up to 64% of the patients suffering from acquired immune deficiency syndrome (AIDS) have possibility to develop chronic sinusitis in their course of life.

However, complications such as excessive and prolonged bleeding, post-surgical infections, which can be life threatening such as Methicillin-Resistant Staphylococcus Aureus (MRSA), and rare complications such as cerebrospinal fluid rhinorrhea are expected to limit adoption of sinus dilation devices, thereby hindering the market growth.

A study conducted by American Journal of Rhinology & Allergy in 2014, suggested that the complication rate for balloon sinuoplasty (BSP) was 5.26% and it was 7.35% for conventional functional endoscopic sinus surgery (FESS). Major complications associated with the endoscopic surgeries are due to balloon sinuplasty

North America holds dominant position in the global sinus dilation devices market, owing to high availability of sinus dilation devices in medical settings. Medications such as antibiotics and topical steroids help to open up blocked sinus passages and relieve symptoms. However, these medicines serve as short-term relive and do not fix the condition permanently, therefore, many people in the U.S. are adopting surgical methods for the treatment of this condition. According to the research published in the National Center for Biotechnology Information (NCBI), over 600,000 ambulatory sinonasal cases are performed each year in the U.S.

Sinusitis is an inflammation of sinus, which causes nose blockage and avoids mucus drainage. Sinus dilation devices are used in patients with nose drainage issues related to nasal sinusitis or sinuses to expand the sinus openings. Different types of sinus dilation devices can be utilized for patients according to the need of the treatment, which includes balloon sinuplasty systems, rhinoscopes, sinus stents, and functional endoscopic sinus surgery (FESS), and instruments set for sinuses or sinusitis. During balloon sinus dilation procedure, doctor reshapes the patient's sinus pathway with inflated balloons to open the blocked sinus or nasal pathway. Sinus dilation procedures are generally preferred over antibiotics, decongestants, or steroids, as it provides long-lasting and immediate results.

Factors driving the sinus dilation devices market are increasing prevalence of chronic sinusitis, growing preference for minimally invasive surgeries, and favorable reimbursement scenario of surgical treatments for hospital outpatient department. According to the Centers for Disease Control and Prevention (CDC), in 2016, around 26.7 million adults in the U.S. were diagnosed with chronic sinusitis. According to National Center for Biotechnology Information (NCBI), over 600,000 ambulatory sinonasal cases are performed each year in the U.S.  Centers for Medicare Services (CMS) reassigned the nasal/sinus endoscopy codes, for instance, sphenoid balloon dilation (31297) and maxillary FESS procedures (31267) were reassigned to higher paying Ambulatory Payment Classifications (APCs). This resulted in a significant payment increase of 52.6%, which increased reimbursed cost of both the endoscopic sinus surgeries from US$ 2,009 in 2015 to US$ 3,066 in 2016.

Furthermore, increasing number of product launches and FDA approvals are expected to drive the market growth.

What are the growth estimates for sinus dilation devices market till 2026?

The global sinus dilation devices market is estimated to surpass US$ 5.7 Billion by 2026.

Which are the prominent sinus dilation devices market players across the globe?

What are the key factors hampering growth of the sinus dilation devices market?

Complications associated with sinus dilation devices such as excessive and prolonged bleeding, and post-surgical infections is one of the major factors that is expected to hamper growth of the market over the forecast period.

What are the key factors driving growth of the sinus dilation devices market?

Increasing prevalence of chronic sinusitis is one of the major factors that is expected to propel growth of the market over the forecast period.

What is the compound annual growth rate (CAGR) of the sinus dilation devices market for next 8 years?

The global sinus dilation devices market is estimated to exhibit a CAGR of 8.4% over the forecast period (2018-2026).

Which segment based on product type, accounted for the highest demand in the sinus dilation devices market?

Light therapy involves the use of natural light or any form of equivalent light for the treatment of certain...

Visual impairment can be any kind of vision loss, whether it is the condition in which someone cannot see at...

Bone tumors develop, when cells within a bone divide uncontrollably, forming a lump or mass of abnormal tiss...