A smart TV is an internet-connected television with a wide range of online features, such as on-demand content from various apps, access to streaming services such as Amazon Prime, Netflix, and the ability to connect with several other wireless devices such as smartphones and tablets. Moreover, companies operating in the global smart TV market are focusing on implementing various strategies such as collaborations and partnerships with other manufacturers to expand their manufacturing facilities globally to maintain their global presence. For instance, in 2020, LG Electronics, a South Korea based electronics company launched eight LG OLED models with two new series, which includes  77 and 65-inch class and Real 8K 88- inch ZX series. All these factors are projected to contribute to market growth in the near future.

The global smart TV market is expected to witness significant growth during the forecast period (2021–2028). Growing demand for high-definition (HD) channels and video on demand (VOD) is expected to drive growth of the global smart TV market during the forecast period. This is attributed to its features such as improved image quality, high resolution, extensive color change will provide lucrative opportunities for the market players. Since there is an increased demand for HD content globally, smart TV providers are enhancing their HD offerings, in order to increase their market presence. For instance, in April 2021, Xiaomi, a China based electronics company announced its plan to launch a new smart TV known as Mi QLED TV with 4K resolution in India in order to expand its business in the market. Furthermore, producers and telecasters are also focusing on making investments in Ultra-High Definition (UHD) resolution technology due to improvements in camera technology. Moreover, proficient film producers are shifting their preference towards Ultra-High Definition (UHD) by utilizing UHD cameras and camcorders. Furthermore, due to rise in viewing experience, the demand for 4K UHD smart TVs have increased in various commercial applications such as hospitality, hotels, and educational institutions which would further play a significant role in driving the demand for smart TVs in the near future. For instance, according to Coherent Market Insight analysis, the paid subscribers of Netflix have reached 203.3 million in 2020 from 167.1 million in 2019 worldwide.

COVID-19 has significantly disrupted almost all the industries including infrastructure, transportation, oil and gas, manufacturing, and others. To combat COVID-19 pandemic, most of the countries had implemented lockdown restrictions, which are now being eased slowly on phase-wise and industry-wise basis. However, most of the people are staying at home and following social distancing in order to contain spread of COVID-19. As people are staying at home and curious to know more updates on Coronavirus has increased the demand for the news channel. For instance, in April 2020, according to Broadcast Audience Research Council (BARC), total TV viewership increased to 21% from 7%, as most of the people watched news channel to get updates of the COVID-19. Streaming service providers such as Netflix, Amazon Prime Video, and Zee5 are used by people for entertainment and  are fueling the demand for smart TVs in the market. Due to the rising demand for high network connectivity increases the demand for smart TV in the market. The COVID-19 has also increased the demand for video on demand and over the top services, which ultimately increases the demand for smart TVs in the market. For instance, according to Coherent Market Insight analysis, global video streaming market has reached US$ 50.1 billion in 2020 and is expected to reach US$ 224.2 billion in 2028 with a CAGR of 21.1% during the forecast period.

North America is expected to hold dominant position in the global smart TV market during the forecast period.

North America held dominant position in the global smart TV market in 2020, accounting for 43.2% share in terms of value, followed by Asia Pacific and Europe. 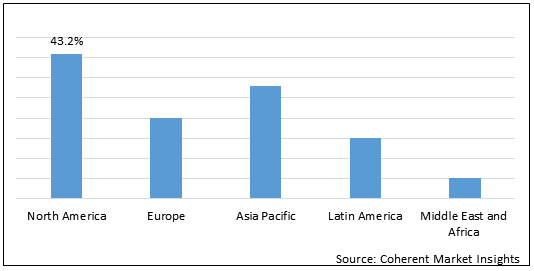 Among regions, North America held dominant position in the global smart TV market in 2020 and is expected to retain its dominance throughout the forecast period. The rapid technological advancements, large number of smart home product and service providers in the region are expected to drive the North America market growth during the forecast period. For instance, according to the Coherent Market Insights analysis, there were 288.1 million internet users in the U.S. in 2020. Additionally, according to the Coherent Market Insights analysis, in the U.S., in 2016, the installed base Internet of Things (IoT) devices in households was 228 million and increased to 240 million in 2017.

Asia Pacific is also expected to exhibit significant growth during the forecast period. The rising adoption of IoT, increasing penetration of smartphones, rapid urbanization, and increasing demand for wireless technology devices that consume less power are expected to drive the Asia Pacific market growth during the forecast period. For instance, according to the Coherent Market Insights analysis, in 2019, approximately 75.2% of the population is using smartphones in Japan.

46 to 50 inches screen size segment is expected to drive the market growth during the forecast period.

Among screen size, 46 to 50 inches screen size segment is expected to hold dominant position in the global smart TV market during the forecast period. Most of the customers recommend 4K UHD display technology for larger TV sets. The increasing purchasing power of consumers has further increased the demand for smart TVs in the market. Furthermore, increase in consumer income and price trends for UHD televisions are also expected to boost growth in the 46-55 inch screen size segment during the forecast period. Moreover, according to the U.S. Bureau of Economic Analysis (BEA), disposable personal income in the U.S. increased to US$ 16,706.40 billion in December 2019 from US$ 16,675.80 billion in November 2019. 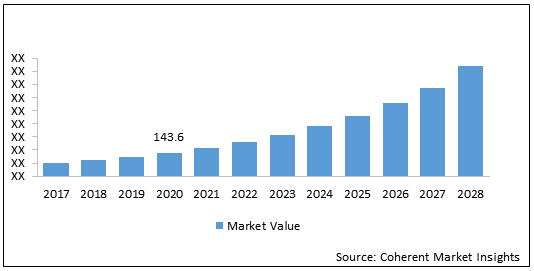 Smart TV also known as connected TV is a digital television with integrated internet and interactive smart features. Smart TV is a combination of computer and social TV which allows users to use all the features of smartphones or computers on these smart TVs. In addition to this, smart TVs consists hardware and connections along with a TV operating system (OS) and a graphical user interface (GUI). Moreover, smart TVs come up with both Ethernet connection and built-in Wi-Fi which eradicates the need for a separate set-top box (STB) in the market. Smart TVs provide several functions such as web browsing, video-on-demand (VOD), and video streaming from services such as YouTube & Netflix which increases the demand for smart TVs in the market.

Rapid technological advancements along with the digital transformation of the broadcasting industry are the major factors propelling the market growth during the forecast period. The rise in adoption of internet of things (IoT) has increased the demand of smart connected devices which uses UHD (ultra-high-definition) screens. For instance, according to Coherent Market Insight analysis, the number of IoT-connected devices is expected to reach 37.5 billion by 2028 from 11.2 billion in 2020 worldwide. The UHD TVs with 4k resolution deliver superior definition images, and availability in large screen sizes of more than 50 inches have created the lucrative opportunities for the market growth. For instance, in July, 2020,  Shinco, a China based company which manufacturer air conditioner/heat pumps, TVs, DVD-Players, GPS, and washing machines has launched latest television, the S43UQLS 43-inch 4K HDR LED Smart TV in India. This smart TV consist purpose-built interface known as Uniwall UI which supports the official versions of a number of popular apps and streaming services includes Hotstar, Zee5, Sony Liv, Jio Cinema, and Alt Balaji. Thus, in turn, increases the demand of smart TVs in the market.

The increasing demand for video on demand (VOD) and over the top (OTT) services is expected to drive growth of the market during the forecast period.

Based on resolution type, which segment held the largest market share in the market in 2020?