Global Synthetic Aperture Radar In Space Sector Market to Surpass US$ 1.71 Billion by 2025

The global synthetic aperture radar in space sector market was valued at US$ 600.6 Mn in 2016 and is expected to be pegged at US$ 1,714.0 Mn by 2025, registering a CAGR of 12.50% over the forecast period. Increasing requirement of environment monitoring, public safety, and natural resource exploration is major factor fueling growth of the industry.

Adoption for advanced technologies in space sector is fueling situational awareness, owing to factors such as government initiatives toward disaster management, increasing need for cyber security, public safety, and smart infrastructure management. For instance, in December 2005, Indian government took initiative towards disaster management by enacting the Disaster Management Act, 2005, which envisioned the creation of the National Disaster Management Authority (NDMA). The objective of this act is to build a safe and disaster resilient country by developing a holistic, proactive, multi-disaster oriented and technology driven strategy through a culture of prevention, mitigation, preparedness, and response.

Situation awareness is a model of decision making by observing, understanding, and forecasting scenarios. The arena of situation awareness consist of various products, components, and technologies to improve the perception of environmental factors within a specific space and time. Also, it aims in providing information associated with the location of critical assets, along with the state, location, and status of potential threats facing such assets. The key solutions available in the situation awareness systems include human-machine interface (HMI), physical security information management, fire and flood alarm systems, and access control. These solutions have potential application in disaster response, bio-surveillance, smart infrastructure management, and environmental impact tracing.

Synthetic Aperture Radar (SAR) systems are very important for the Earth Observation (EO) business. Synthetic aperture radar satellites system are typically more expensive to develop, and despite distinct advantages, the images are more complex, raising processing costs. Conventional synthetic aperture radars can balance tens of thousands of pounds and as large as a school bus. This are additionally responsible for providing significant capabilities for remote sensing, communication and science, but this costs hundreds of millions of dollars per satellite and may require years to build and launch.  Owing to this huge investment required to construct, promotion and operation is expected to restraint the growth of the global synthetic aperture radar market during forecast period.

Among the frequency band segment, single-frequency band accounted for the largest share of 84.73% in the global SAR in space sector market in 2016. This growth is attributed to the growing requirement of the data generated by SARs for various defense, research, and commercial applications, including natural resource exploration and tracking ship movements in areas with bad weather conditions. According to Coherent Market Insights analysis, ongoing marine trade relations between Canada and North of Russia are highly prone to extreme weather conditions and icebergs, which in turn propels demand for technologies ensuring safety of the ships and commodities necessitating the requirement of SARs.

Among application segment defense application is expected to witness a CAGR of 11.43% over the forecast period. This growth is attributed to the growing requirement of the data generated by SARs for various defense applications that include surveillance, reconnaissance, and environmental monitoring in areas with bad weather conditions. 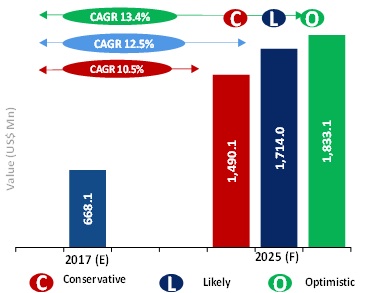 North America accounted for the largest market share in 2016

On the basis of geography, global SAR in space sector market is segmented into North America, Europe, Asia Pacific, Middle East, and Africa. The market in North America accounted largest share in global SAR market for space sector application. The North America SAR market in Space Sector was valued at about US$ 246.3 million in 2016. The U.S. and Canada are the major economies driving the market of SAR in space sector in North America region, prominently owing to the growing number of SAR constellation deployments in space. Chief instances of ongoing developments in this industry include the Capella (U.S.), OptiSAR (Canada), Radarsat (Canada), and SMAP (U.S.) projects. Furthermore, requirement of SAR imagery in commercial application for environmental monitoring specifically to monitor the ships and sea trade in North Atlantic Ocean and parts of Arctic Ocean are expected to provide key growth opportunities to the SAR in space sector market.

Synthetic aperture radar in space sector market refers to the space and ground-based SARs that function on the principle of transmission and reception of the reflected signals, which interact with the ground and aid in the imaging, tracking, detection, and characterization. SAR finds significant applications over the conventional electro optical (EO) imaging systems, primarily owing to microwaves being able to penetrate through clouds and provide consistent weather data efficiently for 24 hours.

Increasing participation of emerging economies in space industry is key factor driving growth of the market. According to Coherent Market Insights, global spending in space programs has escalated over US$ 60 billion in 2016 from around US$ 44 billion in 2014. Some of the major economies in the global space industry include the U.S., Germany, France, the U.K., Italy, Russia, China, Japan, India, South Korea, and Brazil. All these economies invest around or over US$ 500 million annually. Multi-satellite constellation programs, advent of commercial applications that include the environmental monitoring, disaster management, natural resource exploration are projected to witness strong growth demand over the forecast period. For instance, Capella program in North America, Iceye X projects in Finland, Constellation of Small Satellites for Mediterranean basin observation (COSMO-SkyMed) in Italy, OptiSAR Radar constellation in Canada are among the major earth observation projects that are expected to fuel the overall growth of the SAR in space sector market over the forecast period.

*Browse all the market data tables and figures on "Synthetic Aperture Radar In Space Sector Market- Global forecast to 2025”.