The global autonomous tractor market size was valued at USD 818.4 million in 2021 and is anticipated to witness a compound annual growth rate (CAGR) of 23.5% from 2022 to 2030. The market is to propel the market as Farm labor shortage and decreasing arable land and the enhanced benefits of autonomous tractors over increasing food security. Slow penetration and adoption rate anticipated to hinder the market growth. Based on the segment the market is divided by horsepower, by automation and geography.

Germany advocated decent growth in precision farming and smart agricultural practices during the past few years. These reasons are fueling the sales of autonomous tractors in the country and are anticipated to boost them further during the forecast period. 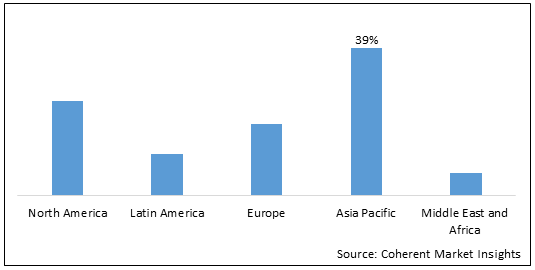 Farm labor absence and reducing arable land is anticipated to augment the growth of the global autonomous tractor market. As per the International Labor Organization, in the United States, 28.81% of human resources involved in agriculture were skilled. This decreased to 28.40% in 2017, which further reduced to 28.26% in 2018. As technologically helped agriculture necessity skilled laborers that are at an acute absence of accessibility, farmers are acquiring machineries such as autonomous tractors that can be productive, regarding the present challenge.

The decreasing arable land and the increasing global population are among the major reasons driving the market. According to the World Bank, the area of arable land per person decreased from 0.20 hectares in 2011 to 0.18 hectares in 2018. This pushed growers to increase their productivity per hectare of land available to meet the growing demand for food.

Agricultural system all across the globe has undergone alterations in terms of cropping system, type of power sources utilized, and application of inputs orderly to achieve a huge level of productivity. Manual labor and conventional agricultural executes are marginally less productive than autonomous tractors. This is further driving the market for autonomous tractors globally.

China, being an agro-based country, is anticipated to advocate the fastest development in the future. The development in the country is driven by factors such as large landholdings, shortage of labor, time, and efficacy constraint. In Addition, the rising geriatric populace in the region and the urge of the Chinese government to introduce totally automated farms are pushing agricultural machinery producers to grow autonomous/driverless tractors in the future. This is anticipated to boost the growth of the global autonomous tractor market.

Land fragmentation has led to low minimal farm acreage, especially in rising countries. This is anticipated to negatively impact the need for autonomous tractors in the global market in the coming years. Temporarily, owing to the fragmentation of lands, the count of landholdings has gone up, which further is rising the need for various variety of tractors, comprising autonomous tractors suitable for various farming practices such as tillage, planting & transplanting, and harvesting of crops.

Technological developments such as autonomous tractors are assisting the goal of achieving more resilient, productive, and sustainable agriculture and food systems to meet end user requirements are rising in recent years.

As per the survey done by the Department of Agricultural Economics and Agribusiness, Louisiana State University, and LSU Ag Center, the shortage of technical skills is the factor behind the slow penetration and acquirement rate of autonomous tractors in agriculture. Huge price, inadequate time to acquire, and shortage of technical skills responsible for 10.11% of the non-adoption of the technology.

Even though the strength of smart farming technologies such as autonomous tractors in agriculture is very huge, the progress and penetration of such machineries in agriculture have been relatively slow over many regions.  Automation tools such as autonomous tractors need massive capital expenditure to build, and hence, needs huge skilled labor to function and regulate it over time, both of which are in short supply at most of the local farms. 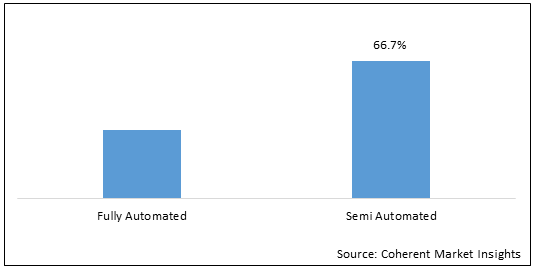 The global autonomous tractor market report is segmented by Horsepower, by automation and geography.

Based on Horsepower the segment is divided into, up to 30 HP, 31 to 100 HP and Above 100 HP. Out of which the 30 HP These autonomous tractors are less in size, with a mass below 4,000 lbs and utilize below 30 HP to run the attachments. Invariably, all these high-production, economical, and user-friendly compact tractors are being utilized by schools, parks, landscapers, cemeteries, and hobby farmers.

In 100 HP, Compact utility autonomous tractors are being rousingly acquired by medium-scale farmers as they are much more minimal in size than the average agricultural tractors and are priced on comparison with very less.

Based on automation the market segmented into fully automated and semi-automated. Autonomous tractors allow the farmers to totally automate their operations while permitting precise control of work and effective usage of farm tools. The need for driverless tractors is rising with the application of technologies in modern farming practices. These are some of the reasons responsible for growth of the market.

The semi-automated tractor market was evaluated at USD 542.6 million in 2021 and is anticipated to reach a value of USD 2,056.3 million by 2027, advocating a CAGR of 25.9% over the predicted duration. As the farming sector is increasing, farmers over nations are focusing for huge yields and economies of scale. The requirements of the rising population, rising food necessities, the requirement to rise crop yields, and a rise in productivity are fueling the demand.

In 2019, Massey Ferguson disclosed its stunning new MF NEXT concept tractor at Agritechnica 2019. It is a concept that embodies Massey Ferguson’s DNA and its vision to  make  tractor  technology  usable,  easy-to-use,  and inexpensive to the most farmers across the globe.

In October 2020, Kubota declared collaboration with the US chipmaker Nvidia to grow huge sophisticated self-driving farm tractors and get whole autonomy. The tractors will be fortified with Nvidia graphics processing units and artificial intelligence, combined with cameras to constantly process gathered data.

The global autonomous tractor market is highly competitive. This is attributed to incessant launch of new machineries owing to ongoing Research & Development and efforts by value chain participants. Furthermore, key players are acquiring several business development plans in order to increase their presence on regional and the global basis. Few key players in the global autonomous tractor market are:

*Definition: Autonomous tractors are the automotive utilized in farms that are autonomously operated with an intelligent system, which directs it for correct functioning. The autonomous automotive are utilized in large farm areas as there are no buildings to run into. They are also utilized to help farmers in the best manufacture of crops.

The most beneficiary aspect of the autonomous tractor would be improved productivity of the machines.  Doing more in less time and fuel. The primary price would be huge comparatively to the diesel models however during a period, the profitability that would be received from an autonomous tractor is unmatched.

The global population is growing strongly, and each day around 200,000 people are adding up to the world's food demand. As per the US population division, the world's human population rising nearly fourfold in the past 100 years, and it is evaluated to reach 9.2 billion by 2050. These are the restrictions that are proof in the method of food security issues. In Addition, officials-spent initiatives, such as the partnership of Biosciences KTN, Photonics KTN, and sensors, boosted agricultural organizations  to create from  the deployment of several sensor machineries and new electronics.

On Contrary, the effect of disintegration of land into smaller parcels, there has been the effect of urbanization, important to the conversion of agricultural land to non-farming purposes, primarily real estate, ultimately impacting the market studied.

Farm labor shortage and decreasing arable land fueling the growth of the market.

The semi automated segment is the leading component segment in the market.

Slow penetration and adoption rate is restraining growth of the market.