Betamethasone acetate is a white to off-white, odorless powder that resolidifies at approximately 165°C, decomposes and remelts at approximately 200°C to 220°C. It is practically insoluble in water, freely soluble in acetone, and soluble in alcohol and chloroform. The formula for betamethasone acetate is C24H31FO6 and it has a molecular weight of 434.50. Chemically, it is 9-Fluoro-11β, 17, 21-trihydroxy-16β-methylpregna-1, 4-diene-3, 20-dione 21-acetate. 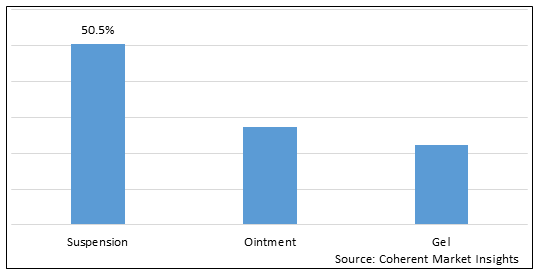 The increasing prevalence of diseases such as multiple sclerosis 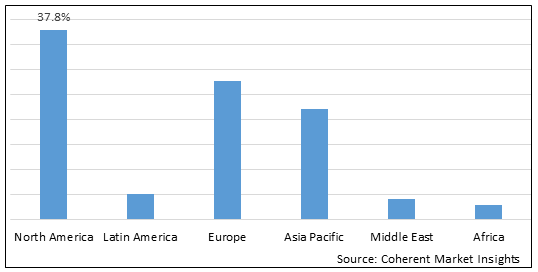 Among all regions North America region is expected to dominate the market over the forecast period. This is attributed due to the North America hold 37.8% market share and increase in the use of intramuscular suspension for treatments of various disease such as ophthalmic disease in North America region. For instance, on 19 December 2022, according to data provided by Centers for Disease Control and Prevention (CDC), Approximately 12 million people over the age of 40 in the United States are visually impaired, including 1 million blind, 3 million with corrected vision, and 8 million with uncorrected refractive error.

The Europe region is expected to second largest region over the forecast period. Due to increasing prevalence of dermatological disease in Europe. For instance, in March 2022, according to article published by National Library of Medicine, in 2021, 185 103 774 individuals in Europe affected by dermatological condition or disease.

Coronavirus disease 2019 (COVID-19) is a highly contagious infectious disease caused by severe acute respiratory syndrome coronavirus 2 (SARS-CoV-2), according to the World Health Organization (WHO) as of October 10, 2022, 44,614,437 people are affected worldwide.

Based on Formulation, the market is segmented into suspension, ointment, and gel. Out of which, suspension segment is expected to dominate the betamethasone acetate market during the forecast period and this is attributed due to increase in the usage of corticosteroids suspension.

Based on Route of Administration, the market is segmented into an intramuscular, intra-articular, and intradermal. Out of which, intramuscular segment is expected to dominate the market over the forecast period and this is attributed due to increase in the use of intramuscular suspension for treatments of various disease such as renal disease.

Based on Age group, the betamethasone acetate market is segmented into pediatric and geriatric. Of which, geriatric segment is expected to dominate the market over the forecast period and this is attributed to the increase in usage of betamethasone acetate drug to various disease in adults such as renal disease, respiratory disease.

Among all segmentation, age group segment has highest potential due to high demand of betamethasone acetate products in geriatric population. For instance, in February 2021, according to an article published by Economic Research Institute for ASEAN and East Asia (ERIA), geriatric Population in Asia nearly increase up to 956 million triple than 2015 population. More than 60% of older people in the world will live in Asia.

In age group segment, geriatric segment is dominant in Asia Pacific region due to increasing number of geriatric population. For instance, in June 2022, according to data provided by the U.S. Census Bureau, as of 2020, Asia Pacific had over 4.5 billion people (including China and India, each with over 1 billion people), accounting for more than half of the world's population. There are an estimated 414 million Asians over the age of 65, about 20% more than the total the U.S. population (331.4 million) and predicted that by 2060, over 1.2 billion Asians will be over 65 years old.

The side effects of betamethasone acetate

Betamethasone acetate is long-acting corticosteroid has anti-inflammatory and immunosuppressive effects. It can be administered parenterally to treat a number of disease states, including autoimmune illnesses, and topically to treat inflammatory skin conditions including eczema. Betamethasone sodium phosphate and betamethasone acetate injectable suspension may also be useful in cystic tumors of an aponeurosis or tendon (ganglia). Betamethasone injectable suspension is used to treat inflammation and pain from a variety of conditions. These conditions include multiple sclerosis, arthritis, and others.

The betamethasone acetate is used in various disease conditions such as renal disease, thus the increasing prevalence of renal disease is expected to drive the market growth over the forecast period. For instance, in July 2022, according to data provided by Center of Disease Control and Prevention (CDC), in 2020, more than 15% of the U.S. adults or 37 million people, are estimated to have Chronic Kidney Disease (CKD). Moreover, according to same source CKD is more common in people aged 65 years or older (38%) than in people aged 45–64 years (12%) or 18–44 years (6%).

The betamethasone acetate is used in various disease condition such as respiratory diseases, thus the increasing prevalence of respiratory disease is expected to drive the betamethasone acetate market growth over the forecast period. For instance, in August 2021, according to the World Health Organization (WHO), in 2020 approximately,  65 million people had moderate to severe  Chronic Obstructive Pulmonary Diseases (COPD) that accounts for 5% of deaths (41.9 deaths per 100 000 individuals) globally.

What is the current market size and compound annual growth rate (CAGR) of the global betamethasone acetate market during the forecast period (2022-2030)?

The increasing inorganic strategies such as partnership by key players in the market and the increasing prevalence of various disease such as dermatological, respiratory disease, and others are expected to drive the market.

Which is the leading formulation type segment in the market?

Suspension is the leading formulation type segment in the market.

The major factors that can hamper growth of the market include the product side effects and government restriction regulating safety and efficacy of betamethasone acetate.