Candidiasis is a type of infection caused due to the yeast – candida, also classified as fungus, which is present in the human body. It is usually present in places such as mouth, belly, and on the skin. This dormant yeast can lead to candida infection at any stage in a person’s life and is closely linked to the immunity level of the person. There are various types of infections caused due to candidiasis such as thrush/ oropharyngeal candidiasis, genital yeast infection/ invasive infection, and cutaneous candidiasis.

Increasing number of preterm births is expected to boost the market growth. For instance, according to the Kolling Institute of Medical Research, 2015, vaginal candidiasis can increase the risk of preterm births. Moreover, according to a survey by researchers from the University of Miyazaki in 2017, the incidence of vulvovaginal candidiasis (VC) during pregnancy is around 13–20% globally. Furthermore, according to the Obstetric and Gynecology Department, Italy, 2018, VC is estimated to be the second most common cause of vaginitis and is found in 40% of women with vaginal discomfort. VC can cause systemic infections in premature neonates, particularly those with low birth weight.

However, increasing adoption of alternative therapies, which include over-the-counter treatments, boric acid capsules, and herbal treatments such as tea tree oil, probiotic supplements, and enteric-coated essential oils, for treatment of candidiasis, is expected to hinder the market growth. 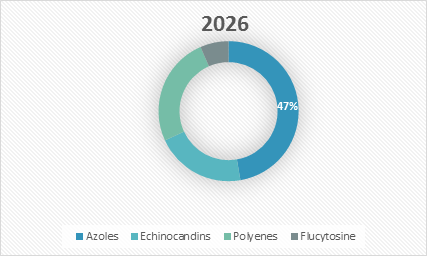 The market is expected to register significant growth as various research institutes are focused on developing novel drug combinations to enhance drug efficacy. For instance, in June 2019, microbiologists at the Beth Israel Deaconess Medical Center (BIDMC) demonstrated that combination of anti-fungal and anti-bacterial medications can effectively target multidrug resistant Candida auris. Similarly in October 2018, researchers at the American Society for Microbiology identified a compound alexidine dihydrochloride, which has the highest antifungal and anti-biofilm activity against a diverse range of fungal pathogens, thus having a greater potential for use as a pan-antifungal drug.

Major institutes and universities are focused on R&D activities related to candidiasis. For instance, on September 09, 2019, a team of researchers from Southmead Hospital, Bristol, in collaboration with Triticum Exploitatie B.V., tested the vulnerability of Candida albicans to honey and an MGH formulation (L-Mesitran) by evaluating five isolates from vaginal samples of symptomatic patients suffering from recurrent vulvovaginal candidiasis.

In August 2019, researchers from Complutense University of Madrid developed fast-dissolving orodispersible films of amphotericin B for oropharyngeal candidiasis.

In July 2019, researchers from Instituto de Química Rosario, Argentina, designed chitosan nanoformulations for the delivery of antifungal agents. The approach can aid in the development of a pharmaceutical dosage form suitable for the treatment of vaginal candidiasis.

The global candidiasis market is expected to witness significant growth, owing to increasing research for development of novel medications showcasing broad-spectrum antifungal activity against invasive fungal infections caused due to Candida albicans. For instance, in October 2018, researchers at the American Society for Microbiology identified a compound alexidine dihydrochloride, which has the highest antifungal and anti-biofilm activity against a diverse range of fungal pathogens, thus having a greater potential for use as a pan-antifungal drug.

However, easy access to alternative treatment methods such as over-the-counter treatments and others are expected to hinder the market growth.

What are the growth estimates for candidiasis market till 2026?

Which are the prominent candidiasis market players across the globe?

What are the key factors hampering growth of the candidiasis market?

Increasing adoption of alternative therapies such as over-the-counter treatments, boric acid capsules, and herbal treatments for the treatment of candidiasis is one of the major factors that is expected to hamper growth of the market over the forecast period.

What are the key factors driving growth of the candidiasis market?

Rising incidence of invasive candidiasis and vaginal candidiasis is one of the major factors that is expected to propel growth of the market over the forecast period.

What is the compound annual growth rate (CAGR) of the candidiasis market for next 8 years?

Which segment based on drug class, accounted for the highest demand in the candidiasis market?