The term eSIM means embedded SIM card. In other words, eSIM is form of programmable SIM card that is embedded directly into a device. eSIM is a small chip that is used to authenticate user identity with his or her carrier. eSIM provides many advantages such as support multiple accounts, allow switching to various mobile network operators and also manages accounts by updating the software setting from user devices. eSIM finds its applications in smartphones, laptop, tablet, wearables, connected car, M2M, and many others. These factors are expected to drive the market growth during the forecast period.

The global eSIM market is expected to witness significant growth during the forecast period (2020–2027) due to increasing demand from consumer electronics such as smartphones, tablets, and others. According to Coherent Market Insights, in China, the penetration of smartphones increased from 676.5 million in 2017 to 782.3 million in 2020. Furthermore, increasing disposable income in developed and emerging economies has led to higher spending on smartphone devices. According to the National Bureau of Statistics (NBS), China’s rural and urban per capita disposable income reached US$ 5,658.45 from US$ 2,107.2 in 2018. Moreover, according to the U.S. Bureau of Economic Analysis (BEA), disposable personal income in the U.S. increased to US$ 16,706.40 billion in December 2019 from US$ 16,675.80 billion in November 2019. Moreover, smartphone manufactures are focusing on developing new advanced technology smartphones and several telecom industries are getting benefits due to these new developments. Thus, growth in the smartphone industry has led many telecom industries to design and develop eSIM with advanced features and replaced traditional SIM card adoptions. The growing trend in smartphone adoption is expected to boost the eSIM market as smartphone manufacturer are emphasizing on offering their products with eSIM.

Increasing security threats is expected to hamper the eSIM market growth during the forecast period. This is attributed to rising technological advancement, the proliferation of M2M services, and the penetration of IoT devices. Thus, it becomes complex to secure eSIM devices from various cyber threats. These factors are expected to hamper the market growth during the forecast period.

Due to COVID-19 pandemic, several industries have witnessed significant shift in their business. There has also been a significant impact on the growth of eSIM market as manufacturing operations are temporarily suspended across many countries to contain the coronavirus. There is also a shortage of 5G chipsets in the market due to disruption in production. Many manufacturing companies such as Samsung, Xiaomi, OPPO and LG Display have suspended their manufacturing operations in China, India, South Korea and in European countries. For instance, in May 2020, OPPO Company shut down its operations in Noida, India as six employees tested positive for COVID-19. Additionally, demand for eSIM devices has decreased due to lockdown imposed in several countries.

North America held dominant position in the global eSIM market in 2019, accounting for 41.2% share in terms of value, followed by Asia Pacific and Europe. 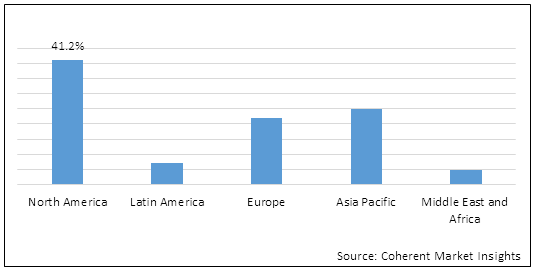 North America is expected to account for the largest market share during the forecast period, owing to the presence of key players in the region such as AT&T, Thales Group, Kore wireless, Sierra Wireless. For instance, in 22 October 2020, Kore wireless, U.S. based company who provide M2M services launched eSIMPro, which is a device validation tool. The users of eSIMPro can validate their devices themselves in just 15 minutes.

Asia Pacific region is expected to exhibit highest growth during the forecast period owing to increasing population and disposable income. According to the World Bank report, the population in India reached US$ 1,341.0 million in March 2020, from 1,327.0 million in March 2019. According to the National Bureau of Statistics (NBS), China’s rural and urban per capita disposable income reached US$ 5,658.45 from US$ 2,107.2 in 2018. The growing demand for technologically advanced smartphones is also expected to drive market growth during the forecast period.

Among application, the M2M segment is expected to hold dominant position in the global eSIM market during the forecast period owing to the several advantages offered by the implementation of eSIM in mobile devices. The M2M application are increasing the demand for eSIM devices for many industries such as retail, energy, transportation, automotive and many others. This is due to growing demand for advanced technologies such as M2M applications and IoT that are boosting the integration of eSIM in various industries. For instance, in February 2018, NXP Semiconductor, Netherland based semiconductor manufacture company launched eSIM enabled devices for 5G and IoT applications. These devices provides end-to-end security in order to provide safe data protection for consumers, service providers and original equipment manufacturers. 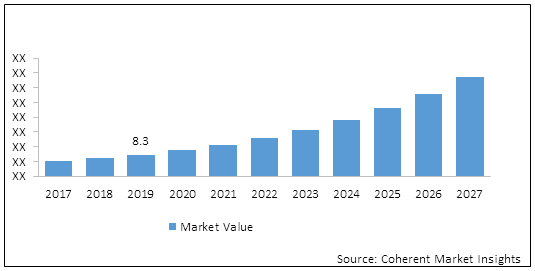 eSIM also is known as embedded SIM operates or remotely manages multiple mobile devices globally. It is mandatory for eSIMs to comply with Global System Mobile Association (GSMA) remote SIM provisioning specification. These types of SIMs are inbuilt into devices and cannot be removed. Moreover, the integration of devices with eSIM eliminating the need for physically replacing the SIM card. eSIM finds its applications in consumer electronics such as smartphones, laptops, smart wearable, tablet, smart home devices, and many others. There are many advantages offered by eSIM such as high-quality connectivity, enable users to change operators remotely and allow people to store multiple profiles on a single device having more than two numbers and can switch between one another depending on the users.

The increasing adoption of IoT technology across many verticals such as automotive, energy, retail for the manufacturing of connected devices is increasing the demand for eSIMs in the market. For instance, in April 2020, Infineon Technologies AG announced a partnership with Tata Communication, Indian based telecommunication company to launch an eSIM solution for IoT applications. Through this partnership, Infineon Technologies AG can deploy IoT connected devices around the world by using the Tata communication MOVE platform. This platform is used to offer IoT integrated services to its customers. Moreover, eSIM provides facilities for a seamless switch between the network carriers. Earlier, the device owner had to replace the physical SIM while switching to the network carrier. During the switching process, there is a high chance of data loss. The usage of eSIM reduces the threat of data loss as these SIMs are permanently integrated into the device. The facility of remotely switching between the network influencing individuals to select eSIMs over traditional SIMs. Thus, eSIMs manufactures are increasingly focusing on integrating traditional SIMs with the latest eSIMs. These factors have boosted the demand for eSIM market during the forecast period. Moreover, several global players across different countries are focusing on developing new products with new features and technologies to gain competitive edge in the market. Industries are focusing on developing new products with new features to cater to the demand from the end users. For instance, in March 2020, Infineon Technologies launched OPTIGA Connect eSIM for mobile consumer devices. This new eSIM support all Global System Mobile Association (GSMA) standards from 3G to 5G and authenticates device to subscribe to network carrier of choice.

What is the expected market size of eSIM market in 2022?

What is the expected compound annual growth rate (CAGR) of the eSIM market during the forecast period (2020-2027)?

What is the primary factor contributing to growth of the global eSIM market?

The increasing demand from consumer electronics such as smartphones, tablet and others is expected to drive growth of the eSIM market during the forecast period.

Based on application, which segment held the largest market share in the global eSIM market in 2019?

The M2M segment held the largest market share among end user, contributing 58.2% in terms of value in 2019.

Which region held the largest market share in the global eSIM market in 2019?

Who are the key players operating in the global eSIM market?