Asia Pacific is expected to be the fastest growing market for fresh meat packaging, witnessing the highest CAGR of 3.94% over the forecast period. Rapid growth of the market is attributed with the increasing meat consumption in this region, with China being the major contributor for market growth. In 2014, China recorded the largest per capita meat consumption, followed by Japan, Thailand, Indonesia, and India. However, China witnessed a decline in traction for pork meat due to safety scandals among a large number of pork suppliers, over the last two years. Growing awareness among consumers regarding the consumption of low fat protein options and the recent swine flu epidemic pose as major factors, restraining growth of the poultry segment in the region. Unlike other emerging economies, India has a very low per capita meat consumption, accounting for only 9%, in terms of volume in 2014. However, increasing per capita income and growing consumer inclination towards meat products are expected to fuel growth of the fresh meat packaging market in Asia Pacific. 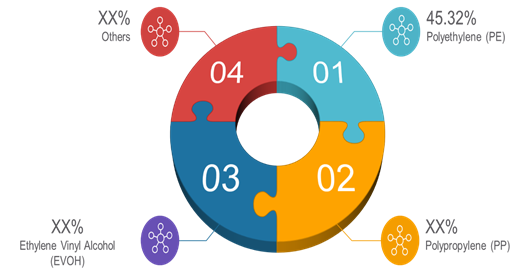 Among material type, polyethylene (PE) held a dominant position in the fresh meat packaging market in 2016 and is expected to retain its dominance throughout the forecast period.

Demand for plastics is expected to decline in the future due to growing environmental concerns regarding plastic pollution, which compel manufacturers to opt for alternative modes of packaging that cater to customer-demand as well as have less negative impact on the environment.

North America is expected to lead the fresh meat packaging market throughout the forecast period, owing to rampant product innovation, resulting from extensive research and development activities such as vacuum packaging and modified atmosphere packaging. Vacuum packaging removes atmospheric oxygen, reduces growth of aerobic bacteria, prevents evaporation of volatile components, and reduces the size of packaging. In modified atmosphere packaging, oxygen is removed and replaced by nitrogen or carbon dioxide, which lowers the pH level and helps preserve the color of meat. These factors are majorly responsible for growth of the fresh meat packaging market in North America.

Asia Pacific is expected to project the fastest growth in the fresh meat packaging market during the forecast period. Increasing demand for innovative packaging among consumers coupled with growing retail industry are fueling growth of the market in Asia Pacific.

Pharmaceuticals is the largest end-use industry in the blister packaging market. Tablets and capsules are widely sold ...

Flexible paper packaging are used to protect and package products. These are environmentally friendly bags that are av...