Moreover, rising diabetes population, worldwide combined with increasing research and development (R&D) activities by various government and private organizations in human insulin development is expected to boost growth of the global human recombinant insulin market in the near future. 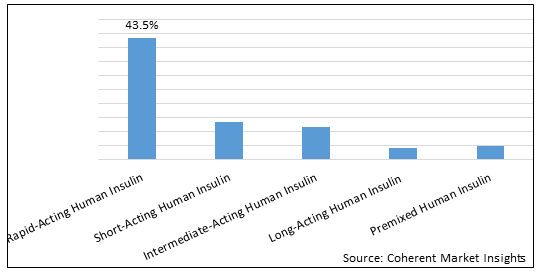 The increasing investment in diabetes research activities is expected to drive the growth of the global human recombinant insulin market.

Various government and private research organizations are engaged in research and development activities for developing advanced treatment in diabetes care to increase the effectiveness of human insulin, reduce diabetes burden, and minimize the risk of diabetes associated disorders such as diabetes-associated blindness, kidney disease, heart attacks, strokes or limb loss. For instance, on April 25, 2022, The American Diabetes Association (ADA) announced the opening of a new nomination window for the Pathway to Stop Diabetes research grants in 2022. The ADA is looking for scientists for research and development for diabetes by awarding two five-to-seven-year grants, the ADA will provide funding up to US$ 1.625 million over either five or seven years, which allows diabetes researchers the resources and protected time to pursue innovative research. 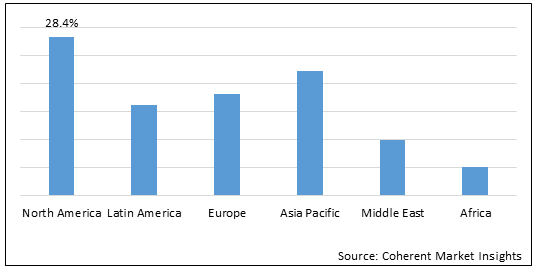 Increasing prevalence of diabetes worldwide is expected to drive growth of the human recombinant insulin market is expected to drive the market growth over the forecast period. For instance, according to data published by the World Health Organization (WHO) in 2019, diabetes was the direct cause of 1.5 million deaths and 48% of all deaths due to diabetes occurred before the age of 70 years.

Governments of various countries are focusing on the initiatives to fight against COVID-19 pandemic, and to stop the spread of coronavirus infections by implementing various measures in the countries. Moreover, to reduce the spread of COVID-19 in the country, Brazil has implemented some measures and guidelines. For instance, in 2020, Brazil government announced economic assistance to the Brazilian population to fight against the economic crises such as unemployment and others observed in Brazil. Moreover, Government of Mexico is taking initiatives to facilitate COVID-19 vaccination drive from healthcare facilities. For instance, in December 2020, Government of Mexico announced vaccination campaign drive in each state of Mexico to promote benefits of vaccination in the fight against COVID-19 pandemic

On April 26, 2022, Biologics Limited (BBL), a subsidiary of Biocon Ltd., announced that its subsidiary Biocon Sdn. Bhd. in Malaysia has been awarded a three-year contract, valued at US$ 90 million, for company’s recombinant human insulin brand Insugen by the Ministry of Health (MoH), Malaysia.

The major factors that hinder the growth of the global human recombinant insulin market include high cost of insulin, as patients from low and middle countries are unable to afford it. For instance, in September 2020, an article published by the Office of the Assistant Secretary for Planning and Evaluation (ASPE) at the U.S. Department of Health & Human Services compared insulin, pricing in the U. S. and in other countries showed that in 2018, the average gross manufacturer price for a normal unit of insulin was more than ten times the price in a sample of 32 foreign countries price of insulin in the U.S were US$ 98.70 and US$ 8.81 in the 32 Non-U.S. the Organization for Economic Co-operation and Development (OECD) countries.

Recombinant human insulin is the synthetic insulin, developed using recombinant DNA technology by growing insulin proteins within Escherichia coli. Recombinant human insulin has a faster onset of action and lower immunogenicity than other types of insulin such as pork or beef insulin. Human insulin is available primarily in two forms: a short acting (regular) form and an intermediate acting (NPH) form. Moreover, the premixed human insulin is formed by combining two types of insulin, among which one is controls blood sugar level throughout the day, while second type of insulin helps to control blood sugar at meal times. Human recombinant insulin market is gaining traction due to development of biosimilars analogue of insulin, worldwide.

Sedentary and unhealthy lifestyle, unhealthy eating, obesity, impaired glucose tolerance, diabetes family history, and increased insulin resistance are some of the risk factors for developing diabetes among the global population. Moreover, increasing number of diabetic population, and growing research and development (R&D) studies in human recombinant insulin to introduce improved version of insulin in the market is expected to boost the growth of human recombinant insulin market in near future. Key manufactures are launching innovative and improved human recombinant insulin in the market to fulfill the increasing demand for insulin. For instance, on November 16, 2021, Viatris Inc., a pharmaceutical company and Biocon Biologics Ltd., a biopharmaceutical company announced the U.S. launch of interchangeable biosimilars SEMGLEE (insulin glargine-yfgn) injection, a branded product, and Insulin Glargine (insulin glargine-yfgn) injection, an unbranded product, to help control high blood sugar in adult and pediatric patients with type 1 diabetes and adults with type 2 diabetes. Both biosimilars products are available in vial and prefilled pen.

What is the current market size and compound annual growth rate (CAGR) of the global human recombinant insulin market during the forecast period (2022-2030)?

What are the major factors driving the growth?

Which is the leading Product Type segment in the market?

Rapid-Acting Human Insulin is the leading product type segment in the market.

The major factors hampering the growth of the market include high cost of insulin.