Press Release: Mushroom Market to reach around US$ 87.7 Billion by 2027

Mushroom is a fruit of fungi that grows under the ground in the presence of humidity, food, a temperature which leads to the formation of buds- a mushroom. These buds grow more in size in the presence of sunlight and produce millions of spores like pollen or seeds which are then traveled by air and the rest of the mushroom then matures, living on the soil. Mushroom can be classified into an edible and non-edible mushroom, edible mushroom contains lots of nutrients and non-edible mushroom if eaten may cause stomach ache or vomiting. Some researchers have also suggested that mushrooms have medicinal properties as they are capable of protecting against cancer. Furthermore, they are also beneficial for people suffering from neurodegenerative diseases.

Rising awareness regarding the health benefits of mushroom is shifting consumer preferences for mushroom is projected to augment the market growth of mushroom. Across developing countries, consumers adopting a healthy lifestyle and are more conscious of their diet and mushroom-based processed food products are highly rich in minerals, vitamins, and protein which is further expected to raise their demand, in turn propelling the market growth of mushroom.

On basis of the region, North America region dominated the global mushroom market in 2018, accounting for 34.6% share in terms of volume, followed by Europe and Asia Pacific respectively.

Another major factor that is hindering the market growth of mushrooms is its short shelf life which is anticipated to restrict its adoption across the food industry. Moreover, mushroom cultivation is highly labor-intensive with high operational costs. This is a major factor which is considerably impacting the market growth of mushroom over the forecast period.

Rising advancement in packaging technologies such as Sira-Flex film for packaging of mushrooms for maintaining moisture, inhibiting the bacterial contamination, and avoids spoilage or browning of the product is expected to propel the market growth. Such an advanced packaging solution improves shelf life as well as the aesthetic appeal of the product and also enables manufacturers to offer a variety of mushrooms at various stores, supermarkets, hypermarkets, etc.

The rising focus of the manufacturer to introduce beverages based on the medicinal mushroom is expected to augment the market growth of mushroom over the forecast period. For instance, in October 2019, Rebbl, a US producer of plant-based functional beverages, has introduced Mayan Cocoa Gold Label Elixir, an organic drink featuring four medicinal mushrooms, to support immune health. The new product expands Rebbl’s line of super herb elixirs which includes the flavors: Matcha Latte, Turmeric Golden-Milk, and Reishi Cold-Brew.

Due to rising demand for mushroom among consumers, major players are entering into partnerships/agreements to increase their mushroom production capacity, enhance distribution network, and expand their presence in the global market. For instance, in April 2016, Greenyard Foods acquired a percentage of shares of Lutece Holding B.V., which is a producer and distributor of fresh mushrooms and mushroom products. This acquisition supports the company to strengthen its position in the preserved mushroom segment.

Rising consumption of nutritional bars & chocolate due to the changing lifestyle of consumers is encouraging manufacturers to launch mushroom-based bar. A mushroom is a rich source of vitamins and minerals. For instance, in March 2017, Purely Elizabeth—known for its delish probiotic granola and nutrient-filled oatmeal, has launched a whole new wellness bar line all made with mushroom powder. The five new Purely Elizabeth bars each have a different function: immunity, mind, shine, energy, and refresh. 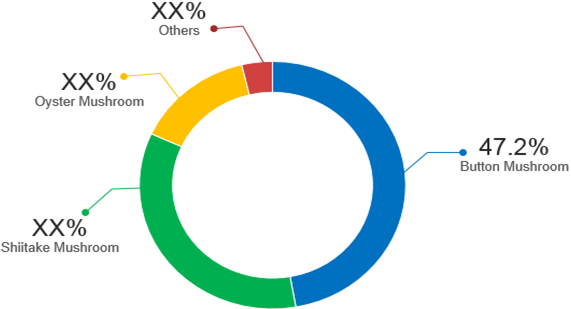 On the basis of type, in 2018, the button mushroom segment has accounted the largest market share of 47.2% in terms of value, followed by the shiitake mushroom and oyster mushroom respectively. 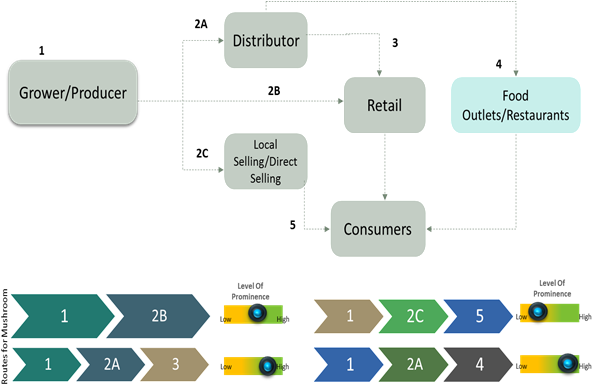 Mushroom is a fruit of fungi that grows under the ground in the presence of humidity, food, a temperature which leads to the formation of buds known as mushroom. They are enriched with potassium, selenium, vitamin D and riboflavin.

What are the growth estimates for mushroom market till 2027?

The global mushroom market is estimated to reach around US$ 87.7 Billion by the end of 2027, in terms of revenue.

Which are the prominent mushroom market players across the globe?

What are the key factors hampering growth of the mushroom market?

Low production of mushrooms around the globe, as they require humidity and moderate temperature for growth and it is one of the major factors that is expected to hamper growth of the market over the forecast period.

What are the key factors driving growth of the mushroom market?

Growing consumption of mushroom processed food is one of the major factors that is expected to propel growth of the market over the forecast period.

What is the Compound Annual Growth Rate (CAGR) of the mushroom market for next 8 years?

Which region held the largest market share in the mushroom market?

Among regions, North America held a dominant position in the global mushroom market in 2018, accounting for 34.6% share in terms of volume, followed by Europe and Asia Pacific respectively.