Greenhouse gas (GHG) emission is increasing globally, owing to increasing urbanization. For instance, according to the U.S. Environmental Protection Agency, total U.S. greenhouse gas emission was 6,456.7 million metric tons of carbon dioxide equivalents in 2017, of which 82% was carbon dioxide itself. Carbon Capture and Sequestration (CCS) provides sustainable solution for reducing GHG emission. CO2 emission is controlled in CCS process by first collecting/absorbing CO2 from industrial process streams, which is then stored underground, by which CO2 will not be released to the atmosphere.

MDEA efficiently absorbs CO2 and therefore, it is considered as a potential absorbent in the carbon capture process in CCS. Increasing awareness regarding lowering of GHGs and demand for efficient CCS technology is expected to drive growth of N-Methyl Diethanolamine (MDEA) market. For instance, Gas Technology Institute (GTI) is investigating a membrane contactor for pilot-scale CO2 capture system based on polyether ether ketone hollow fiber membranes, which utilizes MDEA as an amine solvent to capture CO2.

However, adverse effects of MDEA on environment & availability of substitutes is expected to hinder the growth of the global N-methyl diethanolamine (MDEA) market over the forecast period.

Asia Pacific accounted for the largest revenue share of 34.0% in the global N-methyl diethanolamine (MDEA) market in 2018. The region is also projected to record the fastest growth during the forecast period. This is attributed to the rapid expansion of end-use industries such as textile and oil & gas, especially in emerging economies such as China and India. 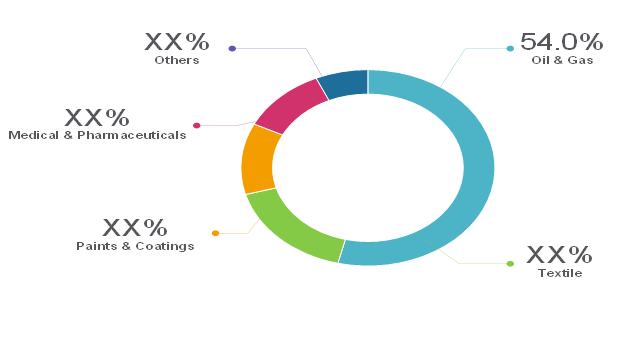 N-Methyl Diethanolamine (MDEA) is organic compound that is colorless liquid and has ammonia odor. N-Methyl Diethanolamine is widely used as a sweetening agent in oil refinery, natural gas and syngas, and chemicals production. The applications of MDEA include gas absorbent, catalyst for urethane and epoxy resin coating system, and as formulators in oil & gas industry.

Among regions, Asia Pacific held dominant position in the global N-Methyl diethanolamine (MDEA) market in terms of revenue share, in 2018. The region held around 34.0% of the total revenue share generated across the globe. The regional growth is derived by the expansion of end-use industries such as textile and oil & gas coupled with the growing use of MDEA in these industries.