Nail Polish is a lacquer, which is applied on fingernails or toenails to protect and decorate nail plates. It is manufactured using various chemical compositions such as solvents, film formers, pigments, resins, plasticizers, pearls, and thickening agents such as stearalkonium hectorite, in order to bind other ingredients, which makes the polish easier to apply.

Growing population of working women together with increasing awareness about grooming among consumers is fueling growth of the cosmetic industry, which in turn is driving the global nail polish market growth. For instance, according to the U.S. Department of Commerce, International Trade Administration (ITA), in 2016, the Indian Beauty and Personal Care (BPC) industry was valued at US$ 8 billion, and is expected to exhibit a CAGR of 5-6% in the period between 2017 and 2021. As a result, demand for nail polish products is also expected to increase during the forecast period.

However, rising health concerns, owing to the use of harmful chemicals in manufacturing nail polish are likely to have hamper growth of global nail polish market in the near future. Nail polish contains toxic and hazardous chemical ingredients such as toluene and dibutyl phthalate, which can adversely affect human health. The health risks associated with nail polish range from issues with reproductive health to chronic health problems such as cancer. According to the U.S. Food & Drug Administration, under section 740.1, it is mandatory for cosmetic manufacturers to put a warning on product labels regarding health hazards that could occur from using a product. Moreover, the product label must have a list of ingredients used in descending order of dominance, as per their respective content.

Asia Pacific held for the largest revenue share of 27.9% in the global nail polish market in 2018, and is projected to continue its dominance during 2019-2027. This is owing to increasing number of working women population that leads to high demand for nail polish products in the region. Women working in corporate sector are concerned about their appearance, which is expected to increase demand for nail polish. For instance, according to World Bank, in Japan, the female labor force was 43.11% of the total labor force in 2016, and increased to 43.61 % in 2018.

Growing cosmetic industry is driving growth of the global nail polish market in Asia Pacific region. According to International Trade Administration (ITA), in 2015, the cosmetic industry in Japan was valued at US$ 13,208 million and in 2014, per person expenditure on personal care and cosmetics was US$ 174 annually.

Based on distribution channel, specialty stores segment dominated the global nail polish market and contributed 43.1% of revenue share in 2018. Specialty stores offer specific products according to type of store. Specialty stores are often more expensive as compared to supermarkets. Furthermore, already established trust among consumers about the quality of nail polish and its brands at these stores is driving growth of this segment, globally. 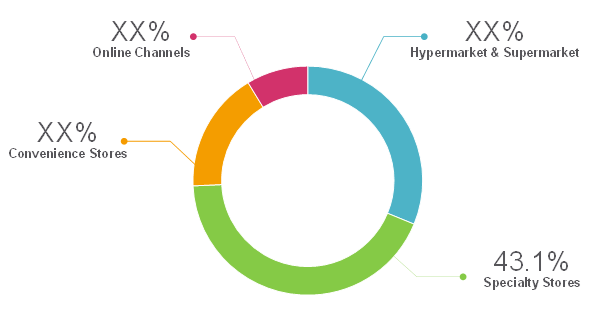 However, hypermarket & supermarket segment is projected to record the fastest growth during the forecast period, attributing to rapid expansion in number of stores globally. According to the U.S. Department of Agriculture (USDA), in 2017, the total number of supermarkets in Egypt were 1,056 in 2016, and it increased to 1,215 in 2017.

Nail polish is a type of lacquer, which is used to decorate fingernails and toenails. Nail polishes are coatings applied to nails to provide a pleasing look and to supplement the nails. In order to make nail polish flexible, peeling, and strong, various chemicals such as solvents, film formers, resins, plasticizer, pigments, pearls, and other ingredients are added to the nail polish. It contains film-former such as cellulose acetate butyrate or nitrocellulose in order to make product hard and shiny when it dries.

Increasing awareness about grooming among consumers is fueling growth of the cosmetic industry, which in turn is driving the nail polish market growth. For instance, according to the U.S. Department of Commerce, International Trade Administration (ITA), in 2016, the Indian Beauty and Personal Care (BPC) industry was valued at US$ 8 billion, and it is expected to exhibit a CAGR of 5-6% in the period between 2017 and 2021.

Among product type, liquid segment held largest revenue share of 85.2% in global nail polish market in 2018. This trend is expected to continue further over the forecast period, owing to the wide availability of wide range of liquid nail polish in the global market. Moreover, rising number of beauty and nail salons is further expected to contribute to growth of global nail polish market in the near future. According to the U.S. Nails Magazine Statistics published in 2018, the number of nail salons operating in the U.S. increased from 48,930 salons in 2013 to 56,386 salons in 2017.

Among regions, in 2018, Asia Pacific held dominant position in the global nail polish market and contributed revenue share of 27.9%. The regional growth is driven by increasing population of working women along with growing cosmetics industry in the region. According to India Brand Equity Foundation (IBEF), Indian beauty, cosmetic, and grooming market was valued at US$ 6.5 Bn in 2016 and is expected to reach value of US$ 20 billion by the end of 2025.

What are the growth estimates for nail polish market till 2027?

Which are the prominent nail polish market players across the globe?

What are the key factors hampering growth of the nail polish market?

Rising health concerns, owing to the use of harmful chemicals in manufacturing nail polishis one of the major factors that is expected to hamper growth of the market over the forecast period.

What are the key factors driving growth of the nail polish market?

Growing population of working women, coupled with increasing awareness about grooming among consumers are some of the major factors that are expected to propel growth of the market over the forecast period.

What is the compound annual growth rate (CAGR) of the nail polish market for next 8 years?

The global nail polish market is estimated to exhibit a CAGR of 10.3% over the forecast period.

Which region held the largest market share in the nail polish market?

Among regions, Asia Pacific accounted for the largest revenue share of 27.9% in the global nail polish market in 2018 .