Eyewear consists of items and accessories worn on or over the eyes, for fashion or adornment, protection against the environment, and to improve or enhance visual acuity. Common forms of eyewear include glasses (also called eyeglasses or spectacles), sunglasses, and contact lenses. Eyewear can also include more utilitarian forms of eye protection such as goggles. Blindfolds are a form of eyewear used to block vision for a variety of purposes.

Rising geriatric population is augmenting growth of the eyewear market, owing to increasing number of populace suffering from eyesight deterioration. This commonly occurs in the form of presbyopia after the age of 40 or in age-related macular degeneration, which occurs after the age of 60.

According to U.S. Census Bureau, the geriatric population (aged 65 years and over) is expected to nearly double in the next four decades, rising from 43.1 million in 2012 to 83.7 million in 2050. Moreover, in 2030, over 1 in 5 (20.3%) U.S. residents is expected to be counted among the older population, which is the largest proportion on record. This is further expected to increase the number of people requiring some form of vision correction in this region, which in turn is propelling growth of the eyewear market in North America.

According to government of Canada, in 2014, over 6 million Canadians were aged 65 or older, representing 15.6% of Canada's population. The government also estimates that by 2030, geriatric population will be over 9.5 million, which will make up 23% of Canadians. This is expected to propel growth of the eyewear market in this region.

Among country, U.S. held dominant position in the North America eyewear market in 2020, accounting for 91.8% market share in terms of revenue, followed by Canada. The U.S. eyewear market is rapidly growing due to high incidence of myopia and hypermetropia. The U.S. National Health and Nutrition Examination Survey reported increasing prevalence of myopia in the 21st century as compared to the previous century. This coupled with increasing access to eye care and diagnosis of previously uncorrected eye defects are projected to drive growth of the spectacles and contact lenses (others) segments of the eyewear market. 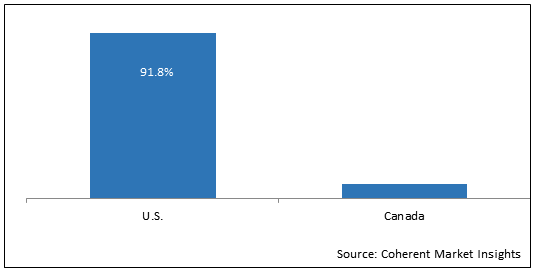 Rising adoption of alternate vision correction techniques is expected to hinder the market growth of North America eyewear market. Rising awareness and implementation of vision correction techniques such as Laser-Assisted in Situ Keratomileusis (LASIK) in addition to Photorefractive Keratectomy (PRK) are major factors restraining growth of the North America eyewear market. LASIK and PRK are correction surgeries for treatment of refractive errors such as astigmatism, myopia (near-sightedness), and hypermetropia (farsightedness). According to the American Academy of Ophthalmology, over 700,000 LASIK surgeries are performed in the U.S. every year. These surgeries have gained significant traction in the recent past, as these surgeries offer a permanent solution to refractive errors. Surgeries were earlier considered as unsafe among the populace, however, technological advancements such as improvement in laser technology and improvements in eye modeling has led to increased adoption of vision correction surgeries.

The growth of the corrective glasses is mainly driven by the increasing population suffering from refractive errors, and the cost-effectiveness of eye care devices over refractive surgeries. Compared to men, females are at a higher risk of developing refractive errors. All these factors are responsible for driving the growth of the corrective glasses industry across the world. Increasing acute myopia among young consumers and growing awareness about eye health are likely to drive the growth of the market during the forecast period. The significant growth in smartphone and computer users is intensifying the cases of computer vision syndrome (CVS), which is caused due to focusing the eyes on laptop or other display devices for a long time. This factor has also been influencing the sales of corrective eyewear since the past few years. 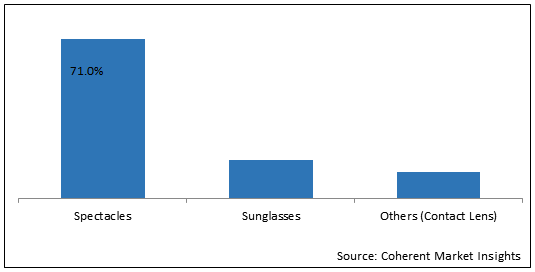 On the basis of product type, in 2020, spectacles segment held largest revenue share of 71.0% in North America eyewear market. The segment is expected to reach US$ 39.93 billion by 2028. Spectacles are majorly used for vision correction for refractive errors such as myopia, hypermetropia, and astigmatism. According to Vision Council of America, around 75% of adults use some sort of vision correctors in the U.S. and around 64% of the adults use spectacles as their preferred form of vision correction.

The COVID-19 impact across industries varies. The outbreak has flipped the growth switch in every sector of the economy. The impact of Covid-19 has been unprecedented and staggering, with eyewear products, witnessing a negative impact on demand across all regions. However, the outbreak of coronavirus pandemic in 2020 is expected to restrain the market growth for a couple of years owing to a decrease in regional and international cycling competitions. The increasing spread of COVID-19 has also mandated the eyewear manufacturers to deploy precautionary measures in their facilities including labors and plant controllers screening and monitoring and sanitizing the facilities. This has further increased the plant operational costs, which has indirectly increased the prices of these high value-added eyewear.

Eyewear comprises accessories that are worn over the eyes for vision correction or to protect eyes from debris, harmful radiations or excessive light. Eyewear includes spectacles, lenses and sunglasses worn for vision correction or protection of eyes from harmful UV lights and dust particles. Factors such as increasing life span, growing geriatric population, and changing fashion trends have fostered the demand for eyewear, worldwide. In the present scenario, consumers not only wear eyewear for vision correction, but also for enhancing one’s appearance. Numerous market players offer innovative spectacles and lenses, owing to technological advancements and availability of lightweight materials. Emerging countries such as India and China are exhibiting a rapid growth in the eyewear market.

Growing visual impairment and need for vision correction have resulted in increased demand for eyewear. Presently, the younger generation is more inclined towards digital devices, spending most of their time on digital devices such as mobiles, laptops, and video games. Moreover, health concerns such as diabetes also affect vision of people, resulting in blindness. Thus, people suffering from diabetes need to undergo regular eye checkups to avoid vision problems. Hence, growing visual deficiencies and vision impairments are expected to drive the growth of the North America eyewear market during the forecast period.

Conscious efforts are now being put into standardization of medical and vision care facilities in rural areas, in a bid to reduce eyesight related issues. Governments in various countries in partnership with different organizations are initiating programs to provide reasonable eye care facilities to the rural population. With such initiatives in place, rural population would benefit from efficient healthcare and eye care facilities. Thus, these collaborations with different institutions would drive the growth of North America eyewear market.

What will be the North America eyewear market size be in 2028?

Rising geriatric population in North America, and rising product innovation in the eyewear industry are the major factors driving the market growth.

The exponential growth of social media is offering new growth avenues for the market.

Rising adoption of alternate vision correction techniques is expected to hinder growth of the market.

A pawn shop is a shop or a business which loans money to c...

Bath bomb cold pressed soaps are a hard-packed mixture of ...

Drinking water being an essential and most important resou...

Baby diaper is also known as nappy is a type of underwear ...