Olive oil is extracted from olives and is considered as one of the healthy oil types, owing to its health benefits such as lowering of blood pressure. Olive oil is offered as extra virgin olive oil, virgin olive oil, and lampante olive oil according to the method of production and composition of fatty acids in the oil. For instance, virgin olive oil is the oil derived from the fruit of olive tree (Olea europaea L.) by mechanical extraction method such as by washing, decantation, centrifugation, and filtration.

Increasing awareness regarding health benefits offered by olive oil is expected to drive the market growth over the forecast period. Olive oil contains monounsaturated fatty acids, which are considered as healthy fats. Monounsaturated fatty acids reduce bad cholesterol that is low-density polysaccharides (LDL) and triglycerides. Therefore, olive oil is considered as an effective solution for patients of coronary heart disease.

Moreover, key players in the market are focused on various strategies such as acquisitions and capacity expansion, in order to cater to increasing demand for olive oil. For instance, in May 2019, Solfrut, a Latin American agricultural company, announced its plans of renovating its existing olive oil production plant in Argentina. The renovation is expected to increase olive oil storage capacity to 4,000 tons. This project is expected to be completed by 2021.

Moreover, in February 2014, Cargill Inc. announced signing of an agreement with Dalmia Continental Pvt. Ltd (DCPL) to acquire its Leonardo Olive Oil business. Leonardo is a major olive oil brand and has significant presence in countries such as India. Therefore, the acquisition is expected to strengthen the market presence of Cargill Inc. in India.

Furthermore, Europe held significant market share in the global olive oil market in 2018 and is expected to maintain its dominance over the forecast period. This is attributed to increasing consumption of olive oil in the region in end-use industries. According to data released by Food and Agriculture Organization of the United Nations in January 2019, Europe accounted for largest market share in global virgin olive oil production accounting for 74.3% during 2004 to 2014. As per the same source, Spain ranked first in the list of top 5 global virgin olive oil producers during 2004 to 2014. 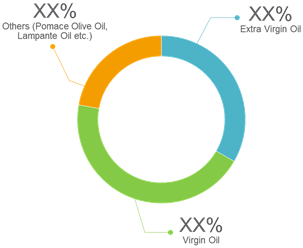 Olive oil has various health benefits such as presence of antioxidants and low level of saturated fats and therefore, is widely used for culinary applications. Moreover, olive oil is also used in personal care products, owing to its moisturizing effect. However, availability of alternatives is expected to restrain growth of the market. Other vegetable oils such as soy oil, palm oil, corn oil, and coconut oil are already available in the market, which is expected to pose a threat to growth of the global olive oil market. Moreover, olive oil production is limited to only certain geographic locations such as Europe and North America. Such factors are expected to pose a challenge to olive oil market growth.

Increasing demand for olive oil is attributed to rising awareness regarding health benefits of olive oil such as anti-cancer effects. This is expected to boost its consumption and in turn, drive the market growth. For instance, according to data released by International Olive Oil Council in November 2018, the U.S. olive oil consumption increased from 258 thousand tons in 2009-10 to 295 thousand tons in 2014-15. Moreover, according to data released by the U.S. Department of Agricultural, Economic Research Service, in March 2019, world olive oil production was 2.40 million metric tons in 2014-15, which increased to 3.26 million metric tons in 2017-18.

Moreover, olive oil industry waste is being considered as a potential raw material for production of bio-based fuels. Non-renewable energy sources such as crude oil are depleting at high rate. However, energy demand is increasing with rising population. Therefore, there is rising need for development of sustainable resources. For instance, according to a research paper, ‘Production of Biodiesel from an Olive Oil Industry Waste’ released at the RCN Conference on Pan American Biofuel and Bioenergy Sustainability in 2016, ‘Alperujo’ (blend of water, oil, cellulose, lignin, proteins, and carbohydrates) is a waste product obtained from the process of olive oil extraction. The byproduct can be successfully used as feedstock to obtain biodiesel.

What are the growth estimates for olive oil market till 2027?

Which are the prominent olive oil market players across the globe?

Which segment based on distribution channels, accounted for the highest demand in theolive oil market?

Among distribution channels, business-to-business segment is expected to hold dominant position in the market over the forecast period.

What are the key factors driving growth of the olive oil market?

Increasing awareness regarding health benefits offered by olive oil is one of the major factors that is expected to propel growth of the market over the forecast period.

What is the compound annual growth rate (CAGR) of the olive oil market for next 8 years?

The global olive oil market is estimated to exhibit a CAGR of 1.0% over the forecast period.

Which region is dominating the olive oil market growth?

Among regions, Europeis expected to hold a dominant position in the global olive oil market during the forecast period.

Sports nutrition are food products specifically designed for bodybuilders and athletes to improve the overal...

The botanical supplements are popularly known as herbal medicinal products and are in high demand due to gro...

Definition of Market/Industry: Food additives are in...

Food safety products and testing refers to the testing of food in order to detect the presence of disease-ca...