Pulmonary surfactant is a complex mixture of phospholipids and proteins that creates a unique interface separating alveolar gas and liquids at the alveolar cell surface, reducing surface tension, and maintaining lung volumes at end expiration. Reduction of the surface tension at the air–liquid interface is a requirement for respiratory function following birth. Deficiency of pulmonary surfactant causes respiratory failure in premature infants, or infantile respiratory distress syndrome (IRDS). The adequacy of pulmonary surfactant is maintained by unique and highly regulated systems mediating the synthesis, secretion, reutilization, and catabolism of surfactant. Loss or inactivation of pulmonary surfactant later in life occurs in the adult respiratory distress syndrome (ARDS), a significant cause of morbidity and mortality following infection, shock, or trauma. Mutations in genes regulating surfactant homeostasis, including SFTPA, SFTPB, SFTPC, ABCA3, TITF1, and CSF2RA cause acute and/or chronic lung disease in newborn infants, children, and adults. Disorders of GM-CSF signaling inhibit surfactant lipid and protein catabolism by alveolar macrophage causing pulmonary alveolar proteinosis (PAP). 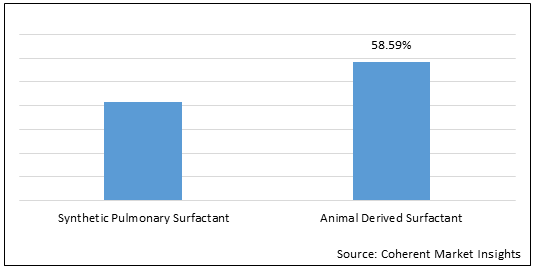 Increasing preference of animal derived surfactant for the treatment of respiratory distress syndrome is driving the pulmonary surfactant market growth over the forecast period.

Increasing preference of animal derived surfactant for the treatment of respiratory distress syndrome is driving the pulmonary surfactant market growth over the forecast period. For instance, in May 2021, according to the article published in Archives of Clinical and Medical Case Reports, an open access, peer reviewed Journal, Poractant alfa (Curosurf), significantly reduced the rates of pneumothorax (the presence of air or gas in the cavity between the lungs and the chest wall, causing collapse of the lung) in preterm infants with respiratory distress syndrome. This reduction was more significant in VLBW (very low birth weight) than non-VLBW (very low birth weight) infants.

Furthermore, on April 11, 2022, an article was published in National Center for Biotechnology Information, a branch of the National Institutes of Health, which reported that when animal derived pulmonary surfactant is combined with budesonide, a corticosteroid or steroid, in the treatment of neonatal respiratory distress syndrome can effectively shorten the hospital stay and reduce the time of invasive mechanical ventilation and the incidence of BPD (bronchopulmonary dysplasia). Meanwhile, it does not increase the risk of related complications or death. This approach can be applied clinically. 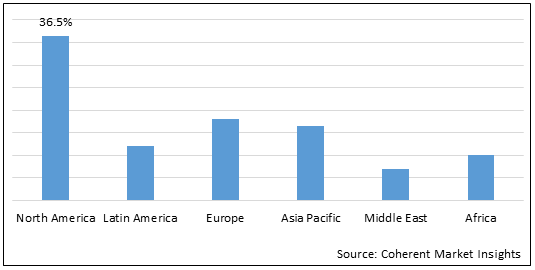 Increasing prevalence of respiratory infections are attributing to the highest share of North America market in the global pulmonary surfactant market.

Increasing prevalence of the respiratory infections in the U.S. is expected to drive market growth over the forecast period. For instance, in June 2021, The Centers for Disease Control and Prevention, a national public health agency of the U.S. stated that each year in the U.S., RSV (Respiratory Syncytial Virus) leads to on average approximately 58,000 hospitalizations with 100-500 deaths among children younger than 5 years old and 177,000 hospitalizations with 14,000 deaths among adults aged 65 years or older. Infants, young children, and older adults with chronic medical conditions are at risk of severe disease from RSV infection

Since the COVID-19 virus outbreak in December 2019, the disease has spread to over 100 countries across the globe and the World Health Organization had declared it a public health emergency on January 30, 2020.The sudden outbreak of COVID-19 has bought the world to a standstill.

Increasing research and development between the key market players of pulmonary surfactant market during COVID-19 pandemic is expected to drive the market growth over the forecast period. For instance, on March 22, 2022, Windtree Therapeutics, Inc., a biotechnology company multiple late-stage interventions for acute cardiovascular and pulmonary disorders, announced results from its Phase 2 study of lucinactant (KL4 surfactant) for patients with severe COVID-19 associated acute respiratory distress syndrome (ARDS) and lung injury. The objective for the study was that the SARS-CoV-2 virus causing COVID-19 uses the angiotensin-converting enzyme 2 (ACE2) receptor for entry into host cells. The Phase 2 trial was designed to assess feasibility, safety, and tolerability of administration of reconstituted lyophilized lucinactant in these critically ill patients.

Increasing number of side effect associated with the pulmonary surfactant drug restrain the growth of pulmonary surfactants market. The drugs used in the treatment of respiratory disorders have several side effects. For instance according to a report published by RxList Inc, an online medical resource offering detailed and current pharmaceutical information on brand and generic drugs, on March 3, 2022, common side effects of Surfaxin, a liquid medication used to treat infant respiratory distress syndrome, are related to its administration down a premature infant's breathing tube (endotracheal tube) and include endotracheal tube reflux, skin paleness, endotracheal tube obstruction, and need for dose ductus arteriosus and lung problems.

Pulmonary surfactant is a complex and highly surface active material composed of lipids and proteins which is found in the fluid lining the alveolar surface of the lungs. Surfactant plays a vital role in pulmonary physiology. It’s major biophysical functions is to prevent alveolar collapse at low lung volume and to preserve bronchiolar patency during normal and forced respiration, and it’s major non biophysical, immunological, functions is protection of the lungs from injuries and infections caused by inhaled particles and micro-organisms. Pulmonary surfactant is heterogeneous with respect to biochemical composition, morphological organization and specific biophysical functions. Surfactant prevents alveolar collapse at low lung volume, and preserves

bronchiolar patency during normal and forced respiration (biophysical functions). In addition, it is involved in the protection of the lungs from injuries and infections caused by inhaled particles and micro-organisms (immunological, non-biophysical functions). Pulmonary surfactant can only be harvested by lavage procedures, which may disrupt its pre-existing biophysical and biochemical micro-organization. These limitations must always be considered when interpreting ex vivo studies of pulmonary surfactant.

Increasing rate of prevalence of several respiratory infection and respiratory is expected to drive the global pulmonary surfactant market over the forecast period. For instance, on May 20, 2022, 90% of COPD (Chronic obstructive pulmonary disease) deaths were reported globally, in those under 70 years of age occur in low- and middle-income countries (LMIC) such as India, Korea and Bangladesh. Chronic obstructive pulmonary disease (COPD) is one of the major cause of death worldwide, causing 3.23 million deaths in 2019.

Increasing drug approvals for novel therapeutic agents are some of the key factors driving the global pulmonary surfactant market growth. For instance, in July 2020, Boehringer Ingelheim, a pharmaceutical company, announced that the European Commission (EC) approved an additional indication for nintedanib in adults for the treatment of other chronic fibrosing interstitial lung diseases (ILDs) with a progressive phenotype beyond idiopathic pulmonary fibrosis (IPF). The approval comes after the Committee for Medicinal Products for Human Use (CHMP) adopted a positive opinion in May 2020. The U.S. Food and Drug Administration (FDA), Health Canada and the Japan based pharmaceuticals and Medical Devices Agency (PMDA) approved nintedanib as the treatment for the same patient population. The approval is based on the results of INBUILD, which was a randomized, double-blind, placebo-controlled, parallel-group phase III trial, which evaluated the efficacy, safety, and tolerability of nintedanib in patients with chronic fibrosing ILDs with a progressive phenotype.

What are the growth estimates for global pulmonary surfactant market till 2030?

The global pulmonary surfactant market is estimated to surpass US$ 822.9 million by 2030.

Which are the prominent pulmonary surfactant market players across the globe?

Which segment based on type, accounted for the highest demand in market of pulmonary surfactant in 2022?

Increasing preference of animal derived surfactant for the treatment of respiratory distress syndrome is driving the growth of pulmonary surfactant market growth during the forecast period.

What is the Compound Annual Growth Rate (CAGR) of the market till 2030?

The market is estimated to exhibit a CAGR of 4.50% over the forecast period.

Which region is dominating the market growth?

Among regions, North America is expected to witness significant growth over the forecast period, owing to increasing prevalence of respiratory infections in the U.S.