Software Defined Storage Market, by Component (Platforms/Solutions and Services), By Storage Usage (Surveillance, Data-Backup and Disaster-Recovery, Storage Provisioning and High Availability, Others), By Organization Size (Small and Medium Enterprises (SMES) and Large Enterprises), By Application (Education, Telecom and Ites, Logistics and Warehouse, Healthcare, Media and Entertainment, Banking, Financial Services, and Insurance (BFSI), Others) and by Geography – Global Forecast to 2025

Software Defined Storage Market to Generate Revenue of US$ 47.2 Billion by 2025

Software-defined storage (SDS) is a marketing term for computer data storage software that defines policy-based provisioning and management of data storage. The process does not depend on the underlying hardware and includes a form of storage virtualization to separate the storage hardware from the software that manages it. A software-defined storage environment may also provide policy management for features such as data deduplication, replication, thin provisioning, snapshots and backup. Software-defined storage may be implemented via appliances over a conventional Storage Area Network (SAN), or implemented as Network-Attached Storage (NAS), or using object-based storage. SDS offers benefits such as improved system performance, web facilitation, and reducing maintenance cost, that have increased demand for SDS. Furthermore, increasing in data pool is major factor contributing to growth of the market. According to Coherent Market Insights’ analysis, around 2.6 Quintillion bytes of data is generated each day worldwide.

On the basis of component, the software defined storage market is segmented into solution and services. The solution segment held the dominant position in the market and is projected to retain its dominance throughout the forecast period. Increasing adoption of data security plays a key role for growth of the market. Most organizations have to mandatorily follow compliance guidelines and policies for sharing and storing data for securing critical information related to business operations.. The integration of security and compliance solution in existing software defined storage solution have increased the demand for supportive solutions. 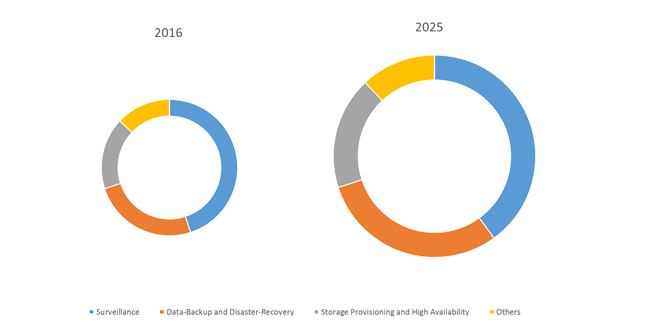 Asia Pacific software defined storage market is projected to grow with the highest CAGR in the forecast period.

North America held a dominant position in the market in 2016 and is projected to retain its dominance throughout the forecast period. The U.S. and Canada are the major growth engines in the region. The increasing government projects related to digitalization is a major factor fueling growth of software defined storage market in this region. According to U.S. digital government strategy report on “Building a 21st Century Digital Government”, the government aims to develop better digital services to enhance lives of the country’s population.

Asia Pacific is projected to be fastest growing market for software defined storage over the forecast period, with India, China, and Japan positioned as the major growth engines in the region. The increasing IT industries and growing numbers of startups become one of the major factor for rising demand for data storage market, will boost the demand for software defined storage solutions. According to economic survey 2015-2016 released by Government of India, the country has over 19,000 technology enabled startups driven by consumer internet and financial services startups. Moreover, according to survey report in 2015, the India startup raised US$ 3.5 billion. Due to popularity of software defined storage benefits such as creates smarter integration between workload & storage, gain control & efficiency and acquire real time scalability, the small and medium size enterprises adopting this technology. Hence, this helps small and medium enterprises to reduce storage cost and achieving better business functions.

Healthcare segment is projected to witness the highest CAGR over the forecast period. Rising adoption of wearable devices to track patient’s condition has led to increasing volume of data, as these devices offer data of individual patients. Storage and management of this large volume of data is difficult. Therefore, demand for software defined storage is increasing from the healthcare industry. According to Coherent Market Insights, in 2016, 275 million units of wearable devices have shipped globally. This is owing to increasing demand for data storage and management in the healthcare industry. This in turn is expected to aid in growth of the global market over the forecast period. Moreover, the increasing adoption of internet of things technology in healthcare industry also uplifted the market of software defined storage market in healthcare industry.

Building information modeling (BIM) is a course of action ...

Generally engineers use PCB design software to design the ...

Event management software is the generic term for a wide r...