Medical foods can be defined as specialized nutrient formulation to be consumed or administered enteral under the supervision of a healthcare practitioner. Medical foods are intended for the specific dietary management of a disease or a health condition. Moreover, majority of medical foods market is concentrated in the U.S. and Europe, owing to presence of key players in these regions such as Nestle Inc., Yakult Honsha Co., Ltd., and others.

Furthermore, growing awareness among individuals about medical foods, owing to the increasing health benefits of medical foods containing prebiotic and probiotics factors and increasing focus of market players on marketing of medical food product are expected to drive market growth over the forecast period. For instance in March 2018, Yakult Honsha Co., Ltd., is a probiotic manufacturing company conducted the ‘Yakult: Keep Drinking to Feel the Difference’ campaign, which contributed to higher sales of the company’s products in Japan.

Increasing demand for medical food due to individuals suffering from gastrointestinal diseases is expected to drive the U.S. medical foods market during the forecast period. For instance, according to the Centre for Disease Control and Prevention (CDC), 2017, clostridium difficile infection is one of the most common healthcare-associated infections in the U.S. that affects over 500,000 people, and results around 15,000 deaths annually.

Furthermore, increasing incidence and prevalence of Crohn’s disease in the U.S. is expected to drive the market growth over the forecast period. For instance, according to the Centers for Disease Control and Prevention’s 2018 statistics, an estimated 3 million adults in the U.S. were diagnosed with an inflammatory bowel disease (Crohn’s disease or ulcerative colitis) in 2015. This was a significant increase from the estimates in 1999, which accounted for 0.9% of the U.S. population, or 2 million adults.

However, stringent regulations for product approval are expected to hinder growth of the U.S. medical foods market during the forecast period. For instance, according to the U.S. FDA guidelines published in 2016, probiotics cannot be marketed to cure, treat, and prevent any diseases. Moreover, according to the guidelines, probiotic products proposed for investigational use need to be lawfully marketed as conventional food or dietary supplement. 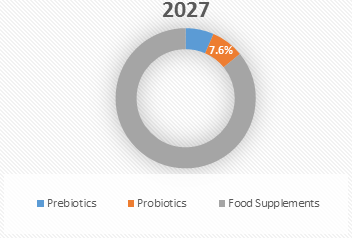 Medical food with prebiotics and probiotics is expected to gain significant traction among consumers in U.S. due to health benefits associated with it. Probiotics offers beneficial microbiome for the body, which are essential for improving metabolic process. Increasing popularity of prebiotic and probiotic based food is evident from rising sales of these products globally. For instance, Yakult Honsha Co. Ltd., a supplier and manufacturer of probiotic drinks, sold 373 thousands bottle of probiotic drinks per day in the U.S. during January 2019 to June 2019. Moreover, Yakult Honsha Co. Ltd., is also focusing on expanding the consumer base for its low calorie products. For instance, in August 2019, the company expanded sales of Yakult Light, a probiotic drink in 15 states in the eastern U.S. to increase awareness of its products among health conscious consumers.

Furthermore, key players in the market are focusing on geographic expansion, in order to increase their market presence in the developed market. For instance in July 2019, DuPont, a U.S.-based chemical company inaugurated its new fermentation unit at its facility in New York, U.S., in order to expand its production of probiotics, and offer health and nutrition products in New York market.

A medical food is specifically formulated for patients, who require medical food as a major part of their dietary supplement during treatment. Medical foods are available in different forms such as powders, liquids, and even gum. Although medical foods can be used as acute care therapy in prehospital care, short-term stabilization and it can be administered enteral during an inpatient visit. Moreover, medical foods are more commonly used to treat chronic conditions and diseases through long-term use in an outpatient setting.

Medical foods are also used in the treatment of other gastrointestinal diseases such as diarrhea, constipation, gastroenteritis, peptic ulcer diseases, and colorectal cancer, which is expected to propel market growth over the forecast period. For instance in July 2019, Georgetown University entered into a collaboration with National Center for Complementary and Integrative Health (NCCIH) University of Maryland, Baltimore initiated early phase 1 clinical trial to demonstrate the mechanisms of preventing antibiotic-associated diarrhea and the role of probiotics.

What are the growth estimates for U.S. medical foods market till 2027?

Which are the prominent U.S. medical foods market players?

What are the key factors hampering growth of the U.S. medical foods market?

Stringent regulations for product approval is one of the major factors that is expected to hamper growth of the market over the forecast period.

What are the key factors driving growth of the U.S. medical foods market?

Increasing prevalence of gastrointestinal diseases and Crohn’s disease in the U.S., coupled with rising awareness about prebiotics and probiotic products are some of the major factors that are expected to propel growth of the market over the forecast period.

What is the current U.S. medical foods market size?

What is the Compound Annual Growth Rate (CAGR) of the U.S. medical foods market for next 8 years?