Algae are photosynthetic eukaryotic organisms that grow in aquatic climates and use light and carbon dioxide (CO2) in order to create biomass. The market demand is continuously growing for macro algae and micro algae food, owing to the functional benefits beyond the traditional considerations of health and nutrition. Furthermore, algae has the ability to offer higher oil yield as compared to biofuel feedstock containing sorghum, corn Stover, beet, and corn. Thus, creating immense opportunities for growth of the global algae market. Growing research and development activities among manufacturers is expected to fuel the market growth. Increasing demand for reliable, sustainable, and low-cost sources of energy to ease the petroleum supply chain and to meet the increasing demand from aviation and automotive sector are major factors expected to drive growth of the global algae market during the forecast period.

Moreover, the demand for algae in the plastic industry to manufacture biodegradable plastic, is another factor boosting the market growth. Increasing use of algae in various applications such as food & beverages, pharmaceutical, nutraceutical, cosmetics, fertilizer, and others is projected to propel the demand for algae over the forecast period.

Algae extraction and production involves high-cost equipment and expensive techniques. High investments in R&D for improving the production techniques to reduce cost by the government and companies is expected to serve as a major opportunity for the market.

The U.S. Department of Energy (DOE) encourages the production of fuels to blend stocks derived from biomass. This feed stock is applied in fundamental research that advances biomass conversion, production, and sustainability. For instance, the National Renewable Energy Laboratory (NREL) investigates economic production of these fuels, which includes technologies such as algal biomass systems and terrestrial biomass.

Furthermore, companies are adopting various strategies such as mergers & acquisitions and product developments, in order to expand the company business, and retain their position in the competitive business environment. For instance, in June 2017, ExxonMobil announced company merger with Synthetic Genomics Inc. to expand the company research into developing advanced biofuels including modification of an algae strain, which doubled its oil content from 20.0% to over 40.0%, inhibiting strain’s growth.

North America accounted for the largest market share in the global algae market in 2018. This is owing to the increasing use of algae in feed additives. Furthermore, Asia Pacific is predicted to record the fastest growth over the forecast period, attributing to rising spending of the populace on cosmetics and skincare products in the region.

According to International Trade Administration (ITA)’s report on personal care & cosmetics market, published in 2016, consumers in Australia invested around US$ 882 million on online cosmetic purchases in 2015. Algae is used in cosmetics products as it promotes blood circulation, regulation of sebaceous gland function, and moisturizes skin. Algae is also used for treatment of skin problems such as pigment disorders, tanning, and aging. 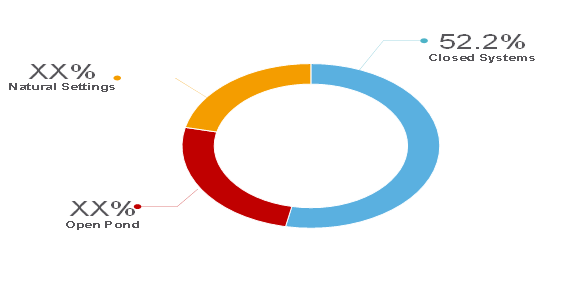 Based on application, in 2018, food & beverage segment held the largest share in the global algae market. In 2018, the segment contributed around 21.0% of the total revenue share in the algae industry worldwide. Algae is rich in fiber, particularly macroalgae, which are used to prepare food. Most of the edible macroalgae or seaweed are grown in marine algae, while freshwater algae are toxic in nature. Seaweeds are eaten across the globe, though it is mostly consumed in China, Japan, and Korea, owing to which the market share of algae in food segment is maximum for Asia Pacific. According to the Food and Agriculture organization (FAO), in 2012, China produced 257,640 tons of seaweed, which exhibited 23% of total seaweed production of the world.

Algae is a diverse group of organisms ranging from unicellular to multicellular. The complex and largest marine algae are called seaweeds. The algae consist of chloroplast, which is similar to cyanobacteria in structure. Algae has its wide applications in agar, alginates, fertilizer, energy source, nutrition, pigments, and bioremediation. Algae has wide range of usage in terms of pollution control. It is used as an alternative for toxic chemicals to treat sewers, to capture fertilizer runoff in farms, and to treat water in ponds and aquaria.

The term “algae” covers many different aquatic organisms that are capable of producing oxygen through photosynthesis. Algae plays a vital role in our environment and well-being as they produce half of the oxygen in the earth’s atmosphere. Furthermore, algal biofuels are a promising replacement to fossil fuels, owing to its ability to produce energy-rich oils. This scenario is predicted to generate higher demand for algae in the near future.

What are the growth estimates for algae market till 2027?

Which are the prominent algae market players across the globe?

What are the key factors hampering growth of the algae market?

High cost of production of algaeis one of the major factors that is expected to hamper growth of the market over the forecast period.

What are the key factors driving growth of the algae market?

Extensive applications of algae in various industries such as renewable energy, food & beverages, cosmetics, water treatment, agriculture, and biopharmaceutical & nutraceutical industryis one of the major factors that is expected to propel growth of the market over the forecast period.

What is the compound annual growth rate (CAGR) of the algae market for next 8 years?

Which region held the largest market share in the algae market?

Among regions, North America accounted for the largest market share in the global algae market in 2018.